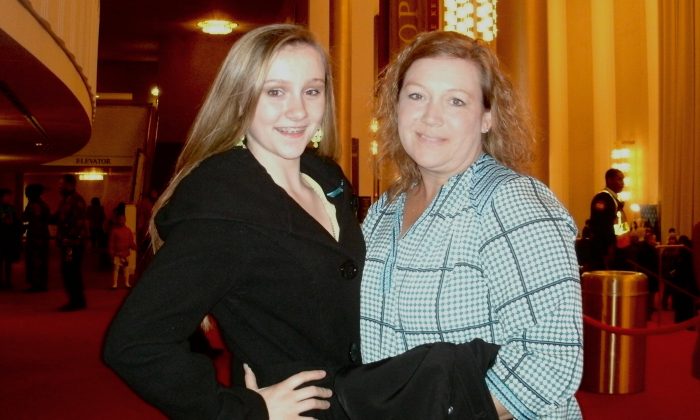 WASHINGTON, D.C.—When it comes to dance, Christie Puhalla is a complete pro, having started at the age of four. Now she teaches at three different studios in the Maryland and Virginia area.

“My specialty is contortion and acrobatics but I teach lyrical, jazz, tap, all different versions. I have danced competitive dance, and then ballroom dance, and now I teach competition dance. And I’ve been teaching for a little over nine years,” she said.

And yet, she says seeing Shen Yun perform at the Kennedy Center Opera House on Feb. 18 makes her a better teacher and even a better person.

Through music and classical Chinese dance, Shen Yun aims to bring the heart of ancient China’s culture—a culture that valued principles such as mindfulness of others, truthfulness, and respect for gods—to the world.

Ms. Puhalla saw those principles reflected in the dancers’ performance. “You can be a technical dancer and learn the technique of dance. But I think to perform and to tell a story, you have to have a connection to the emotional end of what you’re trying to emote or tell … I just think it’s inspirational to see different styles and different forms,” she said, adding that the technique was amazing as well.

“You have very skilled dancers in this performance. Very impressive, very impressive. Nothing but positive things to say.”

Her daughter, Laney Puhalla, also a dancer currently attending high school was also in awe. “It was a very captivating and such an elegant performance. It’s amazing and very fun to watch,” she said. “They are portraying the characters so well, and really unveiling the story.”

In many of the story-based dances, deities visit from the heavens via the digitally animated backdrop and then appear on stage as the dancers take over those roles.

A dance that stood out for her “was “The Lady of the Moon.” She’s an incredible dancer, performer. It’s just a beautiful story,” said Ms. Puhalla. In the story, a woman ascends to the moon to join a beautiful fairy palace, but due to unfortunate circumstances has to leave her husband behind on earth.

Ms. Puhalla also noted the unfortunate circumstance that the traditional Chinese culture Shen Yun portrays is not tolerated by the communist regime.

She feels “a little sadness that China doesn’t embrace all of it because it’s so beautiful. I can’t imagine anybody not embracing the story, the culture, just everything that the show embodied,” she said.

New York-based Shen Yun seeks to revive the sense of divine inspiration through classical Chinese dance and music, after systematic campaigns like the Cultural Revolution almost destroyed the traditional culture in China.