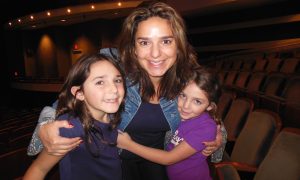 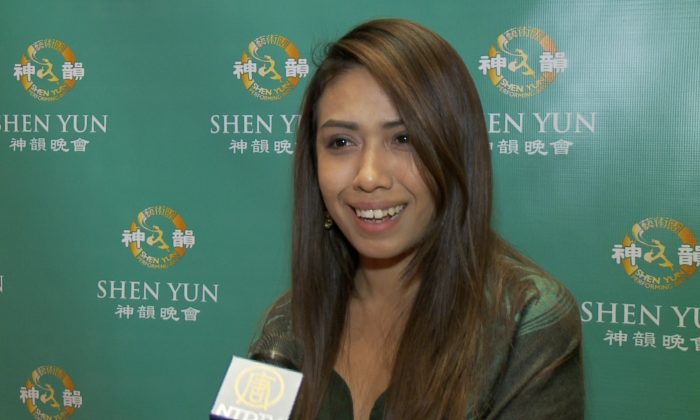 Dance teacher Jessica Rangel was impressed at the coordination and synchronicity of the Shen Yun dancers when she saw a performance at Jones Hall for the Performing Arts, Jan. 1, 2015. (Courtesy of NTD Television)
Company

The dancing and choreography impressed professional artists in the audience.

Dance teacher Jessica Rangel was noted how precisely coordinated the dancers were with one another, given how complex the choreography was.

“Everyone has a different count and yet they ended together and they started together. The counts they have to meet up with, they’re completely in touch. I love it, it’s amazing,” she said.

Dancers receive intensive training in dance fundamentals and then need to master difficult movements and tumbling techniques, which include different flips and leaps, and hundreds of complex movements and postures, according to the Shen Yun website.

One of the hallmarks of classical Chinese dance is its ability to convey profound emotions. To attain this depth of expressivity dancers cultivate bearing or yun, which refers to the dancer’s intent, breath, and personal aura. Bearing is what gives the same movement done by a different person, a different feel.

Ms. Rangel thought the dancers had a high level of concentration, and she enjoyed the story-based dances from Chinese history.

“You can tell they’re very focused on what they’re doing,” she said.

“I think it’s something different, something new. My personal background is Mexican. And we don’t necessarily have that, necessarily see that very often, so to see a story through a dance, I think it’s beautiful, very beautiful.”

“It’s phenomenal. It’s amazing. Seeing the combination of dances, dance styles. I really enjoyed the formation changes, the transitions. I enjoyed the cleanliness of it overall, he said.

In addition to classical Chinese dance, Shen Yun also performs ethic and folk dances from around China. During the performance, dancers don hundreds of colorful hand made costumes.

“The costumes enhanced the effect—the wow effect to it,” Mr. Fierro said.

He said he found the dances inspiring and was impressed to learn that gymnastics derives a lot of its flips from classical Chinese dance.

“Am I inspired by any of the dances? Yeah, definitely, definitely. I actually didn’t know tumbling and gymnastics were derived from classical Chinese dance. I’m impressed with that.”