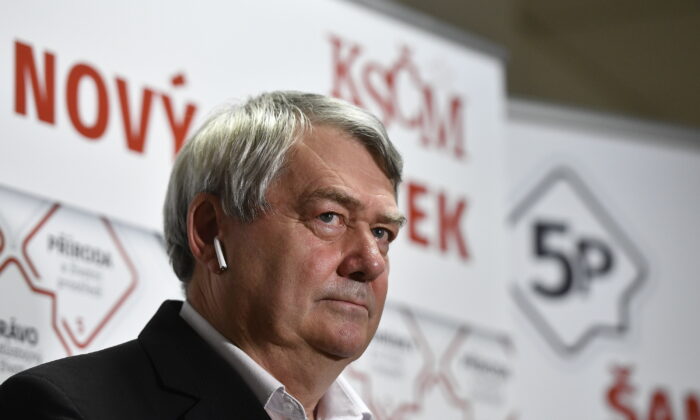 Chairman of the The Communist Party of Bohemia and Moravia (KSČM) Vojtech Filip talks to the media after the parliamentary election in Prague, Czech Republic, on Oct. 9, 2021. (Radek Petrasek/CTK via AP)
Europe

Czech Voters Oust Communists From Parliament for 1st Time Since 1948

On Oct. 9, Czech voters booted the communists out of Parliament for the first time since the end of World War II, voting out a party with Soviet-backed predecessors that ruled the central European nation with an iron fist from 1948 until 1989’s Velvet Revolution that ushered in democracy.

The Communist Party of Bohemia and Moravia (KSCM) failed to retain enough seats to enter the Czech Parliament for the first time since the formation of the Czech Republic after Czechoslovakia was peacefully dissolved into two nations in 1993, with the other state becoming Slovakia.

The KSCM took 3.62 percent of the vote, failing to meet the 5 percent mark needed to retain seats in both the House and the Chamber of Deputies.

The center-left-liberal coalition of the Pirate Party (PIR) and the Mayors and Independents party (STAN) received 15.6 percent of the vote, finishing in third place, according to the statistics office.

The failure to secure enough votes comes amid waning support for the communist party, who, during their reign, jailed tens of thousands of people in forced labor camps in the 1950s and brutally repressed dissidents, including playwright-turned-president Vaclav Havel.

“It pleases me. It pleases me a lot,” said Jiri Gruntorad, 69, a former dissident who signed the dissident Charter 77 statement and was jailed for subversion from 1981 to 1985 by the communist regime. “But it’s coming too late.

“It was one of the last communist parties in the world apart from the Chinese and Cuban ones that held on to its name.”

While the communists largely faded into the background after 1989, they did still cooperate with other parties seeking votes to pass legislation in Parliament. They also worked to appeal to senior citizens and working-class members of the republic, but failed to resonate with younger voters, given their previous totalitarian rule.

“I am very disappointed, because it is a really big failure,” said KSCM leader Vojtech Filip, who also resigned following the outcome of the vote.

The communists had also maintained a close relationship with current President Milos Zeman, who was rushed to the hospital on Oct. 10 following the latest election results.

Director Miroslav Zavoral of the Central Military Hospital in Prague said Zeman, 77, was admitted due to complications related to an undisclosed chronic condition.

“We know the diagnosis precisely, which allows us to target treatment,” Zavoral said, stating that he didn’t have the president’s approval to disclose details of the diagnosis.

The hospitalization is sure to create added uncertainty at a time when Zeman is set to lead political talks about forming a new government.

Under the constitution, the president can appoint anyone as prime minister and instruct them to nominate a Cabinet. A new Cabinet must face a vote of confidence in the lower house within a month of its appointment.

Prior to the election, Zeman had said that he would appoint the leader of the largest winning individual party, not a coalition, to try to form a government, which in this case would be Babis.

While Babis has conceded that the SPOLU alliance won more votes as a coalition, he didn’t signal a move into opposition.

“If the president authorizes me to do so, I will lead talks on forming a Cabinet,” he said.