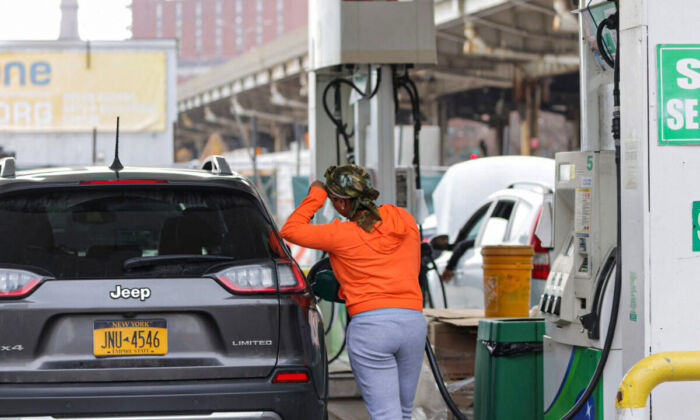 While the Environmental Protection Agency (EPA) is “standing on the accelerator to zero emissions,” the Biden administration is “colluding with large financial institutions and banks to deny capital that’s necessary to increase production,” Isaac stated, referring in part to an August 2021 policy put in place by the Biden administration to stop banks from lending to overseas fossil fuel projects.

Despite President Joe Biden’s statement that thousands of permits have been approved for oil drilling, Isaac said that permits and leases do not equal production because oil producers have to face “other regulatory hurdles” held up within the “Federal Energy Regulatory Commission and the EPA, because this administration is anti-fossil fuels, they are anti-American energy.”

Biden denied “holding back domestic energy production” at a March 8 press briefing, adding that oil producers have “9,000 [permits] to drill onshore that are already approved” but have chosen not to use them for production.

Isaac said the Biden administration needs to “embrace American energy and energy independence” so that markets will “start investing again in American energy production” and lower prices at the pump immediately.

Over the last two years major U.S. oil stocks have lagged behind the market as investors became reluctant to invest in fossil fuel stocks.

“Oil and gas companies do not want to drill more,” Pavel Molchanov, an analyst at Raymond James, told CNN. “They are under pressure from the financial community to pay more dividends, to do more share buybacks.”

According to The Wall Street Journal, energy suppliers are having to add “large-scale batteries to store more intermittent power during peak periods after the sun falls and wind dies” as backup methods to generate electricity. However, because “storage technology is somewhat new” and “relatively expensive,” it remains a small fraction of the electricity market.

While the Biden administration has advocated a transition to “clean energy,” Isaac said that America has reduced harmful air pollution by “78 percent in the last 50 years.”

Isaac also added that government subsidies into “unreliable renewable energy” have driven a surge of foreign investments into U.S. windfarms.

“The French government owns EDF Renewables, over 60 percent of that company, and they’re investing in wind farms in Texas. So in Texas, we’re subsidizing socialism. The Chinese communist government has purchased thousands and thousands of acres in Texas to build wind farms and solar farms,” Isaac said in a Feb. 22, 2021 interview with EpochTV’s “American Thought Leaders.”

Texas has since passed SB2116 to prevent China, Russia, Iran, and North Korea from accessing the state’s electrical grid, while Arizona passed SB1342 to ban the Chinese Communist Party from owning land in the state after a Chinese energy company purchased over 130,000 acres of land near Laughlin Air Force Base in Del Rio and had reportedly been “attempting to build a wind farm to access the U.S. power grid,” according to the legislation.

Meanwhile, Biden announced a ban on imports of Russian oil, liquefied natural gas, and coal at a March 8 press briefing, during which he said that the shift to clean energy will allow America to achieve “greater independence.”

Biden stated that “loosening environmental regulations or pulling back clean energy investment” will “not lower energy prices for families.”

“But transforming our economy to run on electric vehicles powered by clean energy with tax credits to help American families winterize their homes and use less energy, that will help,” he added.