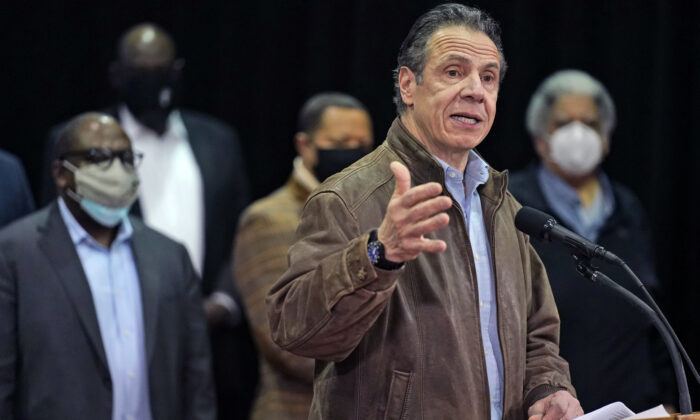 New York Gov. Andrew Cuomo speaks during a press conference before the opening of a mass COVID-19 vaccination site in Queens on Feb. 24, 2021. (Seth Wenig/POOL/AFP) via Getty Images)
US News

New York Gov. Andrew Cuomo again said he won’t resign after another woman came forward to accuse him of sexual harassment as the state’s attorney general completes an investigation into other allegations.

“I was elected by the people of the state. … I’m not going to resign because of allegations,” Cuomo said during a conference call, according to several reporters. “There is no way I resign.”

Critics, he said, should “let the attorney general do her job,” dismissing the resignation calls as political in nature.

At least five women have accused Cuomo, a Democrat, of inappropriate conduct. One of them, Karen Hinton—one of the governor’s former press aides—alleged that Cuomo called her to his hotel room and made inappropriate advances.

Hinton’s claims, he said, are “not true” and described her as a “long-time political adversary.”

His fourth accuser, Ana Liss, told The Wall Street Journal on March 6 that the governor kissed her hand, asked if she had a boyfriend, and made other remarks that she described as inappropriate.

“It was unintentional, and I truly and deeply apologize for it,” he said on March 3 during a press conference. “I feel awful about it and, frankly, I am embarrassed.”

Rich Azzopardi, a senior adviser to Cuomo, denied Liss’s claims, saying, “Reporters and photographers have covered the governor for 14 years, watching him kiss men and women and posing for pictures. At the public open-house mansion reception, there are hundreds of people, and he poses for hundreds of pictures. That’s what people in politics do.”

But Rep. Devin Nunes (R-Calif.), the ranking Republican on the House Intelligence Committee, told The Epoch Times this week that Cuomo is being targeted by Democrats and the media because it’s an attempt to distract from reports saying that his administration undercounted nursing home COVID-19 deaths.

New York Attorney General Letitia James in late January released the findings while an aide to Cuomo told lawmakers that Cuomo’s administration essentially withheld the nursing home data due to a Department of Justice investigation; Cuomo has denied wronging.

“Cuomo’s deadly policies on nursing homes have been well-known among conservatives for a long time,” Nunes said. “However, before the election, the legacy media ignored that story, instead perversely hailing Cuomo’s exemplary leadership in fighting COVID and praising his self-congratulatory book. It’s unclear why Cuomo’s team even bothered with a coverup, since the media was already doing it for them.”

Nunes suggested also that Cuomo may not be needed any longer by the Democratic Party.

“What’s changed is that Kamala Harris is now vice president, the de facto president, and the chosen standard-bearer for the Democratic Party,” Nunes said. “So the party’s power brokers are zeroing in on Cuomo as well as California Governor Gavin Newsom, who are her most likely rivals. Meanwhile, the legacy media is helping the party go after her competitors, while Big Tech is obediently lifting the filter from Cuomo and allowing the attacks to score.”