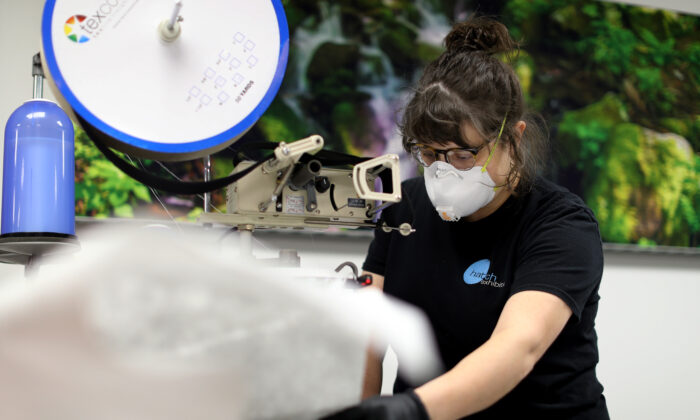 Cuomo: Medical Supplies That China Produces Should be Made in US

The state, like many others, has struggled to obtain enough supplies for the projected coming apex of  CCP (Chinese Communist Party) virus cases.

New York officials are still working on procuring supplies but in “a real cruel twist of fate,” China is the main manufacturer for many items.

“I don’t know how we got into this position.”

In another portion of the briefing, he sounded a similar alarm.

Governors in multiple states have complained that they’re engaged in a bidding war with the federal government as well as other countries for ventilators and other crucial equipment amid the COVID-19 pandemic. The CCP virus, commonly known as novel coronavirus, causes COVID-19, a disease that is killing one in 100 patients in the United States.

Top officials, including Cuomo, have called on President Donald Trump to wield power given through the Defense Production Act to force companies to produce certain goods. The federal government has become “the only hope” for states, according to the Democratic New York governor.

“That’s why the Defense Production Act came up weeks ago. Right? The Defense Production Act gives the president of the United States power to say to a company, you make this. The discussion was about ventilators. You also have a shortfall on gowns. American companies can make gowns. They’re not like wedding gowns. They’re like paper gowns,” he said.

“Make the gowns, make the gloves, make the masks. Why are we we running out of these basic supplies?”

Trump has said he used the act three or four times but pulled it back because the companies ultimately came through. In one instance, he used it to compel General Motors to produce more ventilators.

Ford, GE, ZOLL, and other U.S.-based companies are also producing ventilators, while Under Armour, Brooks Brothers, and MyPillow are among the companies making masks and gowns in domestic factories. Small companies have also shifted to producing medical equipment and supplies while numerous individuals across the country are producing supplies and donating them to hospitals.

Hospitals in the New York City area in particular have reported shortages of masks, gowns, and other equipment, especially facilities in some of the hardest-hit areas like Brooklyn and Queens.

City officials reported 44,915 total cases as of Wednesday morning, with 60 percent of them taking place in one of the two boroughs. Most of the city’s 1,139 deaths have taken place in Queens or Brooklyn, two of the city’s five boroughs.

The other boroughs are Manhattan, the Bronx, and Staten Island.

Prospective shortages of supplies prompted Trump to issue an executive order aimed at preventing the hoarding of N-95 masks, ventilators, medical gowns, and other items.