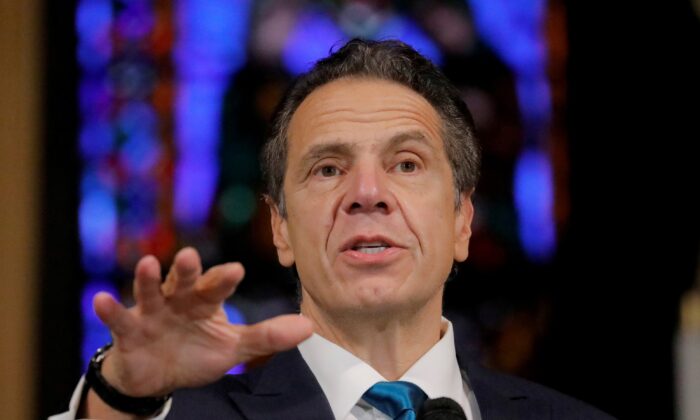 The admission of the alleged cover-up was made by Secretary to the Governor Melissa DeRosa during a video conference call with state Democratic leaders on Feb. 11, according to an audio recording obtained by The New York Post.

It comes ahead of new disclosure of data which reveals that nearly 15,000 nursing home residents died of coronavirus, much higher than the 8,500 figure previously disclosed.

DeRosa allegedly told Democrats that the administration feared the data could “be used against us” by the Justice Department (DOJ).

The DOJ announced it had opened an investigation on Aug. 26 into “governors of states that issued orders which may have resulted in the deaths of thousands of elderly nursing home residents.”

The states include New York, New Jersey, Pennsylvania, and Michigan.

In the conference call on Thursday, DeRosa reportedly admitted that they deliberately hid the data from state legislators after the Trump administration began asking questions.

“Eight around the same time, [then-President Donald Trump] turns this into a giant political football,” she said.

“He starts tweeting that we killed everyone in nursing homes,” she added.

DeRosa said Trump also, “directs the Department of Justice to do an investigation into us.”

“And basically, we froze,” she told the lawmakers on the call.

DeRosa added, “That played a very large role into this.”

She then asked lawmakers for “a little bit of appreciation of the context,” and offered an apology for the “political position” that Cuomo’s order put them in.

“We do apologize,” she told the officials.

“I do understand the position that you were put in. I know that it is not fair. It was not our intention to put you in that political position with the Republicans.”

The Cuomo administration issued a March 25 directive barring nursing homes from refusing people just because they had COVID-19, in an effort to free up space in hospitals that were overcrowded during the initial days of the pandemic.

Under the directive, 9,000 recovering coronavirus patients in New York were released from hospitals and sent into nursing homes, according to the Associated Press.

However, the controversial directive faced fierce criticism from nursing home advocates and families who claimed it accelerated the outbreak among the nursing home residents. It was subsequently scrapped on May 10.

The new numbers are 40 percent higher than the figures that the state Department of Health’s (DOH) had previously released.

Rich Azzopardi, a senior Cuomo advisor, appeared to place some of the blame on the Trump administration in a statement posted on Twitter on Thursday night.

“We explained that the Trump administration was in the midst of a politically motivated effort to blame Democratic states for COVID deaths, and that we were cooperating with federal document productions—and that was the priority,” he wrote.

“And now that it is over, we can address the state Legislature.”

However, DeRosa’s admission has prompted condemnation from Republican officials around the state, with many calling for further investigation.

Others are suggesting Gov. Cuomo resign or be removed from office.

Congressman Lee Zeldin (R, NY-1) issued a statement calling for the Department of Justice to open an obstruction of justice investigation.

“The families of thousands of dead New York seniors deserve accountability and justice for the true consequences of Governor Cuomo’s fatally flawed nursing home policy and the continued attempts to cover it up. It’s clear what’s happening here is criminal,” he said.

Elsie Stefanik, a Republican representing New York in the House, said Cuomo must be “prosecuted immediately,” by both the Attorney General of New York State and the U.S. Department of Justice.

‘This bombshell admission of a coverup and the remarks by the Secretary to the Governor indicating intent to obstruct any federal investigation is a stunning and criminal abuse of power,” she said in a statement.

Democrats also turned on the governor, with Jumaane Williams, the Public Advocate for New York City, posting on Twitter, ‘To continual defenders of @NYGovCuomo, how is this ok? How is it not #Trump like?”

“And when FORCED into admission, the most you get is a sorry we got caught…and not even directly from him or to the families All while asking NYers to trust your decisions.”

The Epoch Times has contacted Cuomo’s office for comment.