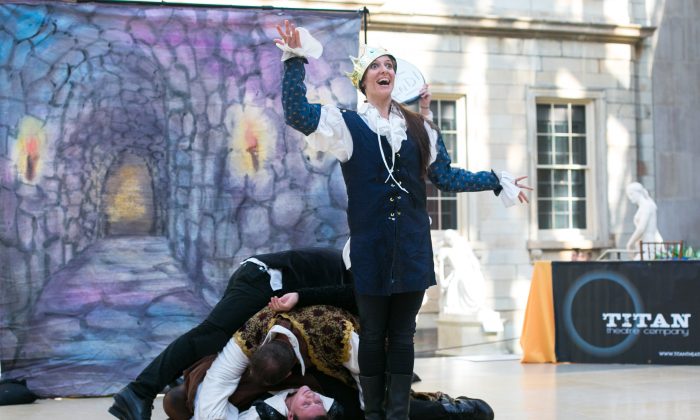 Actors from the TITAN Theatre Company perform "The Fifteen Minute Hamlet," a comedic rapid-fire take on the Shakespeare classic, at the Charles Engelhard Court in the Metropolitan Museum of Art in New York on Nov. 5, 2016. (Benjamin Chasteen/Epoch Times)
Arts & Culture

Spirited and upbeat music from the Afro-Caribbean music group Legacy Women welcomed visitors at the entrance of the museum, setting a festive tone for the full house of attendees the museum tends to draw on weekends.

The theme of the inaugural festival was Epic Stories, and performers sought to tell larger-than-life stories through art, with the goal of connecting cultures.

“In our genre, it doesn’t get more epic than ‘Hamlet,'” said Lenny Banovez, artistic director of the theater company Titan, which specializes in updated and accessible retellings of classic pieces. In the American Wing of the museum, the group put on Tom Stoppard’s “The Fifteen Minute Hamlet”—basically the “greatest hits” of the play, with all the memorable lines for those who know “Hamlet” and a primer to the classics for those who don’t.

The classics are universal: Love, joy, grief, sorrow—all the themes in “Hamlet” can also be found in everything from soap operas to political dramas today, Banovez added. And, the story works as both a tragedy and a comedy.

There was full-bodied laughter and actual knee-slapping from the audience, irrespective of age. Young children took to the front row for all of the different performances of the day, learning stories, new verses from songs, and words in other languages throughout.

“If this gets them really interested at such a young age to want to see more Shakespeare, then we’ve done our job,” said Laura Frye, co-founder of Titan, who was playing the Ghost, Horatio, Osric, the Gravedigger, and Fortinbras. The production is madness: Six people form the entire cast, costume changes happen in the midst of delivery, there’s a one-minute version of the play as an encore, and the actors still work to deliver the lines the way they were meant to be said in Shakespeare, knowing it’s all a comedy.

“We are just slightly walking that fine line between the way they would’ve been played with a little bit of that ‘SNL’ sprinkling in there, a little tongue-in-cheek in there,” she said.

Sophie Kirsch, in the audience, said, “It does really make sense, bringing live theater into a place that’s all about interacting with art.”

“It’s also not detracting from still art, and creating a good sense of motion in the galley itself. And it’s a good way to re-energize the people,” Kirsch said.

In the space for the Arts of Africa, Oceania, and the Americas, children and adults burst into song.

“The whole idea of Southeastern tribal singing is congregational,” Redbone said. “And it’s about bringing people together and inviting people to learn about who we are and to make people feel welcome.”

Music is universal, Redbone added, and she has always felt that no matter your message—whether it be family stories, pieces of your culture, or even something political—it has more reach through music.

At the Grace Rainey Rogers Auditorium, the East-West School of Dance performed songs and storytelling with colorful costumes, voice-over, and pantomime.

Performers told the story of Rama, a central figure in the Hindu epic “Ramayana.” It included exile, struggle for the throne, heartbreak, battles with powerful figures and magical beings, and ultimately peace and prosperity.

Surrounded by paintings from the Civil War era, Brooklyn-based storyteller Tammy Hall spoke of the African-American journey, recited poetry by Maya Angelou, and told an African folktale of an eagle that thought it was a chicken.

“Anything that will bring people together and help us understand that we are more alike than we are not alike will only facilitate world peace,” said Hall. “The more we love ourselves and we love our cultures, the more we are able to love others and other cultures.

Good storytelling is a conversation, Hall added. It keeps the audience engaged, and that enables the story to “take you out of your everyday norm; it transports you somewhere else.”

Sylvia Bradfield-Mitchell, an associate pastor in the audience, has dedicated her life to connecting different cultures and said she thoroughly enjoyed being able to listen to the stories being told at the museum.

“To me, knowing your story, where you come from, and the richness and the heritage that you have is something that I did personally, and now I have stories from my family members of black, Asian, all over the place. It is a way of peacefulness and reconciliation which the world so needs today,” Brad-Mitchell said. “If you know someone’s story, there is compassion.”

I think this is a festival that is going to grow not only in size, but in impact.
— Carol Frazer Haynesworth, founder, Black in the World

Hall created the program with Black in the World, and was able to highlight a slew of accomplishments of African-Americans that was little known to many. Carol Frazer Haynesworth, founder of Black in the World, had traveled around the world extensively from childhood and then as a journalist, and witnessed so many untold stories and what she realized was a knowledge gap about the existence and contributions of people of color.

“I think this is a festival that is going to grow not only in size, but in impact,” she said. “We are touching all these people who are already interested [in cultures], making an impression with them that also goes past the beautiful art.”

Throughout the museum, children were able to create arts and crafts, and adults could participate in discussions in various galleries.

“It’s one of the first times that we’re approaching cultural celebrations at the museums through cross-cultural connection and collection themes,” said Emily Blumenthal, senior educator with the museum. The Met often has festivals for one specific cultural celebration, like the Diwali: Festival of Light event, and the upcoming Lunar New Year festival in February. But this is the first of many festivals to come that will aim to bring together many different cultures.

The idea for Epic Stories came out of bridging together many of the exhibitions currently at the Met, like Jerusalem 1000–1400: Every People Under Heaven, and bringing in many other curatorial departments for conversations, and working with the Met’s partners.

The festival gives people an opportunity to get to know the museum in a different way, and really engage, Blumenthal said. It lets people “come in and make a connection, not only with works of art but with each other.”

“You get to see the museum as a creative space and as a lab for ideas, but also we can make connections to our personal heritages,” Blumenthal said.