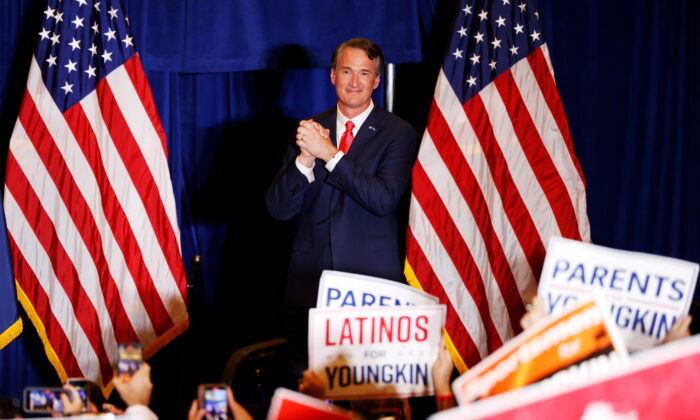 “I don’t think parents should be telling schools what they should teach.”

If there ever was a single sentence that cost a politician an election, it was former Virginia Democratic Gov. Terry McAuliffe’s quip in a Sept. 28 debate with Glenn Youngkin, his Republican opponent in the Nov. 2 election that cost McAuliffe a second term.

In September, according to Monmouth University polls of registered voters, Youngkin, a private-equity CEO who had no prior experience in politics, was trailing the widely popular McAuliffe 43 percent to 48 percent—reflecting a lead that McAuliffe had maintained throughout the entire summer. But by October, after McAuliffe had expressed his thoughts about parental control of children’s education, the two were in a dead heat. And on Nov. 2, Youngkin beat McAuliffe 51–49. This in a state that had turned decidedly blue, thanks to its burgeoning Northern Virginia population of well-paid Washington bureaucrats. Virginia had endorsed Democratic candidate Joe Biden for the presidency over then-President Donald Trump by 10 percentage points in 2020.

This bellwether election, heralding the coming midterms of 2022, had been billed as a referendum on Biden’s presidency, flailing amid rising inflation, a supply-chain crunch, and other economic problems. But what the Virginia election actually turned out to be was a referendum on cultural issues, especially as they pertained to schools. Among them was the role of critical race theory (CRT) in public-school classrooms—the idea that American institutions are tainted with “systemic racism” and that white people are unconscious racist oppressors—as well as policies allowing opposite-sex bathroom use by transgender students.

The “culture war” was supposed to be political death for Republicans. They were viewed in the media as having bet wrong during the mid-2010s on such social questions as same-sex marriage and restrictions on abortion. The Republican Party got “utterly thumped” in a “war of its own choosing,” Politico’s Bill Scher confidently wrote in 2014. He was surveying Republican opposition to mandatory insurance coverage for birth control (a key feature of Obamacare) and the party’s looking clueless and homophobic in the face of growing public support for gay wedlock.

What analysts such as Scher didn’t seem to realize was that although politically moderate Americans may have a laissez-faire attitude toward what consenting adults do on their own time, they’re generally, like most other people who become parents, extremely protective of their children. And in Virginia, as well as elsewhere across America, the COVID-19 pandemic closed public schools starting in 2020 and sent their students home for online learning. There, the parents of those students suddenly discovered exactly what their kids were being taught in their classrooms.

The news, documented on the Virginia Department of Education website as early as 2015, when McAuliffe was governor, wasn’t good. “Embrace Critical Race Theory,” a 2015 syllabus in a state-sponsored workshop for educators dealing with school-discipline problems declared. And although progressive politicians and their media allies insist that CRT is a maze of complex legal technicalities too sophisticated to be taught at the K-12 level, the Virginia DOE documents revealed that in fact, public-school teachers were being trained with taxpayer money to indoctrinate children in baseline CRT concepts.

Virginia’s suburban Loudoun County became a focal point of parental outrage. Located about an hour’s drive from Washington, D.C. and home to a burgeoning tech industry, it’s Virginia’s fourth-largest county by population and most affluent. Its voters cast their ballots 62 percent for Biden in 2020. Yet a critical mass of parents, learning from freedom-of-information requests that their tax dollars were paying for CRT coaching sessions for teachers, exploded last spring at meetings of the ultra-liberal Loudoun school board.

The parents included whites upset that their children were supposed to be treated like racial oppressors—and to hate themselves accordingly—but also many members of ethnic minorities who didn’t care to be regarded as victims and race antagonists. Some of those parents were otherwise politically liberal but outraged that their children were being indoctrinated in radical theories of perpetual racial conflict.

At around the same time, a Loudoun teacher with strong Christian beliefs was placed on leave for stating his refusal to abide by a school-district policy under discussion that would require school personnel to address students by their preferred-gender names and pronouns. The teacher is suing the school district. And as the Loudoun school board in June was debating a policy—since implemented—that would allow biologically male students to use girls’ restrooms if they wished, an angry father showed up at a school board meeting to complain that a boy wearing a skirt had sexually assaulted his daughter in the girls’ bathroom at her school. The father was arrested for causing a disturbance, after Loudoun school superintendent Scott Ziegler maintained that no such attack had occurred—even though the boy in question had been quietly transferred to another school, where he allegedly assaulted another girl. Later, a judge found the boy guilty of the first attack.

Throughout all of this, McAuliffe seemed tone-deaf. He dismissed Virginians’ concerns about CRT as a “right-wing conspiracy” and insisted it wasn’t being taught in Virginia schools, despite clear evidence to the contrary. He doubled down. As his campaign floundered during the final days before the election, he played the race card, accusing Youngkin of wanting to remove from the shelves of school libraries critically acclaimed books by black authors, such as Toni Morrison’s 1987 novel “Beloved.” A “racist dog whistle,” said McAuliffe of Youngkin’s campaign video. In fact, all that Youngkin had done was support a mother who in 2013 had objected to an assignment of “Beloved,” which features explicit descriptions of violent sex and may not be suitable for young people, as required reading in her teenage son’s literature class. McAuliffe had vetoed state legislation that would have allowed students to opt out of such assignments and been permitted to read alternative books.

Liberal Loudoun County didn’t flip Republican in the Nov. 2 election, but it did endorse McAuliffe by a significantly smaller margin—55 percent—than it had Biden last year. Elsewhere, Virginia voters proved they weren’t so racist after all by electing Winsome Sears, a black Republican woman and former Marine, as lieutenant governor in a separate race. A Republican Latino, Jason Miyares, was elected Virginia attorney general, and Republicans ended Democratic control of the Virginia House of Delegates, the state’s lower chamber. Across America, anti-CRT candidates swept school-board elections in numerous jurisdictions.

“Politics is downstream from culture,” the late journalist Andrew Breitbart famously said. The Democratic Party failed badly in Virginia on Nov. 2 because it failed to understand that culture means something to Americans, at least to American parents.