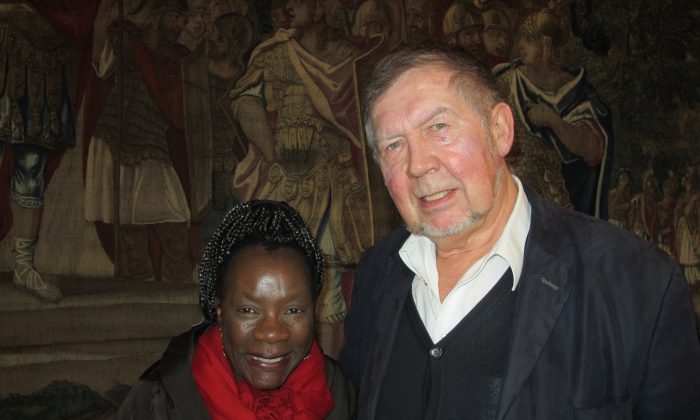 Elisabeth Boyi and her companion enjoyed the harmony displayed on stage at the Shen Yun performance in San Francisco on Jan. 9, 2016. (Abraham Thompson/Epoch Times)

SAN FRANCISCO—Elisabeth Boyi is all about cultural connections. At Stanford University, she taught comparative literature courses discussing thought, society, and culture between Europe and Africa. She was born in Zaire and schooled in France, Belgium, Portugal, and Italy; she taught in Congo and Burundi, and is fluent in nine languages.

So when she saw Shen Yun Performing Arts, with its mission to revive 5,000 years of ancient Chinese civilization, she was thrilled to learn about China through the company’s artistry.

“It’s a beautiful production the way they were, everyone, [able to] harmonize,” Ms. Boyi said at the War Memorial Opera House on Jan. 9. She noted the “equilibrium” in the way all the elements of the performance harmonized. The orchestra blends East and West, the colors complement in unexpected ways, and the choreography incorporates the use of an animated backdrop.

She said New York-based Shen Yun was both artistic and anthropological. After the performance ended, she and her companion discussed the traditional Chinese culture, which they saw many aspects of in the performance. For one, it is a very spiritual culture, she noticed.

The classical Chinese dance was also perfectly balanced in form. It is an independent dance system passed down through thousands of years, according to Shen Yun’s website, and has soaked up wisdom from every era.

“The sense of balance, equilibrium, measure, and at the same time there was some kind of exuberance in the performance,” Ms. Boyi said. “Overall I liked it very much.”