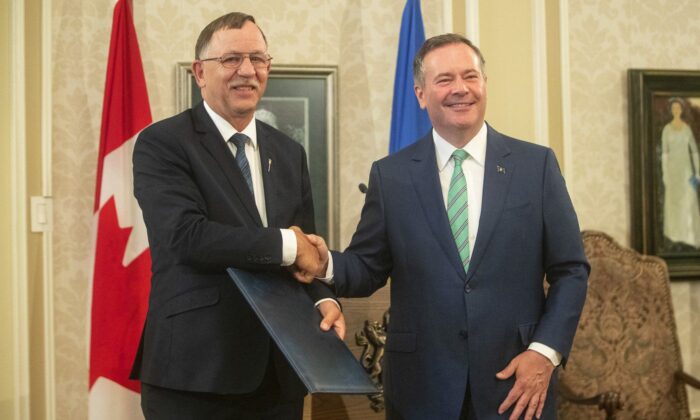 Alberta celebrated its inaugural birthday party holiday with Culture Minister Ron Orr chastising the prime minister and “Laurentian elites” while asserting the province has received the short end of the stick in the federation for more than a century.

“The family compact of Laurentian elites have always skewed the deal in their favour,” Orr told assembled dignitaries, including Premier Jason Kenney, indigenous leaders and Lt.-Gov. Salma Lakhani, on a sunny morning Thursday near the legislature grounds.

“There are many in our province who are frustrated … that Alberta has never really been granted that full fair deal with the federal government that was promised.”

Orr said Alberta has been treated unfairly from the start, noting it wasn’t granted provincial status until Sept. 1, 1905, almost 40 years after Confederation.

He said the unfairness continued with Alberta not gaining control of its natural resources until the 1930s, then facing a federal challenge to those resources in the national energy program of the 1980s, followed to this day with other policies deemed detrimental to the province’s golden goose industry.

“The attacks of our recent (Justin) Trudeau government on our energy, our resources, our wealth, our freedom—there are just so many ways that Albertans have struggled to achieve our full and our fair place in this Confederation,” Orr said. “But you know what? Albertans will succeed.”

He said Alberta has become one of Canada’s economic powerhouses “and we truly are the envy of the world in so many respects.”

“Happy Birthday, Alberta. That is what today is about,” Orr said.

Earlier this week, the province announced it is projecting to take in a record $28.4 billion in non-renewable resource revenues this year, delivering a $13.2-billion surplus for a province of 4.5 million people.

Kenney, who is stepping down as premier early next month once his party selects a new leader, recently announced the creation of Alberta Day, which is not a statutory holiday, to celebrate the province’s heritage and culture.

Events, concerts, activities and fireworks are scheduled throughout the province over the weekend.