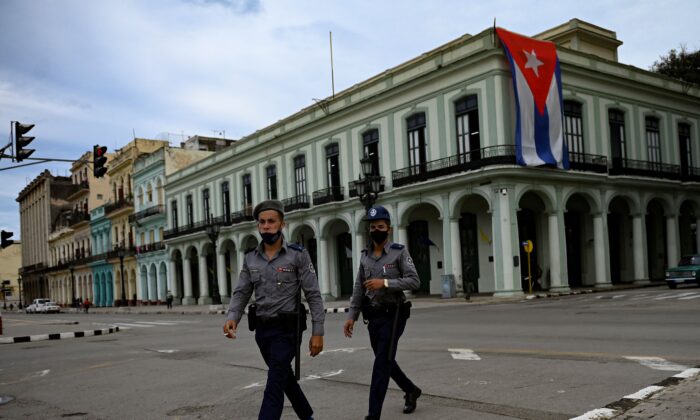 Cuba’s ruling Communist Party appears to have largely shut down anti-regime protests planned for Monday, while detaining and intimidating a number of activists, according to multiple reports.

Thousands of people were expected to take to the streets across the country this week as part of the “Civic March for Change” to demand greater political freedom and the release of jailed political activists.

The pro-democracy protests, organized by Archipelago, an opposition group headed by Cuban playwright Yunior García Aguilera, 39, have been banned by Cuba’s regime and leader Miguel Diaz-Canel.

On Sunday, Aguilera was blocked from leaving his own home after swarms of plainclothes police officers and regime supporters surrounded his apartment. His phone lines and Internet connection were also cut, the organizer told The Washington Post.

The activist waved a white rose from his apartment window and hung a sign reading “My house is blocked,” but regime supporters quickly raced to cover the side of his building and his windows with a giant Cuban flag, according to WaPo.

Human rights groups have also witnessed protest leaders being intimidated, threatened, and prevented from taking to the streets to demonstrate.

“We’re seeing an increase in the number of people who are being detained, and an escalation in the use of intimidation and threats of violence,” Laritza Diversent, the founder of the Cubalex human rights group, told Bloomberg.

A number of activists have shared video footage online showing their homes being surrounded by pro-regime crowds chanting “traitor” and “mercenaries.” Cuban journalist and blogger Yoani Sánchez wrote on Twitter that her Internet had been cut off.

Spain’s state-run news agency, EFE, said its reporters in Cuba had their work permits revoked, prompting Madrid to demand that all their credentials be returned.

Monday’s planned protests followed unprecedented uprisings in July, which were the largest on the island since Fidel Castro’s 1959 revolution, Reuters reported. The summer protests against a lack of freedom and worsening economic conditions saw the country plunged into an Internet blackout.

More recently, Cuba has also seen growing frustrations amid ongoing food shortages and high food prices in the midst of worsening economic conditions in the country, further exasperated by the COVID-19 pandemic.

The Cuban regime has accused this week’s planned protests of being part of a destabilization campaign by the United States, which maintains a Cold War-era embargo on Cuba. U.S. officials have denied the allegations.

On Sunday, U.S. Secretary of State Antony Blinken condemned what he called “intimidation tactics” utilized by the Cuban regime to crackdown on the protests, which also coincide with the reopening of the country after 20 months of pandemic-related lockdowns, and said that Washington will pursue measures that support the Cuban people and seek “accountability” for the regime’s oppression.

The secretary of state also urged the Cuban regime to respect Cubans’ rights and keep Internet and telecommunication lines open.

“In July, the people of Cuba bravely and spontaneously took to the streets to demand change from their government: respect for human rights, greater freedom of expression, and an end to economic mismanagement by an authoritarian regime that has failed to meet their most basic needs,” Blinken said in a statement.

“The Cuban regime responded with violence, censorship, arrests, and summary trials, denying their citizens their rights to freedom of expression and freedom of peaceful assembly.”

Blinken continued: “We strongly condemn these intimidation tactics. We call on the Cuban government to respect Cubans’ rights, by allowing them to peacefully assemble and use their voices without fear of government reprisal or violence, and by keeping Internet and telecommunication lines open for the free exchange of information. We urge the Cuban government to reject violence, and instead, embrace this historic opportunity to listen to the voices of their people.”