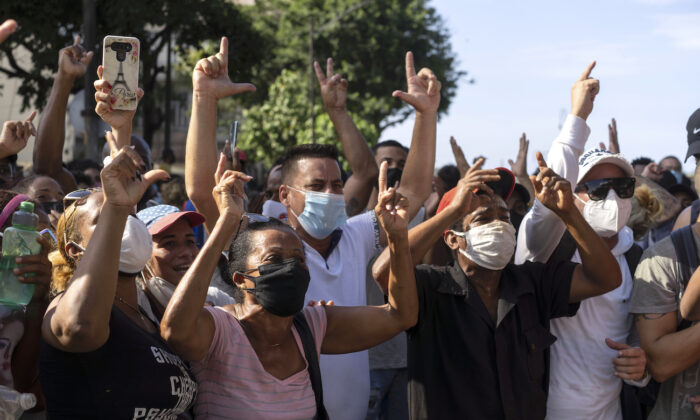 Cuba is accused of having adopted China-made technology systems to control and block internet access, amid reports that messaging apps and Cubans’ internet service are being blocked in the communist-ruled country after thousands of citizens took to the streets on July 11 to protest against a lack of freedoms and worsening economic conditions.

Sen. Marco Rubio (R-Fla.) warned in a July 11 statement on Twitter that the Cuban regime would “block internet & cell phone service soon to prevent videos about what is happening to get out to the world.”

Later in the day, he wrote: “I warned about this earlier today. It is happening and will continue. … By the way, they use a system made, sold, & installed by #China to control and block access to the internet in #Cuba.”

The Chinese Communist Party is a close ally and supporter of the Cuban regime.

Thousands of Cuban citizens took to the streets in several cities spanning the communist Caribbean island on July 11, calling for greater freedoms and an end to the communist dictatorship. They also protested against ongoing food shortages and high food prices amid worsening economic conditions in the country, made worse by the pandemic.

According to The Associated Press, protesters gathered at rallying points shared on popular social media platforms such as Twitter and Facebook. Authorities then began shutting down internet services in some cities on the afternoon of July 11 to prevent dissidents from broadcasting the protests live, the news agency reported.

The Open Observatory of Network Interference (OONI), a global internet censorship watchdog, reported on July 12 that Cuba had begun blocking WhatsApp, Telegram, and Signal messaging apps amid the protests.

Alp Toker, director of Netblocks, a London-based internet monitoring firm, told The Associated Press that Facebook, WhatsApp, Instagram, and Telegram had been blocked. Twitter didn’t appear to be blocked, but Toker said that the regime could cut it off if it wishes to do so.

Internet access has been limited and is expensive in Cuba. The communist regime announced in 2017 that it would gradually extend home internet services. In 2019, homes and businesses were allowed private Wi-Fi networks. Cubans were also given full mobile internet access in December 2018 via state telecom company ETECSA—the only company that provides internet access in the country.

But as a result, it has extensive control over communications. According to Human Rights Watch, the Cuban regime regularly stifles voices who publish information critical of the government by subjecting them to “harassment, violence, smear campaigns, travel restrictions, internet cuts, online harassment, raids on their homes and offices, confiscation of working materials, and arbitrary arrests,” as well as holding them incommunicado.

Freedom House rates Cuba as “not free” for internet freedom, giving it a score of 22 out of 100.

The Chinese regime has previously been implicated by various groups as potentially providing technology to the Cuban regime that is now being used in its censorship.

The Institute for War and Peace in December 2020 reported that ETECSA’s primary technology providers are three Chinese companies—Huawei, TP-Link, and ZTE.

OONI reported in 2017 that Chinese telecom giant Huawei was “found to be supporting Cuba’s internet infrastructure.”

“The server header of blocked sites, for example, pointed to Huawei equipment,” the report reads. “While it is clear that Cuba is using Huawei’s access points, it remains unclear whether and to what extent the company is actually implementing internet censorship in the country.”

The group also stated that it had found Chinese codes used for Wi-Fi access portals in Cuba, noting that the login portal of state-owned ETECSA contains in its source code “comments written in Chinese.” The report states that this “indicates that ETECSA likely hired Chinese developers to implement the portal.”

The report further notes that the server HTTP header contained “V2R2C00-IAE/1.0” which “appears to be associated to Huawei equipment called eSight,” a network management system.

This observation was also noted by Sweden-based nongovernmental organization Qurium Media Foundation in a June 2020 report.

“The presence of the V2R2C00-IAE header in some ‘Web Filtering’ responses suggests the presence of a NIP product (Huawei Intrusion Detection System) that sits inline in the network,” the report reads.