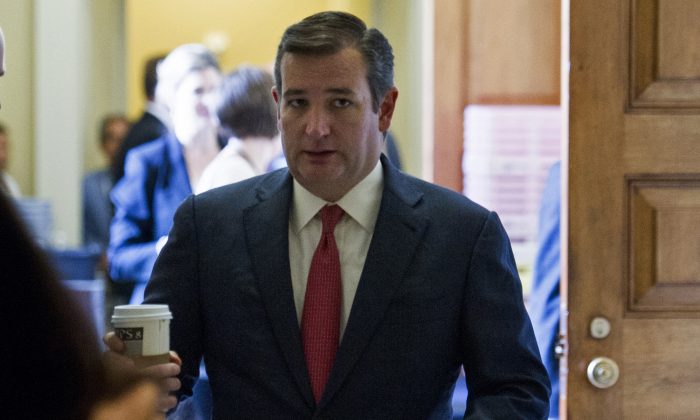 A raucous confrontation over rules that could have kept hope of an unlikely Cruz nomination alive ended in defeat, prompting many in his state’s delegation to chant angrily from the convention floor.

Before Trump even accepts the nomination, Cruz’s supporters as well as critics say undercurrents in Cleveland are emboldening the senator’s band of believers and stoking his 2020 prospects, should Trump lose in November.

So what Cruz says Wednesday during his prime-time convention speech will be closely watched for clues about his presidential ambitions.

“I’m hopeful it’s a speech that rings so true and so motivating that we think of 1976 and Ronald Reagan,” said Iowa Rep. Steve King, a Cruz supporter. King was referring to Reagan’s words after losing the nomination to Gerald Ford only to win the presidency four years later.

Should Trump lose, King said of Cruz, the speech will be “the marker for him as front-runner” for 2020.

Cruz halted his campaign two months ago, having outlasted all but Trump in a field that once numbered 17 candidates. He finished a distant second in the delegate accumulation during the Republican nominating campaign.

His supporters clung to hope that that the convention would adopt rules that would free delegates to disregard the results of state contests and swing behind Cruz at the 11th hour. That hope was quickly dashed in opening-day proceedings.

Easily spotted in their cowboy hats and Lone Star flag shirts, dozens of Texas delegates shouted their objection when the push to change the rules was declared defeated in a voice vote that sounded close to those in the hall. An effort to have the vote recorded also failed, leaving anti-Trump Republicans feeling mistreated.

“There isn’t a Band-Aid big enough” to heal the hurt that erupted Monday, said Cruz supporter Ivette Lozano of Dallas. But she was looking ahead.

“The plan is 2020, and we have an opportunity to do that,” said Lozano, a family practice physician.

Cruz is eager to be seen as the face of the modern conservative movement should Trump lose in November and create an open GOP field for 2020.

Besides his prime-time speech, Cruz plans to hold a delegate appreciation event Wednesday, and address the Texas delegation Thursday.

Cruz’s team drafted a convention speech focusing on adherence to the Constitution, a calling card for conservatives and a perceived contrast with Trump.

Cruz has not endorsed Trump. Nor is he expected to in his speech, which was carefully screened by Trump campaign officials, the senator’s aides said.

Ron Kaufman, a Republican national committeeman from Massachusetts, said the flare-up over rules was choreographed to demonstrate public support for Cruz and preserve his future. “These votes had nothing to do with Trump,” he said. “This is all about Ted Cruz trying to make the party smaller.” By smaller, he meant that Cruz supporters were pushing for primaries where only registered Republicans can participate. Cruz was more successful in such contests than in ones also open to voters who aren’t registered Republicans.

“The hope was more to encourage these conservative delegates and continue building the party from the grassroots,” Cuccinelli said. “But unfortunately that opportunity this time has passed us by.”

Cuccinelli’s response could be interpreted to mean another time may come.

The senator’s closest aides appear to be anticipating that, considering how they are staying in his immediate orbit.

Former campaign manager Jeff Roe and data guru Chris Wilson formed a firm in part to provide a home for the expansive Republican database the campaign built over the last year. Senior campaign strategist David Polyasnky has been named chief of staff to Cruz’s Senate office.

If Trump loses, former Cruz communications director Rick Tyler said, Cruz “has an opportunity to seize on this populist movement, to convince people he can deliver on the promise to ‘make America great again.’ “