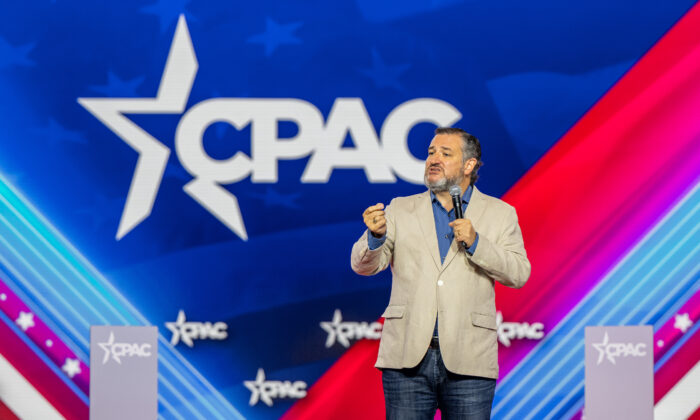 Sen. Ted Cruz (R-Texas) said he, like everyone else, is going to “wait and see” whether former President Donald Trump is going to run in 2024, before making his own decision about a possible bid for the White House.

“Everyone is going to wait and see what Donald Trump decides and make decisions from there,” Cruz told Fox News on Aug. 5 at the Conservative Political Action Conference (CPAC) in Dallas, Texas.

“He’s going to decide when he damn well wants to, and the rest of the world will react accordingly,” Cruz added.

In 2016, Trump garnered 1,441 delegates in state primaries and caucuses, before being officially nominated as the Republican presidential candidate. Cruz finished second with 551 delegates.

Trump has not made public announcements about running for president in 2024. However, during a speech at CPAC on Saturday, he hinted at a possible 2024 run when he said, “We may have to do it again.” Last month, he told New York Magazine that he has made up his mind about whether to run in 2024, but the “big decision” is when to make the announcement.

The former president is currently the favorite for the 2024 GOP presidential nomination. According to the results of a CPAC straw poll announced on Saturday, Trump won 69 percent of the vote, followed by Florida Gov. Ron DeSantis with 24 percent. Cruz finished a distant third with 2 percent.

In a head-to-head matchup for the 2024 race, President Joe Biden and Trump are locked in a “statistical dead heat,” according to a July poll by San Francisco-based data insights company Premise. The poll found Trump with 53 percent support compared to Biden with 47 percent.

Cruz has previously said he was thinking about the 2024 race for president. In an interview with Newsmax in July, Cruz said he was “certainly looking at it.”

“2016 was the most fun I’ve ever had in my life,” he continued, reflecting on his last presidential campaign. “We came incredibly close, had an incredible grassroots army.”

Speaking to Fox, Cruz said he is focusing on the 2022 elections at the moment.

Late last month, Cruz took part in a campaign rally in Cottleville to support Missouri Attorney General Eric Schmitt, who advanced to the November general election on Aug. 2 after winning the state’s Republican Senate primary. Schmitt is endorsed by both Cruz and Trump.

Schmitt will face Democratic primary winner Trudy Busch Valentine in November, to fill a Senate seat to be vacated by Sen. Roy Blunt (R-Mo.), who decided not to seek a third term in office.

Schmitt has previously voiced support for Cruz to be the Senate majority leader if the Republicans win back the chamber in November, while vowing not to support current Minority Leader Mitch McConnell (R-Ky.) for the position.

“Mitch McConnell was elected to the Senate in 1985. I think the party’s priorities changed pretty dramatically. And I don’t think he’s kept up with that,” Schmitt said in July, according to Fox News. “I’ve been endorsed by Sen. Ted Cruz, Sen. Mike Lee. I’d love to see one of them run. I would support that.”

Regardless of whether he will make another White House bid, Cruz emphasized he is “committed to fighting to save this country with every breath in my body. It is what I believe in.”

“What I have wanted to do my entire life is defend freedom,” Cruz continued. “And right now, what we’re seeing in Washington, it’s extreme. This is not in the kind of ordinary bounds of political discourse. This is radicals who are putting policies in place that are really hurting Texans and Americans.”