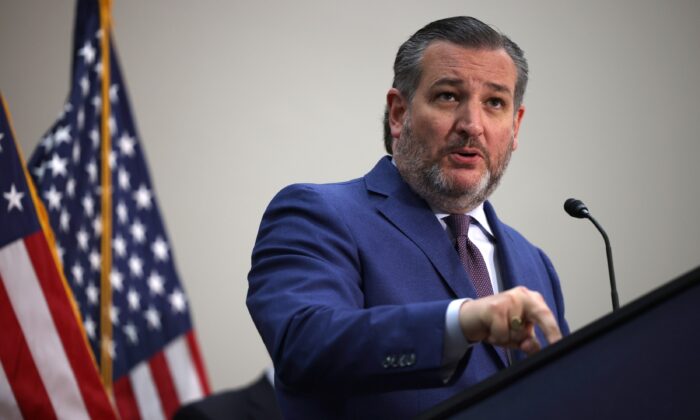 Sen. Ted Cruz (R-Texas) on Saturday accused the progressive “Squad” of acting as “press secretaries for Hamas terrorists,” as he announced that he is introducing a resolution backing arms sales to Israel.

“Rep. [Ilhan] Omar accused Israel of carrying out acts of terrorism. That is a vicious lie. And to be honest, the Squad is acting more like the press secretaries for Hamas terrorists than they are like United States congressmen,” Cruz said during an appearance on Fox News’ “Justice with Judge Jeanine.”

The Texas Republican was referring to a group of progressive women with a socialist agenda who became known as “the Squad,” including Reps. Alexandria Ocasio-Cortez (D-N.Y.), Ilhan Omar (D-Minn.), Rashida Tlaib (D-Mich.), and Ayanna Pressley (D-Mass.). They have supported the “defund the police” movement, “Medicare for All,” free college education, the “Green New Deal,” and other socialist policies.

The women come under fire in recent days for their controversial anti-Israel tweets as violence intensified between Israel and Hamas, a designated terrorist group since 1997, before a ceasefire agreement was eventually reached Thursday. The 11-day conflict started when Hamas launched rockets into Israel over a court case to evict several Palestinian families in East Jerusalem that triggered riots.

Ocasio-Cortez last week said President Joe Biden’s defense of Israel’s use of force to protect itself against the terrorist group was “siding with the occupation.”

“Israeli air strikes killing civilians in Gaza is an act of terrorism,” Omar wrote. “Palestinians deserve protection. Unlike Israel, missile defense programs, such as Iron Dome, don’t exist to protect Palestinian civilians. It’s unconscionable to not condemn these attacks on the week of Eid.”

Cruz said that their rhetoric makes them sound “more like they’re acting as press secretaries for Hamas terrorists than as members of the United States Congress defending American national security and the security of our allies.”

Mark Regev, an adviser to Israeli Prime Minister Benjamin Netanyahu pushed back at criticism from the group.

“People need to understand—Hamas is not just Israel’s enemy,” he added. “Hamas is the enemy of everyone who wants to see peace and reconciliation in our part of the world. They are a brutal jihadist terrorist group. No one should make excuses for them.”

Cruz told Fox News his resolution will show whether lawmakers are willing to “support Israel” or “sashay up to the anti-Israel left.”

“Let’s decide if you’re willing to send weapons to support Israel, or if you’re going to sashay up to the anti-Israel left, then you need to own it and I hope we’re going to have a vote next week and decide which side of the line everyone stands on,” he said.

The senator’s plans for a resolution comes after progressives, led by Sen. Bernie Sanders (I-Vt.), pushed to block a $735 million arms sales to Israel last week.

“I’m introducing a resolution to approve the arms sales, and I’m going to fight for a vote because there are a lot of Democrats in the Senate who want to play footsie, who want to say: ‘Well, no. I don’t agree with that antisemitic language from the Squad.’ Well, let’s vote,” Cruz added. “Let’s decide if you’re willing to send weapons to support Israel, or if you’re going to sashay up to the anti-Israel left, then you need to own it.”

The Epoch Times has reached out to Ocasio-Cortez, Tlaib, Omar, and Pressley for comment.