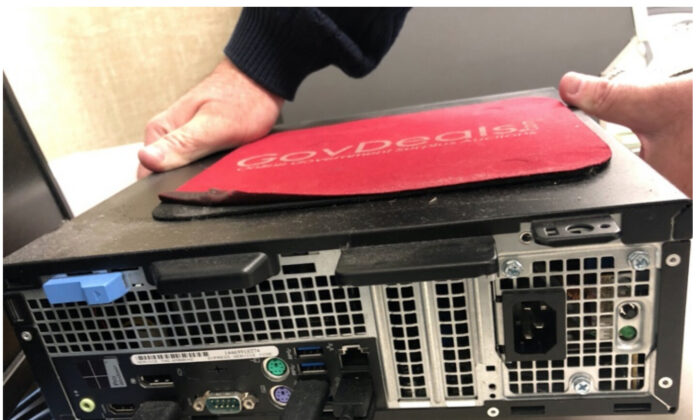 A court-sanctioned forensic audit of voting systems in Michigan’s Antrim County determined that crucial security and ballot-adjudication logs were missing from machines by Dominion Voting Systems, the company at the epicenter of the dispute over whether voter fraud occurred during the 2020 general election.

The findings are part of a preliminary forensic report (pdf) written by Russell Ramsland, a former Reagan White House official who has worked for NASA and the Massachusetts Institute of Technology. Kevin Elsenheimer, the chief judge of Michigan’s 13th Circuit Court, approved the report for release to the public on Dec. 14.

According to the report, both the ballot-adjudication logs and the security logs for the Nov. 3 general election appear to have been removed; logs for prior elections are still present on the machines.

The Michigan attorney general and secretary of state responded to the report’s release by describing it as “misguided, vague and dubious.”

“If the Trump campaign had any actual evidence of wrongdoing–or genuine suspicion thereof–they could have requested a hand recount of every ballot in the state,” Michigan Attorney General Dana Nessel and Secretary of State Jocelyn Benson said in a statement. “They did not, instead choosing to allow shadowy organizations claiming expertise to throw around baseless claims of fraud in an effort to mislead American voters and undermine the integrity of the election.”

Michigan Bureau of Elections Director Jonathan Brater, in a court filing, said the report “makes a series of unsupported conclusions, ascribes motives of fraud and obfuscation to processes that are easily explained as routine election procedures or error corrections, and suggests without explanation that elements of election software not used in Michigan are somehow responsible for tabulation or reporting errors that are either nonexistent or easily explained,” the Detroit Free Press reported.

Erik Grill, a Michigan assistant attorney general, told the judge on Dec. 14 that Ramsland’s preliminary report was “inaccurate, incomplete, and misleading.” Haider Kazim, an attorney for Antrim County, said the report contained several errors the county believes were based on “faulty assumptions and incorrect assumptions.”

ASOG examined Dominion products in Antrim County earlier this month as part of a lawsuit stemming from the post-election flipping of roughly 6,000 votes between President Donald Trump and former Vice President Joe Biden. The plaintiff, William Bailey, disputed the official explanation that the votes were shifted due to human error.

In addition to missing adjudication logs, the examination found that the systems are missing security logs prior to 11 p.m. on Nov. 4.

“This means that all security logs for the day after the election, on Election Day, and prior to Election Day are gone. Security logs are very important to an audit trail, forensics, and for detecting advanced persistent threats and outside attacks, especially on systems with outdated system files,” Ramsland said.

“Other server logs before November 4, 2020, are present; therefore, there is no reasonable explanation for the security logs to be missing.”

The Amistad Project, an election integrity group, filed evidence preservation requests in five battleground states in response to the findings of the Ramsland report.

“We’re filing in all swing states a demand that judges step in and preserve evidence to avoid it from being destroyed or spoiled by the intentional or reckless acts of executive officials,” said Phill Kline, the director of the project.

“The error rate detailed in this report has implications for every state where we have litigation, and it comes on a day when officials are blocking legislators from having their say about elections in their states,” Kline said in a statement. “This joins with other compelling evidence that the elections in these states cannot be certified under the law.”

According to Ramsland, the errors unearthed during the forensic exam appear to be a feature, rather than a bug.

“The system intentionally generates an enormously high number of ballot errors. The electronic ballots are then transferred for adjudication. The intentional errors lead to bulk adjudication of ballots with no oversight, no transparency, and no audit trail. This leads to voter or election fraud,” Ramsland wrote.

The preliminary report didn’t include the underlying data ASOG examined. Ramsland had previously filed an affidavit with a major error in it as part of an election lawsuit brought by Lin Wood. The affidavit mixed up counties from Minnesota and Michigan.

‘Votes Can Be and Were Changed’

Kosloski told the auditors that Connie Wing of the County Clerk’s Office instructed her on Nov. 5 to retabulate the ballots that were counted on Nov. 3. The second tabulation altered an estimated 1,474 votes in a precinct where a total of 1,494 votes were cast, the auditors estimate.

The massive shift included a school board race in which one candidate gained 742 votes and another lost 657 votes, printed tapes provided to the auditors show. In another school board race, 657 votes vanished in a second tabulation of a race that had 663 votes cast on the first count.

When the auditors visited the Antrim County Clerk on Dec. 6, they discovered that two different versions of election software were used for the machine that tabulated the Central Lake Township ballots. In total, the use of the two software versions altered more than 60 percent of the votes, “inexplicably impacting every single election contest in a township with less than 1500 voters,” the report states.