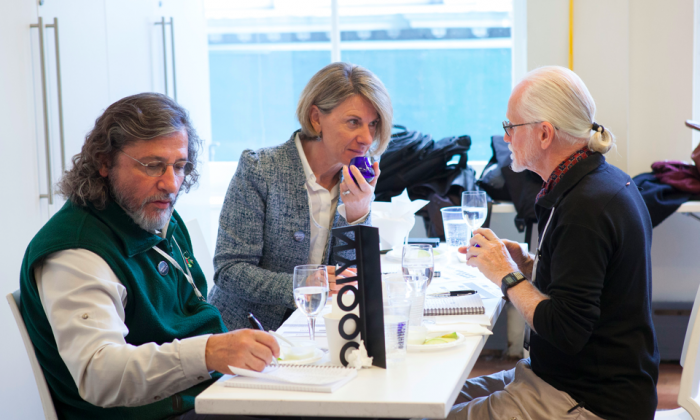 Judges swirled, sniffed, and sipped about 650 samples over four days. There was the sound of the liquid being aspirated, of “shhhhlurps” spraying into all the corners of the mouth. The small glasses were tinted blue to hide the liquid’s color.

Some samples were more on the grassy side, some fruitier, some with hints of nettles, tomato, mint, or apple.

It could have been mistaken for a wine tasting competition. But, it is olive oil that has truly taken its place as a fiercely competitive global market.

This year, at the second annual New York International Olive Oil competition, entries came not only from Italy and Spain but also newcomers whose culinary heritage includes zero drops of olive oil—China, India, and Japan, for example. Within the United States, California has long been a producer, but Arizona and New Mexico also sent in entries.

Curtis Cord, the publisher of Olive Oil Times and president of the competition, presented the winners at the International Culinary Center on April 10. A distinguished panel of judges included Antonio Lauro from Italy, Fabienne Roux from France, and Paul Vossen from California.

Of the 651 olive oil samples that were analyzed, 254 medals were awarded.

Italy won the most Best in Class awards, followed by Spain and Australia.

In terms of winning percentages, 52 percent of Portugal’s entries won awards; 50 percent from Spain; 47 percent from Italy; and 45 percent from the United States.

Greece had 128 entries, but won awards for about 15 percent of its entries. Three olive oils from Mexico won gold medals, out of six entries, while all of Slovenia’s entries were awarded.

Parlaying awards from an international olive oil competition is one way small producers who are producing excellent high quality oils can set themselves apart from mass-produced olive oils.

Some producers in the competition have been in business for a long time, for example Badia a Coltibuono, which was the first Tuscan extra-virgin olive oil to be introduced to the U.S. market, over 30 years ago.

Others are relative newcomers, such as Casa 3 Danesi, from Tuscany, which is in its second year of production and first year of selling. Owners Henrik and Gioanna Brorson, who won a gold medal for the oil, produced about 150 liters, or about 33 cases, last year.

Though based in Miami, they fell in love with Tuscany some years ago, she said, and decided to purchase a farm whose small-scale olive oil production goes back to 1790.

They have aimed their sales at restaurants and high-end retailers, currently selling their olive oil in Denmark, where they are from, and two Italian restaurants in Miami.

“This is our passion, we love to do this and it is not only a way of making money,” said Gioanna.

Where Artisans Meet the Market

What’s at stake for producers in the competition is not only recognition, but ultimately the bottom line, and possibly being picked up by a distributor, which is tough in a market that is largely dominated by multinationals.

Cord said, “I get a lot of people who say, this changed my business, this got me into this place or that place.” He said Fairway Market, as well major distributors such as KeHE, use the competition’s list of winners as a shortlist.

Fairway, a sponsor of the competition, now carries 18 of last year’s winners, all small producers.

Steven Jenkins, Fairway’s master buyer, said, “The whole purpose of this, is to find a market for all these tiny producers who are competing against these behemoths that are ruthless.”

“Everything is refined. Everything is not as good as it could be. So events like this are to forestall the eventuality in our lifetime that everything is going to taste the same. You won’t be able to taste the difference between olive oil and butter, between one cheese and another, between one animal’s flesh and another. … That’s sad and that takes all the beauty out of everything. So we’re here to throw a wrench in the works of the world, to slow things down and we’re committed to it,” Jenkins said.

For consumers, it comes down to this: how to navigate the shelves and choose a high-quality extra-virgin olive oil in an industry where misinformation and mislabeling are commonplace. Appellations of origins, and award labels are one way to help discern quality.

And one hint: Don’t go by how eye-catching the bottle is.

Design and packaging is the next frontier in marketing olive oil—including mediocre olive oil. Jenkins bemoaned that for consumers who don’t know much about olive oil, choosing one comes down to looks.

“People, like the Greeks, that don’t produce so much good oil in my not humble opinion, have sidestepped the fact that the oil isn’t that good with extraordinary design. And you would think that design with olive oil packaging would come from the Italians and the French, but it is not.

It’s coming from the Greeks and the southern Spaniards, who are coming up with the most remarkable bottles, containers, logos, artwork for their graphics.”

The list of winners can be found at www.bestoliveoils.com, and includes the judges’ tasting notes, as well as links to the producers’ and retailers’ websites.