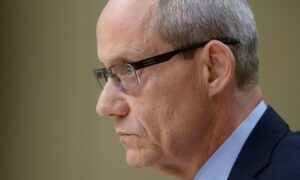 MONTREAL —The Crown maintains the warrant issued for the arrest of former hockey great Guy Lafleur in 2008 was justified considering the seriousness of the crime.

Prosecutor Lise Archambault told Lafleur’s civil trial Wednesday the warrant was also issued to ensure Lafleur would tell the truth in the future.

The Montreal Canadiens legend is seeking $2.16 million in a civil suit against the Crown and Montreal police for an arrest he calls unjustified and exaggerated.

He was arrested and found guilty in 2009 of giving contradictory testimony at his son’s bail hearing on sex charges.

The conviction was overturned on appeal in 2010.

While there have not been many criminal cases involving contradictory testimony, Archambault said she felt it was a very serious criminal offence.

The prosecutor testified telling the truth in court is the foundation of the justice system.

Archambault said the prosecutor’s office studied the case and was sufficiently convinced the two declarations made by Lafleur were contradictory.

“We were convinced, all of us, that there was contradictory testimony,” Archambault said, recounting a meeting on the issue with three senior prosecutors.

Archambault denied she insisted on issuing the warrant, but said she acted on a police request for one.

But she admitted that aside from the gravity of the crime, there was no other reason to authorize an arrest warrant, as opposed to issuing a simple citation ordering Lafleur to appear in court.

Lafleur’s address was known, he appeared in court as required and there was nothing to suggest he could be dangerous, his lawyer said.

The hockey legend is seeking damages for what he calls financial losses, moral damages and suffering to his family.

He claims his reputation was tarnished by the issuing of a warrant, which led to headlines that read: “Guy Lafleur wanted.”

The suit is also critical of the prosecution for having filed unfounded accusations against him.