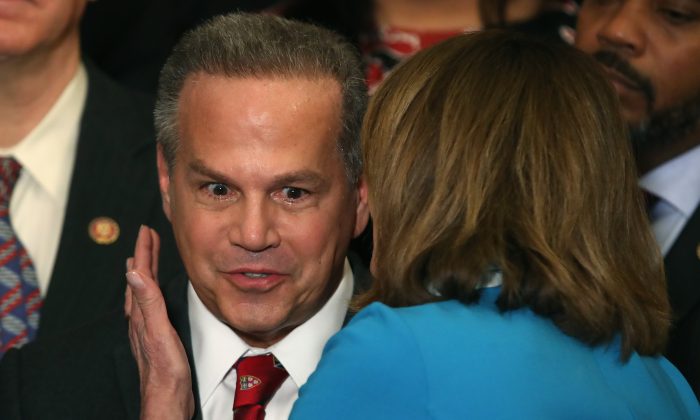 New civil rights legislation introduced in the U.S. House of Representatives that would extend protection to LGBTQ individuals would also undermine First Amendment free speech rights while opening the door to religious-based discrimination, according to conservative critics.

The measure would add “gender identity” and “sexual orientation” to the classes protected against discrimination by the Civil Rights Act of 1964, outlawing discrimination against all protected classes in employment, housing, public accommodations, education, jury service, banking and credit, and retail stores.

“In most states in this country, a gay couple can be married on Saturday, post their wedding photos to Instagram on Sunday, and lose their jobs or get kicked out of their apartments on Monday just because of who they are,” said Cicilline, an openly gay man. “This is wrong. We are reintroducing the Equality Act in order to fix this.”

Cicilline’s comment on the plight of gay couples leaves out what critics say are the adverse effects and unintended consequences of his law.

Rep. Matt Gaetz (R-Fla.) criticized H.R. 5 at a recent congressional hearing on the bill, by highlighting the chaos that could follow legal protection for a person’s self-defined gender identity.

What if, for example, President Donald Trump decided to declare himself the country’s “first female president”? Gaetz wondered aloud, according to The Washington Post. Under the act, referring to Trump as a man—or in politically correct parlance, “misgendering” him—could be unlawful.

“What happens when sex is defined as gender identity, and gender identity is terribly vague?” Gaetz said. “Will all sex-based distinctions be erased? … Would grants for female-led businesses or programs for women in STEM fields suddenly be open to all persons, whether they believe or not that they identify as a woman?”

And as Paul Mirengoff writes at the Powerline blog, state laws similar to the Equality Act have undermined constitutionally protected fundamental freedoms.

Government officials have used them to force people in the wedding industry, such as bakers, photographers, and florists, to render services at same-sex marriage ceremonies, even when the service providers have a religious objection to such marriages.

Even before the 1979 failure of the ratification of the proposed Equal Rights Amendment, which would have enshrined social engineering on the basis of sex in the U.S. Constitution, left-wing activists have been trying to use civil rights laws to impose radical egalitarianism on society.

Tina Trent, a former candidate for District 26 of the Georgia General Assembly, told The Epoch Times that the Equality Act “is an endless lawsuit machine.”

“Unlike traditional federal civil-rights legislation, which at least redresses historical injustice and is bounded by the narrow category of race, this legislation will be applied to anything and everything the [LGBTQ] lobby invents as their next cause,” said Trent, a writer and former academic who holds a doctorate in contemporary political and social movements from Emory University.

“Who would have predicted even three years ago that [LGBTQ] activists would succeed in demanding that we not only accept but submit to their fringe ideas about gender differences being nonexistent? What new rules will they invent that we must bow to?”

The LGBTQ lobby “has been taken over by literal fascists,” she said. “Handing them the power to sue anyone who does not submit to their ever-changing political demands is a recipe for utter disaster.”

“The Equality Act also clarifies that the Religious Freedom Restoration Act (RFRA) cannot be used in civil rights contexts, prohibiting religious liberty—which is a core American value—from being used as a license to discriminate,” the group said in a statement.