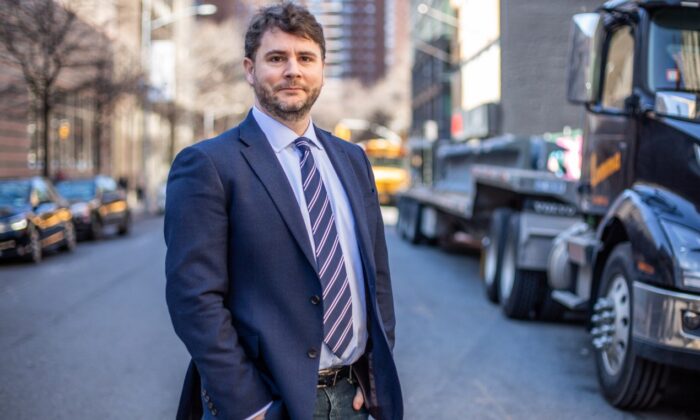 Samantha Flom
Samantha Flom is a freelance political reporter for The Epoch Times. A graduate of Syracuse University, she has a background in journalism and nonprofit communications. Contact her at scflom@gmail.com.
View profile
Follow
biggersmaller
Print

Concerns over the influence of critical race theory on public education have erupted over the past few years, sparking a moral outcry at school board meetings across the country. But the ideology, an expert contends, has been around for much longer than some might think and is being wielded by those in power to achieve a new world order.

“Critical race theory is just one tool—it’s one claw on the dragon,” said James Lindsay, author and founder of New Discourses. “The goal is in fact to install a de facto technocratic government over everything in the world.”

The author of “Race Marxism: The Truth About Critical Race Theory and Praxis,” Lindsay is a leading expert on critical race theory who rejects its premises outright.

According to the NAACP Legal Defense Fund: “Critical Race Theory, or CRT, is an academic and legal framework that denotes that systemic racism is part of American society–from education and housing to employment and healthcare. Critical Race Theory recognizes that racism is more than the result of individual bias and prejudice. It is embedded in laws, policies, and institutions that uphold and reproduce racial inequalities.”

Lindsay, offering his own more critical definition, said, “It’s calling everything you want to control racist until you control it.”

Also a mathematician and self-described “professional troublemaker,” Lindsay holds that the tenets of critical race theory are rooted in Marxism, but that the ideology’s traditional class-based structure was adapted in the latter half of the 20th century to revolve around race and, more broadly, identity.

And that transformation seems to have proven effective as, according to Lindsay, what originated as a fringe concept found only in the dark corners of universities has been working its way into the mainstream for decades.

“They’ve been very intentionally bringing critical race theory into schools at the institutional level since 1995,” he noted. “It didn’t just happen.”

Lindsay’s concerns about critical race theory began around five years ago during what has since been dubbed the “grievance studies affair,” when he and his colleagues started submitting hoax critical theory papers to academic journals for publication to emphasize a perceived erosion of academic standards. One of those papers, he said, applied ideas from critical race theory to education.

“We suggested that we engage the students in experiential reparations and apply a progressive stacking methodology to college classrooms as a pedagogical approach,” he explained. “And so, we wrote this paper that basically amounts to saying we should abuse students—and to make it funny, we said, ‘but compassionately’—to overcome their privilege.”

The peer reviewers, according to Lindsay, responded by discouraging him and his coauthors from using compassion, asserting that it would “recenter the needs of the privileged,” and advocating instead for a focus on “discomfort.”

When it eventually dawned on Lindsay that the peer reviewers were recommending that classrooms reproduce Maoist “struggle sessions” to force students into submission, it shocked him into action.

“I told my wife I wanted to quit my job and study it full-time to fully expose it because nobody was doing it,” he said.

Although one might expect corporate bigwigs and Marxist ideology to be like oil and water, according to Lindsay, the widespread corporate embrace of identity politics can be traced back to the early 2010s.

“Big financial institutions, big NGOs, big foundations with a huge bankroll behind them realized that this tool was really good for disrupting anti-financial protests like Occupy Wall Street,” he contended. “So, they started to bankroll it tremendously. They started to dump a river of money into all of these identity politics disciplines.”

Noting that it was identity politics that ultimately brought down the Occupy Movement from within, he added, “You had these big banks proudly talking about how much diversity they had—[that] they were the good guys—when they were actually funding the insurgency that ended the movement threatening them.”

And it benefited businesses to keep up the charade, Lindsay argued, as it provided them with a convenient “sword and shield” to protect themselves from future social pressure.

“They can hide behind the shield of virtue and say, ‘We’re just promoting diversity; we’re trying to do this helpful thing,’ while they can take out anybody who’s a problem to the company on the inside,” he noted.

Now, years later, corporate training programs surrounding “equity and inclusion,” “white privilege” and other social justice concepts are not only commonplace in the private sector but championed as proof of civic virtue. Notably, according to a global PricewaterhouseCoopers (PwC) survey, 72 percent of North American workers say that diversity is “a stated value or priority area” at their organization.

However, even those who support such programs have begun to sense a lack of sincerity on the part of the organizations implementing them. For instance, a February 2021 report from The Josh Bersin Company found that approximately 80 percent of the companies that claim to prioritize diversity, equity and inclusion are “just going through the motions” and “not holding themselves accountable” to those concepts.

But according to Lindsay, worker appeasement is not the only reason businesses go through those motions. Employers, he said, are being compelled by another factor—an increasing reliance on the environmental, social, and governance (ESG) metrics used by investors to measure a company’s exposure to financial risks associated with those issues.

Those metrics, Lindsay asserted, are being used by major corporate investors to strongarm businesses into accepting and implementing the liberal policies they support, such as “equity” initiatives and other policies rooted in identity politics.

“A very small number of people with a very large amount of other people’s money were able to decide that their ideological vision for the world was going to be imposed, come hell or high water, using corporations as a workaround for the government because the Constitution would have prevented it otherwise,” he contended.

And that vision, Lindsay added, is the eventual installation of a global government by the year 2030.

“This is unambiguous,” he said. “They say so in white paper after white paper, book after book.”

Acknowledging that the average citizen might not be able to do much to prevent that vision from becoming reality, Lindsay noted that certain elected officials have already begun to fight back.

Additionally, according to The Heritage Foundation, 13 states have already enacted laws banning the teaching of critical race theory or related concepts in public schools, with Florida’s “Stop W.O.K.E. Act” prohibiting racially discriminatory policies and practices in the workplace as well.

But turning the tide completely, Lindsay noted, will require a larger effort to expose the agenda behind such divisive policies so that the rest of society will reject them.

“Society’s kind of like a garden,” he said. “You have to tend your garden and keep your garden healthy. You have to fill it with positive institutions and people who have positive values and virtues rather than having that scarred and torn earth where poison ivy will grow.”

Samantha Flom
Follow
Samantha Flom is a freelance political reporter for The Epoch Times. A graduate of Syracuse University, she has a background in journalism and nonprofit communications. Contact her at scflom@gmail.com.