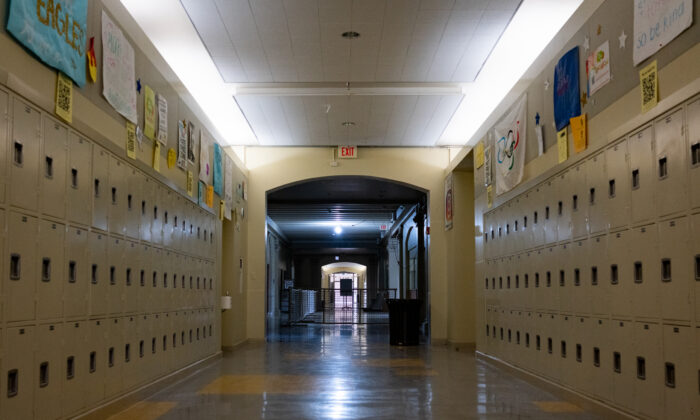 SANTA CLARA, Calif.—Editor and filmmaker Christopher Rufo has been focusing his research on critical race theory (CRT) in K–12 schools for the past four months.

Since California announced its ethnic studies curriculum in March, there has been much discussion of CRT, a quasi-Marxist theory that divides people by race into “oppressors” and “oppressed.”

Those who oppose the ideology, such as Rufo, say it’s divisive and harmful. He said he sees how the theory manifests as a curriculum and a teacher training program, as well as its effects on kids.

“First graders in Cupertino, California … are forced to deconstruct their racial and sexual identities and then rank themselves according to their power and privilege,” Rufo told NTD Television. “I did a story about middle school teachers in Springfield, Missouri, who were forced to locate themselves on an oppression matrix. White, male, Christian, English-speaking teachers were told that they were inherently oppressors, and other teachers were told that they were inherently oppressed.”

He also wrote a piece about teachers in Philadelphia asking fifth-graders to celebrate “black communism” and simulate an “Angela Davis Black Power” rally. He believes these examples of CRT in schools illustrate “just how nonsensical, how divisive, how destructive, and how truly manipulative it can be, especially when applied to very young children.”

Rufo said he has seen the theory expand outside schools. He pointed out that Portland, Oregon, was one of the first cities to adopt the concept, and he suggested this is partially responsible for the unrest last year.

“We’ve seen it as more than 150 days straight of rioting last year after the death of George Floyd—including the group called the Northwest Youth Liberation Front—comprised and led by teenagers—who perhaps, in some cases, absorbed some of the ideology in school,” he said.

He’s concerned that over time, this form of instruction will lead to a deformed education system.

On March 18, the California State Board of Education approved the implementation of the Ethnic Studies Model Curriculum in schools, after four revisions in four years. It’s the first in the nation to make the curriculum available to educators.

“Today’s historic action gives schools the opportunity to uplift the histories and voices of marginalized communities in ways that help our state and nation achieve racial justice and create lasting change,” Tony Thurmond, state superintendent of public instruction, stated in an announcement.

According to the announcement, ethnic studies courses can help minority students increase graduation and college admission rates. The curriculum won’t be mandatory.

After the announcement, Lee Ohanian, a senior fellow at the Hoover Institution, wrote a piece, titled “California’s education department chooses critical race theory over 100,000 objections,” pointing out flaws in the curriculum.

“The curriculum continues to be founded on critical race theory, which is the view that our legal, economic, and social institutions are inherently racist and are exploited by some Whites to retain their dominance by oppressing and marginalizing others. The CRT-focused curriculum will foster divisions among students and will almost certainly not improve learning outcomes, as advertised by its proponents,” Ohanian wrote.

Ohanian stated that students should be taught about the world and American history in an honest, open approach, allowing them to understand the past and do better in the future.

“They’re racially discriminatory, they promote race essentialism, they promote collective guilt based on skin color and other inborn attributes. And they also promote neo-segregation, separating students, teachers, and employees on the basis of race, all of which are illegal under existing law,” he said.

They already have filed three lawsuits and are planning to file more this summer.