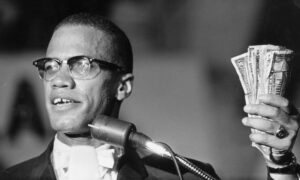 GOSHEN, New York—Dairy farms have been declining in Orange County, but Goshen’s 5 Spoke Creamery is staging a comeback. Owner and CEO Alan Glustoff is re-purposing a former working dairy farm into an operation that makes artisan cheeses for restaurants and stores in New York City.

He’s doing it in a way that protects the environment and provides a sustainable lifestyle for his family. Glustoff admits right now it’s a work of love and not a road to riches. He raises 35 cows on a 75-acre spread, small by any standard. Economies of scale work against him, and he faces burdensome regulations at every level.

Consumer tastes are trending toward fresh, locally-grown food products. Yet, most food for American tables comes from large farm corporations that ship their products over long distances.

Orange County farmers have an opportunity to serve locally-produced food to their big city neighbors and beyond. Glustoff’s creamery in Orange County is less than 100 miles from the Big Apple and is positioned to provide some home-grown specialty cheese to city dwellers.

“Some large coastal cities, like New York City, have limited local food capacity—farmland within 50 miles can only support about 10 percent of its population. But if the limits were expanded to 100 miles, New York’s surrounding farmland capacity grows to about 30 percent,” the Epoch Times previously reported.

5 Spoke wants to set itself above the crowd. “We make raw milk cheese, which is healthier,” Glustoff said. His latest, a Porter cheese, has a semisoft texture, somewhat nutty, with an earthy undertone.

Glustoff said 5 Spoke’s cheeses have the flavor of the raw milk his farm produces and drew a sharp contrast with the taste—or lack of taste—of the cheeses produced by large, corporate farms.

Head cheesemaker Evan Veltahouse has big hopes for the cheeses he makes. “I’m responsible for producing a high-quality, safe product that someday people all over the world can enjoy.”

There are for almost any cheese: milk, salt, bacteria, and enzymes. The different cheeses come from varying the temperature, and the amount of time it cures.

Glostoff said it like baking a cake: an underbaked chocolate cake could turn into brownies while baking longer could make a moist devils food.

There are healthful benefits to fresh, home-grown dairy products. Glustoff notes that his cows are grass-fed, and the milk is free of pesticides and hormones.

According to Prevention magazine, grass-fed dairy products contain a greater diversity of nutrients, including vitamins, minerals, phytonutrients, and antioxidants.

Glustoff said his cheese is a value-added dairy product. “We are not just making a cheese. These are hand-crafted raw milk cheeses that we hope to sell to the top-tier white tablecloth restaurants and specialty stores, and the independent specialty markets in the city.”

New York state is among the top five cheese producers in the country. Sales of milk and other dairy products from cows in New York State totaled $2.3 billion in 2007. Farmers are among the largest landowners in New York State, but not necessarily the wealthiest.

5 Spoke Creamery is bucking this trend with a model that is sustainable.

For this family-owned business, sustainability means “you have to sell the product,” Glustoff said. That means marketing in all sorts of ways: “there is social media; there’s print media; it’s food shows; it’s distributors.”

Like family farms of a bygone era, the whole family helps. “Like it or not, everybody has to be a part of this. My kids are in their 20s. Fortunately, I have the support of my wife Barbara. Without her blessing we would not have bought this.”

Glustoff hooks into many groups that promote a sustainable lifestyle. He has a passion for bicycling and supports races. He allows a multi-purpose room to be used for environmental groups. He gives presentations to school groups to teach them “about where their food comes from and why not to take it for granted that food will always be there.”

Actor Mark Ruffalo, who has an organization called Solutions, has asked Glustoff to talk about sustainability in his operation.

The aging room has a “coolbot” that brings the temperature down without equipment that pollutes the air.

Rural America and the agricultural economy in general are greatly affected by a strong dairy business, according to the website dairyfarmingtoday. When a dairy farm spends money locally, it creates a multiplier effect.

The U.S. dairy industry is estimated at $140 billion in economic output, $29 billion in household earnings, and more than 900,000 jobs (based on economic analysis of direct and indirect economic impact of U.S. dairy from farm through processing).

“Scientists based at the University of Wisconsin–Madison have started a slew of studies to determine how dairy farms can reduce their greenhouse gas emissions,” Epoch Times previously reported.

The studies may help farmers reduce their impact on climate change. The studies also will support a dairy industry effort to make farms more environmentally friendly, profitable, and attractive to consumers.

The Innovation Center for U.S. Dairy is developing a computer program that will allow farmers to compare water consumption, energy use, and greenhouse gas emissions from their farms to the national average and learn how improving their practices could help their bottom line.

5 Spoke recycles every part of its operations. “The cows graze on our land, so the land again is nourished by manure. We sell the whey, a byproduct of the cheese, to a neighbor that uses it for his pig farm.”

The aging room is placed in the basement of the creamery to mimic a real cave. Normally, the room stays at the right temperature.

But if needed, instead of traditional air-conditioning that uses a compressor, the room has a “coolbot” that brings the temperature down without equipment that pollutes the air. “It’s a relatively simple system.” They also use an air exchanger.

Agri-tourism also plays a part in the creamery’s business model. People can buy fresh products and get a taste of farm life. Glustoff has plans to renovate a small dance hall on the property into a café.

Family farms face similar tests around the country: economies of scale and burdensome regulation. “That’s the challenge: to make a farm and a cheese business of this size work,” said Glustoff.

The creamery is governed by New York’s agriculture department, which inspects his operation. In addition to that, he says the FDA can make other rules. If he wants to sell to food store chains, there is a third party audit that Glustoff says is tougher than other regulations.

There is also the “old-fashioned” challenge of the weather—having enough rain to grow enough grass for his cows.

Large farms have greater access to financing and benefit from government subsidies and help when drought or disease hits the agricultural sector.

Statistics show that operations like Glustoff’s that connect directly to the consumer are making progress. The Orange County, NY Agricultural and Farmland Protection Plan reported in February, 2015: “While livestock and dairy farms continue to decline, farms with direct-to-consumer sales have increased dramatically and earned $7.6 million in 2012.”

The county has made preserving agriculture a priority for several reasons: jobs, fresh local produce, a scenic landscape for tourist activities, and land for wildlife.

Glustoff studied cheesemaking in Holland and some of the lifestyle of that country rubbed off. “It’s ok to drink whole milk as long as your life is balanced in doing things like bicycle riding, which is more typical, say, in Holland.”

Glustoff said “just making the cheese and having it turn out” makes him happy. “It is satisfying when people do recognize it and do buy it. We have a good following—people seem to like us.”