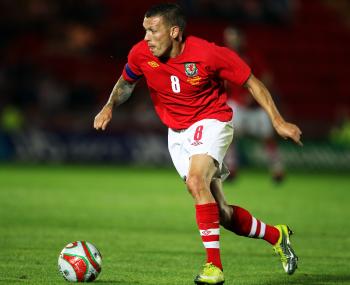 Craig Bellamy in action during the International Friendly between Wales and Luxembourg at on August 11, 2010 in Llanelli, Wales. (Bryn Lennon/Getty Images)
Soccer

Craig Bellamy Back Home to Cardiff

Bellamy, now 31, said he was delighted to be joining his hometown club, even though it has meant moving down to the Championship. Cardiff is among those clubs with realistic aspirations of achieving promotion to the Premier League. The loan deal will make Bellamy the highest paid player in the second tier of English football.

Manchester City will continue to pay over 75 percent of Bellamy’s weekly wage but there is some doubt as to whether cash strapped Cardiff can even afford the remaining portion of US$31,000 a week. Football League Chairman Steve Clarke is reported to be seeking a meeting with the Welsh club to verify that they can indeed afford to pay that amount for an entire season. Assuming the club can convince the League that they are able to meet their financial obligation, then the green light will be given for the move to go ahead.

It is no secret Bellamy was unhappy at Manchester City following the departure of the manager that signed him, his friend, mentor and fellow Welshman Mark Hughes. Notwithstanding his poor relationship with Hughes’ replacement Roberto Mancini, Bellamy did manage to put in several sparkling performances for Manchester City last season.

Not the least of these was in the Premier League local derby at Old Trafford where Bellamy looked the best player on a field bursting with high profile internationals from around the world.

The writing looked to be on the wall for the much travelled striker last week when Mancini left him out of City’s 25 man Europa League squad, and the squad for the opening league fixture at Tottenham.

Then the arrival of yet another big money striker this week, in the shape of Mario Balotelli from Inter Milan, really signaled the end of the line for Bellamy as a first team player at Eastlands.

Craig Bellamy may be moving into the evening of his career, but if he can keep that temper under control he will be a major handful for any defence in the Championship. Cardiff manager Dave Jones looks to have secured a real trump card in this seasons fight for promotion to England’s elite.

Mr Jones told the BBC, "Bringing Craig to Cardiff is another big step in the development of this football club and I am delighted that he has agreed to join us on a season-long loan.

"Like recent additions Jason Koumas and Seyi Olofinjana, Craig is a great talent and adds to the quality players that we have here.

"We will continue to work on taking the next steps as a club and hope that all Cardiff City supporters join us in welcoming Craig by turning up in high numbers this season."