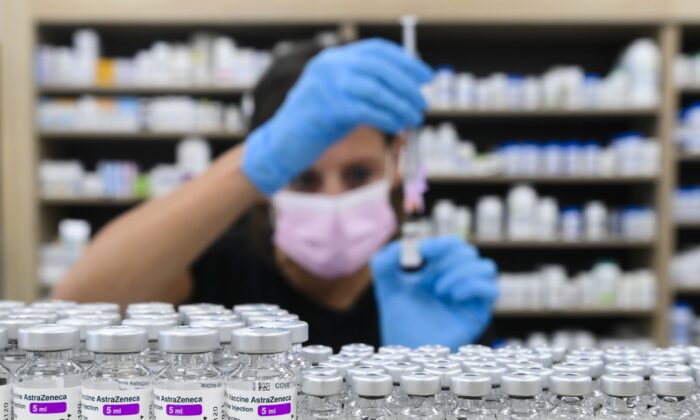 A pharmacist prepares a dose behind a counter lined with vials of COVID-19 vaccines, in Toronto on June 18, 2021. (The Canadian Press/Nathan Denette)
By Lee Harding

Ross Wightman, who was diagnosed with Guillain-Barré syndrome shortly after receiving a dose of the AstraZeneca COVID-19 vaccine, has become one of the first recipients of funds under Canada’s Vaccine Injury Support Program.

But the plight of others who have suffered vaccine injuries weighs heavily on the realtor and former pilot from B.C.’s Okanagan Valley.

Wrightman says he’s “feeling fired up” about the inaction of government and the medical system in recognizing those who have suffered vaccine injuries.

“The longer this goes on the more angry, and completely disheartened I get by the lack of recognition from government officials and doctors that these things are actually happening,” he wrote in a May 31 Facebook post.

“It’s not a coincidence. … There’s one common denominator.”

Wightman was diagnosed with Guillain-Barré Syndrome (GBS) days after receiving his only dose of the Oxford-AstraZeneca COVID-19 vaccine in April 2021. On May 17, 2021, he woke up in the Kelowna General Hospital paralyzed. He couldn’t walk again without assistance for seven months.

Wightman received a letter from the Vaccine Injury Support Program on May 20 of this year saying he was approved for compensation.

“First and foremost, we would like to offer you our deepest sympathies for your ongoing health struggles. We wish you the strength and support to sustain you during this difficult time,” the letter said. “Following an assessment of your case, there is a probable causal association between the injury(ies) sustained and the vaccination.”

Wightman has not disclosed his payout, except to say it is short of the maximum amount of $284,000, according to CBC News. He told CBC he is also eligible for income replacement of up to $90,000 per year, though that is less than what he was used to.

In his Facebook post, Wightman said the letter represented “long awaited recognition from the government he wasn’t sure would come.”

“We were very sceptical as to where this process would go early on, as the service we were getting was appalling. That being said, I have to give credit where credit is due, and our current case manager and project lead has been excellent,” he wrote.

Wightman flew to Vancouver to see a neurologist on May 31. He has been very public with his recovery journey, but has received more media coverage since his payout. He says he hears new vaccine injury stories every time his own experience gets covered.

“Every time one of these goes live I receive phone calls, text messages and DMS from people across the country sharing their vaccine injury stories with me,” he wrote. “How come doctors aren’t putting their hands up and waving the flag? It’s OK to be wrong, but it’s not OK to do nothing about it when these things are occurring.”

In January, the BC Centre for Disease Control acknowledged 10 people in the province had been hospitalized with GBS following vaccination for COVID-19. Four had received AstraZeneca, five Pfizer-BioNTech Comirnaty, and one had received Modern Spikevax.

Wightman, however, believes the problem is much worse.

“It’s not normal to be having healthy young people like myself and others in the Okanagan showing up in the emergency room (in a 6-week period) with rare neurological conditions,” he wrote, urging people to do due diligence around COVID vaccines.

“Just like everything in life, make informed decisions and ask questions. The information is out there you just have to dig a little bit unfortunately. Keep on fighting people, and find your wings.”

In April, Health Canada said the 1.5 million doses of AstraZeneca vaccine that Canada received from the Emergent Biosolutions plant in Baltimore, Maryland—which had experienced a contamination event due to quality-control issues—were safe.

However, the U.S. Food and Drug Administration released a report saying staff at the plant were not adequately trained, nor was equipment cleaned at frequent enough intervals to “prevent contamination that would alter the safety, identity, strength, quality or purity of the drug substance.”

The plant was shut down and the FDA said what had been produced would not be distributed in the United States.

The Vaccine Injury Support Program was introduced in December.