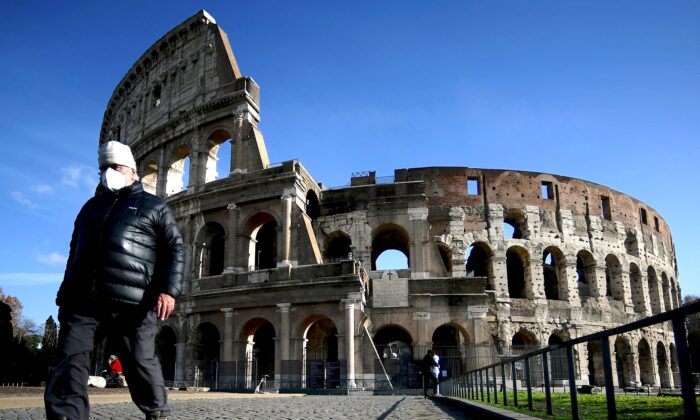 A face masked man walks by the ancient Colosseum in downtown Rome on Dec. 5, 2020. (Filippo Monteforte/AFP via Getty Images)
Viewpoints

We all love Italy, right?

That country was always my favorite place to visit, when I had the time and the money—great food and wine, fantastic art, “la dolce vita.” I would describe it as “Disneyland for Adults” to those who hadn’t been there.

That was then. This is now.

“The news from Italy has started to sound like good incipits for a dystopian fantasy novel or like a déjà vu recalling the Soviet Union. A couple of weeks ago, a new decree of the [Prime Minister Mario] Draghi government established yet more rules restricting the lives of people who have not been injected with the latest vaccine booster and who therefore cannot show the latest version of the Green Pass. These second-class citizens, who have already been stripped of their right to move, work, and participate in a great number of social activities, are now forbidden from entering post offices to withdraw their pension, and they are to be allowed access to supermarkets only to buy “goods of primary necessity.”

Do you wonder what “goods of primary necessity” are? So did I. And we thought the dwindling shelves in our supermarkets were bad.

According to The Wall Street Journal, “The unvaccinated are barred from cafes, restaurants, movie theaters, hotels, trade fairs, gyms and just about all other enclosed spaces open to the public. Domestic flights, ferries, trains, and local public transportation are also off limits, as are ski lifts.”

The Journal also reports on a woman in Liguria who, unable to enter her usual local restaurants, “sometimes gets a takeout sandwich and eats it on the beach—the only place she feels welcome. On a recent morning, she brought hot tea and cookies from home and sat on the beach watching the sea from what she calls her ‘freedom tea room.’”

Not long before I read Salonia’s and the Journal’s pieces (that morning actually), I heard much the same in an email from Italy from Renato Cristin, a philosophy professor at the University of Trieste. The professor, with whom I occasionally correspond and who was writing to respond to my piece—How My View of the Holocaust Was Altered During COVID—is, with Vladimir Bukovsky, one of the international leaders in a movement for Nuremberg-like trials for communism. (Great idea, no?)

That such a person is subject to the same draconian—or what someone must already have called “Draghi-onian”—measures is a (excuse the expression) red flag underscoring what that country is going through.

What is it then about Italy that has brought it to such a pass?

Obviously, I have nowhere near the knowledge of Crispin and Salonia, but I think it’s interesting that the restrictions often are strongest in countries with historical links to fascism, not only Italy but also Austria.

I am reminded of Bernardo Bertolucci’s 1970 film “The Conformist,” based on the novel by Alberto Moravia, which linked conformism with fascism. Among other things, Moravia was trying to explain Mussolini.

Across the globe today, we see an extraordinary growth in conformism. It’s quite ominous, more ominous than COVID itself, although COVID clearly drove it.

It’s why I wrote my article analogizing—in an as-yet small way—the Holocaust with what we are going through today. These are complicated and increasingly dangerous times. The beguiling, mysterious Italy we saw in the films of Federico Fellini is no longer with us.

For now, the best we can do is listen to Dino sing ”Arrivederci Roma.” It didn’t always sound quite this sad. After all, arrivederci means, roughly, “until we meet again.” Let’s hope.