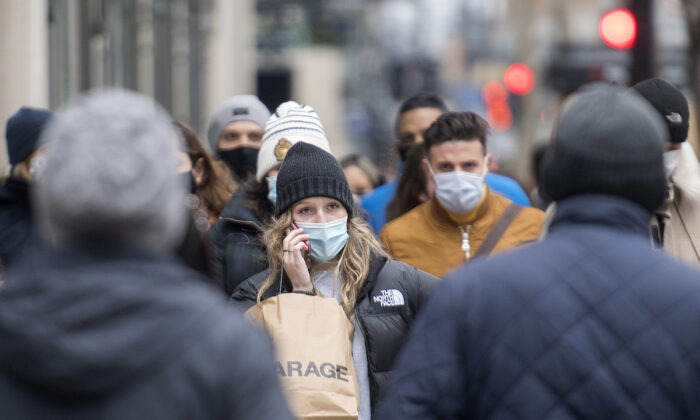 People wear face masks as they walk along a street in Montreal, on Dec. 5, 2020, amid the COVID-19 pandemic. (The Canadian Press/Graham Hughes)
Canada

COVID Measures Should Have Been Targeted, Says Laval University Immunology Prof Whose Article Was Abruptly Pulled

A professor of infectious diseases and immunology is questioning Quebec’s COVID-19 pandemic management with an analysis of provincial data, saying risks were overstated and measures uncalled for.

“The threat from COVID-19 was very real, but was it as significant as reported?” said Patrick Provost in the piece published in Québecor media company platforms on June 22.

Provost is a full professor at the Department of Microbiology and Immunology at Laval University, with his current research focusing on Ribonucleic Acid (RNA).

He noted that the mortality rate is 1.44 percent for COVID-19, but he said the rate is overestimated due to the inclusion of deaths “with COVID” and the underreporting of cases.

The professor said there was no excess mortality in the province since the beginning of the pandemic, except for people over 70 years old and mostly after the first wave (April-June 2020) and shortly after the holiday lockdowns and curfews that coincided with the vaccine booster campaign (January 2022).

Provost reported that over 90 percent of deceased individuals over 70 years old, who died with or from COVID, had two or more pre-existing medical conditions, and 69.2 percent were over 80.

As for younger folks, he pointed to data showing that five individuals or fewer under the age of 40 (with one or no preexisting medical condition) died with or from COVID.

Based on this data, Provost asked if restrictions such as vaccine passports and vaccine mandates were justified.

For example, was it justified to “impose such severe and wide-ranging health measures instead of targeted ones, to contain the threat for a well-defined category of individuals?” he said.

Or was it justified to “muzzle the professionals and academics who criticized the health measures, by way of pressures from their professional orders or institutions, under threat of losing their license to practice or their employment?”

Provost called for a review of pandemic management, which he says revealed the “limits, the flaws even, of our system and democratic life.”

Provost’s article was taken down by Québecor one day after its publication.

“Even though we’re in favour of debating ideas, we’ve decided to remove this letter from our websites,” wrote Journal de Québec editor-in-chief Sébastien Ménard in a tweet on June 23. Journal de Québec belongs to Québecor.

“After checking, some of the elements it contained were inaccurate or could mislead the public, and we can’t subscribe to that.”

Provost provided The Epoch Times with a copy of Ménard’s email in response to the professor’s inquiry as to why his article was pulled.

The email does not point out the “inaccuracies” and Ménard said he would not discuss the issue further.

Provost said the removal of the article is “censorship.”

“Why has what I’ve presented not been covered by mass media for the past 27 months?” he said in a June 24 email to The Epoch Times.

The Epoch Times reached out to Ménard for comment but didn’t hear back by publication time.

Provost’s article can still be accessed via the Internet Archive. It was also republished by independent media company Libre Média.

The removal of the letter after its publication is not the first blow to the professor, who is currently serving an eight-week suspension without pay from Laval University for saying there are risks associated with COVID-19 vaccination of children.

The mid-June suspension was a result of public comments he made back in December in which he said the risks of vaccinating children outweigh the benefits.

“Not only are there risks of myocarditis [heart inflammation] and other side effects, but there’s no real benefit to vaccinate children because they are not inclined to develop complications from COVID,” Provost told The Epoch Times.

The professor says Laval University is accusing him of having only presented one side of the issue. Provost counters that he could make the same argument against the government and some media, who have maintained the position that vaccines are “safe and effective” despite evidence of risks.

Provost says his union is supporting him to remove the suspension, adding it has filed a grievance and an arbitrator will weigh-in in the fall.

“I’m dismayed by all that’s happening, that I would be suspended for exercising my academic freedom, that my paper that was accepted and published, after having been approved by two people from the Journal de Montréal, would be pulled without a valid explanation… I’m dismayed and extremely worried about the state of democracy in Quebec.”