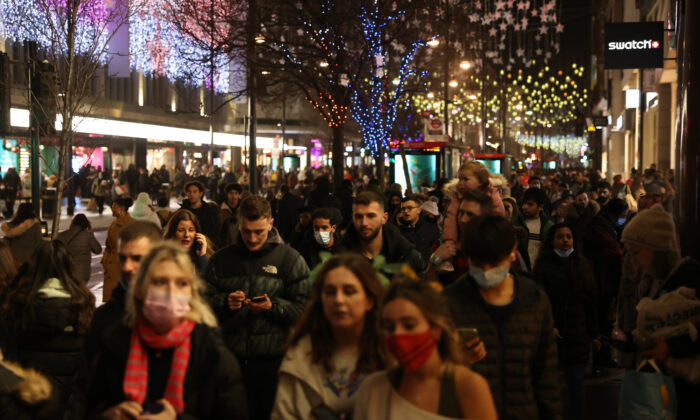 COVID-19 Will Become ‘Just Another Cause of Common Cold’: UK Professor

COVID-19 will become “just another cause of the common cold” and people who test positive will have to be allowed to go about their normal lives as they would do with any other cold, a British medical professor has said.

Paul Hunter, professor in medicine at the University of East Anglia, told BBC Breakfast on Dec. 28: “COVID is only one virus of a family of coronaviruses, and the other coronaviruses throw off new variants typically every year or so, and that’s almost certainly what’s going to happen with COVID—it will become effectively just another cause of the common cold.”

Hunter said that, at some point, the daily reporting of COVID-19 case numbers will no longer be warranted.

“We’re not going to be doing daily reporting on cases of the different causes of the common cold going forward, of which COVID is one,” he said, adding that restrictions could be scaled back once the Omicron variant has been dealt with, possibly after Easter.

Hunter said: “We’re going to have to let people who are positive go about their normal lives as they would do with any other cold.

He said the self-isolation rules will have to be relaxed at some point, because “this is a disease that’s not going away.”

UK Health Secretary Sajid Javid confirmed on Dec. 27 that no further CCP (Chinese Communist Party) virus restrictions will be introduced in England, at least before the new year.

Environment Secretary George Eustice said on Dec. 28 that, though infection rates from the new Omicron variant are rising, there was evidence it was not resulting in the same level of hospital admissions as previous waves.

“There is early encouragement from what we know in South Africa that you have fewer hospitalisations and that the number of days that they stay in hospital if they do go into hospital is also lower than in previous variants,” he told the BBC Radio 4 Today programme.

“At the moment we don’t think that the evidence supports any more interventions beyond what we have done,” he said, adding that the government keeps it “under very close review.”

“The horrific scenes that we saw a year ago—intensive care units being full, lots of people dying prematurely—that is now history in my view and I think we should be reassured that that’s likely [not] to continue,” he said.