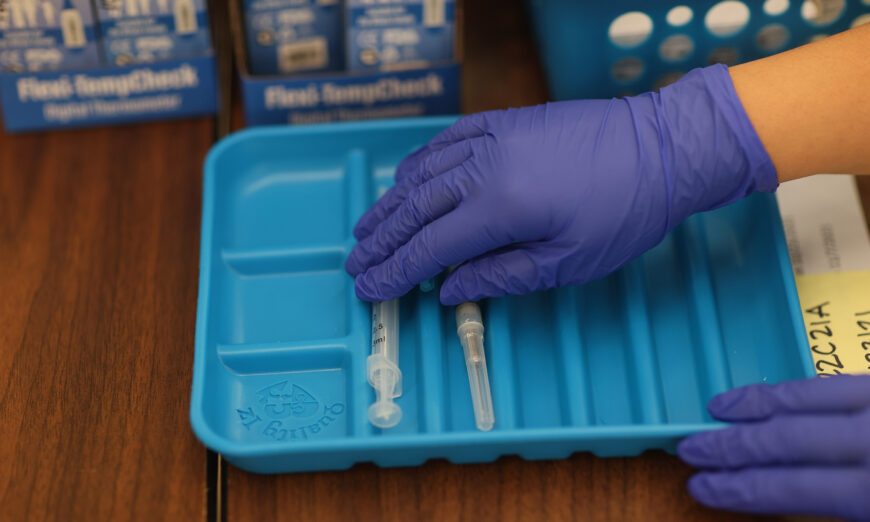 A health care worker prepares Moderna COVID-19 vaccines at a clinic in Florida on May 20, 2021. (Joe Raedle/Getty Images)

COVID-19 vaccine effectiveness for all age groups has been much worse against the Omicron virus variants than earlier strains, particularly the currently dominant subvariants, according to U.S. Centers for Disease Control and Prevention (CDC) data presented on Sept. 1.

The data, much of which hasn’t been previously published, show that the protection against both symptomatic infection and severe disease isn’t as strong against Omicron, which emerged in December 2021, and its subvariants.

Data from the CDC’s Increasing Community Access to Testing, a no-cost testing program, showed that vaccine effectiveness for a booster compared to a primary series against symptomatic infection waned rapidly across all age groups, going under 50 percent within two months and turning negative around six months.

A fourth dose, or second booster, upped the protection, but the shielding quickly dropped to less than 40 percent, according to estimates for those 50 and older.

Estimates drawn from the CDC’s VISION Network showed that emergency department and urgent care visits rose over time for the vaccinated, with adjusted vaccine effectiveness estimates for 5- to 11-year-olds dropping to 18 percent 150 days or more after the second shot from just 51 percent 14 to 59 days after a primary series.

For 12- to 15-year-olds, effectiveness went from 60 percent to just 14 percent over the same time period since vaccination.

Data from another system, Cosmos, estimated vaccine effectiveness against emergency department and urgent care visits among 5- to 11-year-olds at 48 percent after a second dose, with the protection dropping to 11 percent but rising to 52 percent with a booster.

Children aged 12 to 15 had better protection at first, 65 percent, but the shielding went down to 21 percent after 120 or more days. A booster restored some of the protection, but 120 or more days after the booster, protection was down to 18 percent.

Data drawn from those months indicate the vaccine-bestowed protection was worse during that time.

Adults designated as immunocompetent—a population reached by excluding immunocompromised—had just 44 percent protection against emergency department and urgent care visits during the period when BA.4 and BA.5 were dominant, according to the data from VISION. That time period started in mid-June.

The protection dropped to 26 percent after 150 or more days.

A booster shot increased the shielding to 59 percent but the protection waned to 33 percent after 120 or more days. Estimates for a second booster weren’t conclusive because of limited follow-up, according to Link-Gelles.

Protection against hospitalization also went down during the BA.4/Ba.5 period, according to data from VISION. Immunocompetent adults had just 25 percent protection against hospitalization 150 or more days after a second dose, and a booster only increased that to 49 percent. Moreover, those who received a booster 120 or more days earlier had just 34 percent protection.

A fourth dose increased protection to 60 percent and that protection waned more slowly, according to preliminary estimates.

Other data from the CDC’s Influenza Vaccine Effectiveness in the Critically Ill network, pegged vaccine effectiveness against hospitalization among immunocompetent adults at 62 percent from a primary series, but just 33 percent after 150 or more days.

A booster increased protection to 77 percent, but that eroded to 36 percent after 120 or more days.

A fourth dose moved protection to 62 percent 7 to 120 days after the second booster for adults 50 and older.

Estimates for immunocompromised adults were only available for three doses, or a primary series and a booster. They estimated the effectiveness at 66 percent after a third shot. The shielding was down to 37 percent after over 120 days.

Updated boosters were authorized by the U.S. Food and Drug Administration this week. Regulators said the boosters, which target BA.4 and BA.5, will replace the boosters that had been in circulation since 2021.