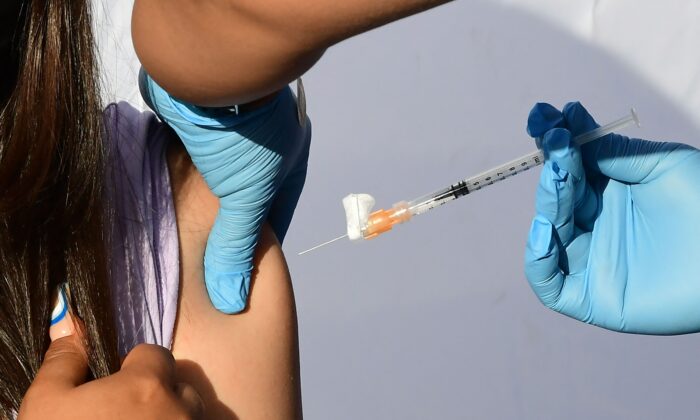 The effectiveness of Pfizer’s COVID-19 vaccine against infection turned negative over time for children aged 5 to 11, according to a new study.

Researchers cautioned against reading too much into the estimates because of potential confounding factors.

“Our study showed a decline over time of vaccine effectiveness against omicron infection in children. However, not many children had been vaccinated for more than 5 months, so there was great uncertainty in the estimate of vaccine effectiveness after 5 months,” Dan-Yu Lin, a professor of biostatistics at the University of North Carolina, told The Epoch Times via email. “Thus, one should focus on the trend of waning effectiveness rather than the estimate at the end.”

Researchers said in the study, which was published by the New England Journal of Medicine, that the effectiveness estimates may have been confounded by earlier infection and vaccination in children more at-risk from COVID-19 due to underlying serious health problems. That could have led to the vaccine’s effectiveness being underestimated.

The group analyzed data from the North Carolina COVID-19 Surveillance System and the COVID-19 Vaccine Management System, with records on 887,193 children aged 5 to 11 available. That included data on vaccination from Nov. 1, 2021, to June 3, 2022, and data on clinical outcomes such as a positive COVID-19 test from March 11, 2020, to June 3, 2022. The group employed a Cox regression model to estimate the vaccine effectiveness.

The research was funded in part by a National Institutes of Health grant.

In addition to studying vaccine effectiveness, the researchers wanted to see what kind of protection previous infection, or natural immunity, provided against the Omicron variant of the COVID-19 virus.

Omicron became dominant in the United States in late 2021 and one of its subvariants is the currently dominant strain.

Natural immunity did appear to do better against hospitalization. After starting at 99.5 percent in the first month, the protection was still high, at 86.9 percent, after 10 months, according to the estimates. The effectiveness of Pfizer’s vaccine, known as BNT162b2, against hospitalization peaked at 88.2 percent at four weeks after dose one and was down to 76.1 percent at week 20.

The uncertainties surrounding the estimates of protection against hospitalization in both groups were greater because of the small number of hospitalizations, researchers said.