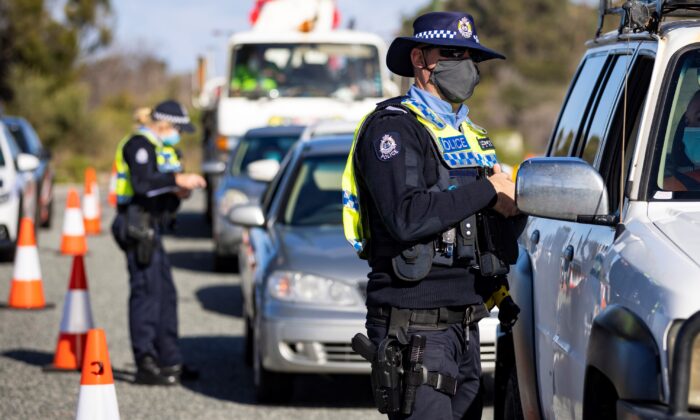 The Western Australian Labor government looks set to pass an impending law for the “ongoing management” of COVID-19 that grants law enforcement extensive powers, including the authority to “break into and enter any place or vehicle.”

A debate has been ongoing since the end of September 2022, with opposition MPs refusing to back the Emergency Management Amendment (Temporary COVID-19 Provisions) Bill 2022.

Under a COVID-19 declaration, the Bill (pdf) authorises “COVID-19 officers” to “break into and enter” any place or vehicle and exercise these powers without a warrant or consent from the owner.

Officers can also take control or make use of any place or vehicle to enforce a health order.

Section 77N also gives officers the power to force individuals to undergo quarantine and “submit to infection prevention and control procedures.” While Section 77O can be used to compel owners of businesses, places of worship, and entertainment venues to close for a specified period.

Labor MP David Templeman, the leader of the house, said the state had been operating under three-month orders stemming from the Emergency Management Act and the new proposal was supposed to allow for a “temporary fit-for-purpose legal framework” to manage COVID-19.

“The reason it is important for the bill to be dealt with as quickly as possible is that it will allow COVID-19 to be managed outside of a state of emergency, with these arrangements to expire after two years,” he told Parliament on Sept. 21, 2022.

One of the key complaints from the Liberal-National opposition has been the rushed introduction of the Bill, as well as questions about its necessity.

In response, Rita Saffioti, the minister for transport, said opposition MPs had time to conduct “full-on interviews” with the media while claiming they did not have time to review the Bill.

“The opposition should concentrate on what it needs to do to get across the legislation and be ready for the debate,” she said.

“To say that the opposition should not alert the public through the media about the government’s disgraceful behaviour or the content of this Bill again goes against all the democratic principles of this place.”

His colleague Shane Love, of the Nationals Party, said the Bill was introduced under a “flimsy pretext” while saying Western Australia was out of step with other Australian states which have been winding down their pandemic management powers.

“Those states have made dramatically different decisions from this government about these measures and the way they have gone about moving to the next phase,” he said. “I hope that the government does not jump up and make some cheap shot and say, ‘See how they manage everything else.'”

He said the Labor government needed to offer more transparency around the Bill and allow West Australians to “return to normal life as much as possible.”

The Mark McGowan government enforced some of the toughest domestic border closures in Australia during the pandemic years in an effort to keep COVID-19 at bay.

“I am not confident that this measure will drop away in two years,” Love continued. “Other states have taken steps that will have measures that they can call on if required going forward, but they have been quite explicit about that.”

“I think it is disingenuous to say that this will drop off in two years.”

The Labor Party controls a healthy majority in both houses of the West Australian Parliament.