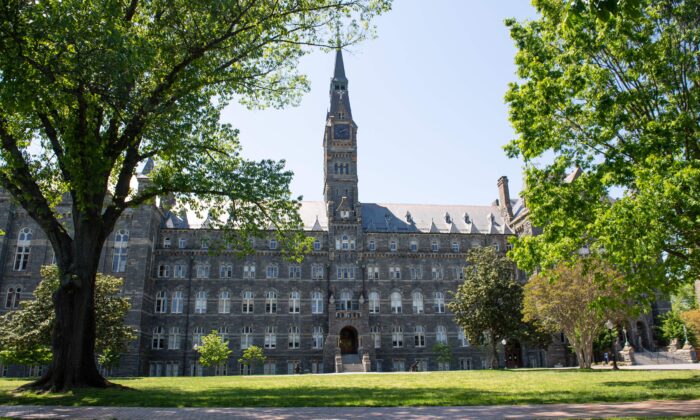 The campus of Georgetown University in Washington on May 7, 2020 is seen nearly empty as classes were canceled amid the coronavirus pandemic. (Saul loeb/AFP via Getty Images)
AMERICA

Three U.S. universities have announced that they will temporarily reinstate a mask mandate on their campuses, citing increasing COVID-19 cases among students.

At Georgetown University in Washington, an indoor mask requirement that began on April 7 is applicable on the main and medical center campuses. The decision was taken after undergraduate students exhibited higher rates of infection. The rules apply in all circumstances except when students are at a private office or personal residence or are eating and drinking.

“This increase is partly due to the impact of the BA.2 Omicron subvariant. BA.2 is now the dominant strain in the United States, including in D.C. and on our campuses. While recent studies show that BA.2 does not cause more severe illness than the initial Omicron variant, they also show that BA.2 is even more transmissible,” the university said in a notice.

Johns Hopkins University, in Baltimore, issued a similar announcement on April 6, “temporarily reinstating” masks for all people in common areas of residence halls and at the university’s dining facilities, except while eating and drinking. Students will have to wear masks inside classrooms as well. The university offers free masks.

In an update on April 7, Rice University in Houston insists that everyone in a classroom wear masks “regardless of their vaccination status.” The only exception is for teachers while lecturing.

The university has seen a “significant rise” in COVID-19 positive cases during the past few days. Around 145 incidents have been reported, with more than 90 percent seen among undergraduates.

The compulsory use of masks has been a controversial issue, as some argue the measure has unintended negative consequences. During a disciplinary hearing in September against a chiropractor who treated patients without wearing a mask, the Alberta College and Association of Chiropractors (ACAC) heard testimony written by a respirologist who said that unless the mask is sealed airtight, the virus is “just going to seep around the masks.”

The respirologist brought attention to a study from Denmark that looked at individuals who wore masks and those who didn’t. “Despite desperately wanting to find objective evidence that masks [work], they could not,” the respirologist said.

“Having the public wear masks, most of which are often wet, dirty, reused, and incorrectly worn, can lead to health problems and inhaling pollutants and secretions over and over.”