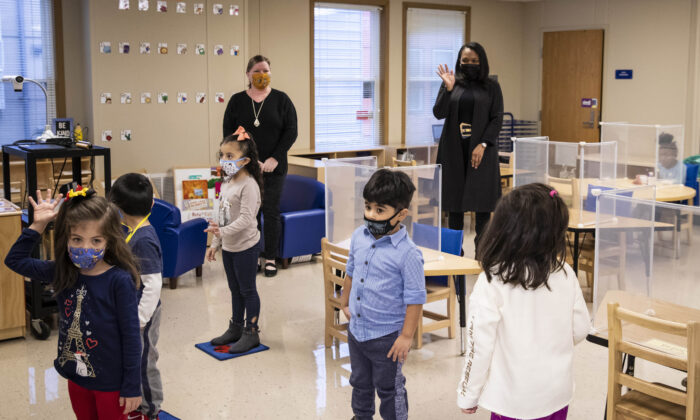 COVID-19 restrictions have damaged children developmentally in ways that might be irreparable, teachers say.

Children who are denied social interaction don’t grow mentally in the same way, experts say. When governments halted in-person schooling for months, restricted activities such as play dates, and ordered families to stay home, children were plunged into painful isolation.

Now, teachers across America say the lockdown generation lags those who were raised in normal years. Older children have fewer friends and slower minds, while some of the youngest don’t feel the urge to make friends at all.

“One of the biggest differences is the number of kids who have no language,” said Rachel Garcia, a bilingual speech language pathologist clinical fellow at Ensemble Therapy Services. She works with 1- to 3-year-old children in Palm Desert, California.

As COVID-19 lockdowns continued, Garcia noticed that children aged 3 and under weren’t learning to talk.

Most babies start talking at about 1 year old. But many in the lockdown generation aren’t talking, even as toddlers, she said.

This problem had devastating implications, Garcia said. Children need to speak for nearly everything.

In a normal year, a few children always struggle with learning to speak. But the pandemic saw these numbers explode.

“I’ve been seeing a lot more of those kids who are two and three years old and have no words,” she said. “That is, in my experience, more than in previous non-COVID years.”

The culprit seemed to be devastating isolation from other children, Garcia said.

Spending time with other young children helps kids learn to talk, she said.

But some lockdown children have gone years without seeing another child—or another adult, Garcia said. Meeting another human being for the first time sometimes terrifies them.

One child cried for a half-hour upon meeting Garcia, she said.

“He got put in a room with me and spent the next 30 minutes crying his eyes out because he was terrified,” she said. “‘There is another person here who is not Mom!’

With only parents as role models, children find themselves in a trap, Garcia said. Parents get good at taking care of their children without language, so they don’t bother learning it.

“Mom and Dad are so in tune with what the kid needs that they just go and do it,” she said.

“You don’t see Mom and Dad as people who used to be kids. You see them as Mom and Dad,” Garcia said.

When lockdown children only have their parents to be with, they sometimes become profoundly uninterested in what other people do, she said.

This sort of independence doesn’t make lockdown children stronger, she said. When these children need help, they give up rather than ask others.

“It is better and easier for them to walk away from something that they want than to ask for it,” she said.

Lockdown children are so lonely they don’t know the meaning of loneliness, Garcia said.

“They’re perfectly content to play by themselves. They always have. Why should they do anything differently?” she asked.

No Conversation, No Education

Developmental delays like these have long-term impacts, according to researchers. A child’s vocabulary at 2 predicts their success as they start school, which, in turn, predicts success later in life.

Even children who weren’t isolated faced big obstacles to learning. Children must learn to differentiate similar sounds and recognize different facial expressions. Masks made both these tasks difficult.

When masks hide adults’ expressions, children understand the meaning of their words less.

A recent survey by the Education Endowment Foundation found that 55 of 57 schools said they were “very concerned” or “quite concerned” about the communication and language development of children. Schools also said they were concerned over personal, social, emotional, and literacy skills.

It’s still too early to know how the damage done by the lockdowns will impact America’s youngest children throughout their lifetime. But the lockdowns have affected older children across America in the same way, according to several teachers.

The children who Garcia works with are too young to be in school yet. But older children also have been affected by the lockdowns.

Jessica Bonner, an elementary school speech pathologist in Birmingham, Alabama, said lockdown children don’t socialize as much as children did before COVID-19. Although Bonner switched schools just before the lockdowns, the differences she saw seemed to go beyond the differences between schools.

She said it seems as though parents let phones raise their children during the lockdowns, and children seem to have accepted this new arrangement.

“It naturally was easier just to hand off the kid to their device and let them do whatever they want,” she said. “They’re in their own personal world without us.”

Increased reliance on the internet has replaced both parents and friends, Bonner added. Often, children sit next to each other watching videos on their tablets rather than interacting with each other, she said.

“They’re sitting next to each other watching something on the tablet instead of really engaging,” she said.

Children like to stay home and use digital schooling, Bonner said. But they tend to be lazy there. They achieve more in person.

“It’s already been shown that they thrive in person when they’re in that building with peers and a teacher,” she said. “I don’t believe that that’s their preferred space.”

Without in-person interaction, children have learned to channel their whole lives through the internet, Bonner said. School, social interaction, and entertainment all pass through Zoom. This consequence of COVID has enabled children to not pay attention in class.

On screens, children tend to get distracted easily, she said. Zoom learning is no substitute for classroom learning.

“If you’re not paying attention to the teacher, why are you even on Zoom in the first place?” Bonner said.

The move to online learning is just one of many COVID-19-related decisions that will likely have a long-term effect, Illinois sixth grade teacher Dan McHenney says.

Even after students returned to school, COVID-19 regulations tended to leave room for laziness, he said. Students who claimed to have COVID-19 received permission to do school online for two weeks, McHenney said.

“That had a very negative effect on commitment,” he said. “I have students that have been gone for 50 days … and that number is still building up, too.”

McHenney said that remote learning was so ineffective that students in 2021 practically weren’t in school. He has seen intelligent students begin to struggle because they weren’t in class enough.

“She is smart,” he said of one student. “She knows how to do it. But once she’s gone, it becomes more and more of a struggle.”

McHenney is new to teaching, but all the other teachers at his school say the children are consistently two years behind schedule, he said.

“I am supposed to start sixth-grade teaching how to divide fractions,” he said. “At the beginning of this year, in many cases, I had to go over addition and subtraction with these kids. That’s a third-grade skill.”

Socially, children are also lagging behind, he said. They make poor decisions.

“I can definitely see that rubbing off,” McHenney said. “Students have been seen scheduling fights in the bathroom, at the school. There are kids that are trying to sharpen pens in my pencil sharpener. And just making poor decisions. They’ll get out of their seat while the teacher’s teaching and they’ll slap some student.”

“I think my other colleagues would agree with that as well,” he said. “Some of the students think that they can do whatever they want.”

McHenney offered students the opportunity to fill in pie charts to say what they did each day during the pandemic. Few followed directions, he said. Some kids filled almost the figure with video games.

High schoolers have also been affected, according to former New York City teacher Aghogho. She left her teaching job recently after having a baby.

“I had brand-new kids come into ninth grade, and their whole first year of high school was spent online, basically isolation in their homes,” she said. “That really affected your mental health.”

Since then, Aghogho has seen attendance rates so bad that only half the class showed up. Sometimes, no one showed up for class at all, she said.

The students who did attend often felt fearful because of COVID-19, Aghogho said. It didn’t matter to them that restrictions had ended.

“They just don’t know how to shed the caution of social distancing,” she said. “It’s very difficult to spend two years telling kids to stay away from each other and now you’re telling them it’s okay. And they don’t trust that.”

Although high school students want to make friends, they struggle to know how after two years of isolation, she said.

COVID-19 freshmen suffered the most, Aghogho added. To find friends, they needed to join clubs and play sports. But schools halted all these activities. Some clubs at her school remained closed.

Without friends, the lockdown students feel frustrated, she said. Many feel depressed.

“They show their frustrations at the teachers and at each other. It’s just a weird dynamic,” she said. “I know it’s gonna get better with time going on. But right now, it’s just very strange.”

Guidance counselors struggle to keep up with the scale of the post-lockdown disaster, Aghogho said.

Students spent the last two years on Zoom classes, where they could get away with playing video games all day with class in the background, she said. Now, they rebel against normal academic demands.

“These kids have had this freedom to just do whatever they wanted,” she said. “And now all of a sudden, they’re back in school. … They don’t like the structure. It’s an inconvenience. So they want to rebel. If you understand human nature, when you’re trying to force rules on people, their instinct is to rebel. And it’s a rebellion that we’re going through.”

Like in other grade levels, Aghogho’s high school students were two years behind as well. High schoolers face standardized tests that help determine their future careers, she said.

“They have to catch up,” she said.

Aghogho said that despite these challenges, she remains optimistic about teachers’ ability to give their students what they need to graduate.

“I believe in the power of teachers. We are very tough people. I’ve seen a lot of bad cases, kids that others believe will probably not graduate, and they made it,” she said. “So it’s possible.”