Why Individual Immunity Is Key to Ending Pandemic: Doctor

A biotech scientist on the future of COVID-19, psychoneuroimmunology, and individual resistance to viral infection
COVID-19 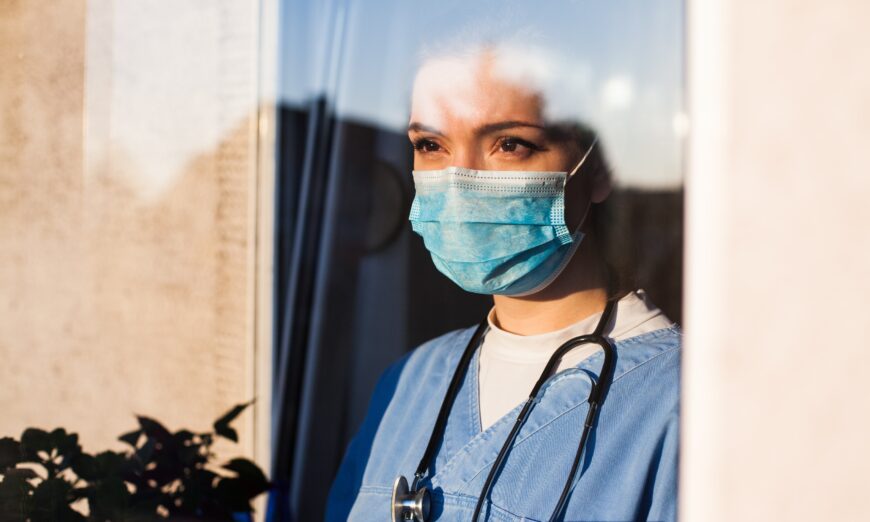 Omicron is unstoppable but less pathogenic, and that might be what allows this pandemic to finally be downgraded to an epidemic, suggests one expert.

Between November 2021 and mid-January, COVID-19 infections had increased sixfold, according to the Institute for Health Metrics and Evaluation (IHME). On January 29, an article in the medical science journal The Lancet titled “COVID-19 will continue but the end of the pandemic is near” was published, making some waves. In it, author Christopher J Murray of the IHME highlighted a few significant increases and reductions that have taken place since the spreading of the Omicron strain.

Together, this all signaled that the pandemic had reached a new stage, and we turned to Dr. Yuhong Dong, Chief Scientific Officer of a Swiss biotech company and expert in antiviral drug development and infectious diseases, to get a better sense of its implications on the future of health.

Dr. Dong summarized the paper’s evidence for us: Omicron’s tremendous surge suggested that by spring this year, half the world would have been infected with the virus at some point. Along with the increase in infections, there was also evidence that some 40 percent of infections caused by old strains were asymptomatic, but that figure could be as high as 80 to 90 percent including Omicron infections. At the same time, COVID-19 related hospitalization ratios were down in the United States, by about 50 percent compared to previous peaks, per the Lancet paper. A preprint from Southern California saw not only a similar decrease in hospitalizations, but a reduction of about 74 percent in the proportion of patients who required intubation or were at risk of dying; the number of deaths had gone down by about 90 percent. Nevertheless, the absolute number of patients hospitalized is still increasing as the total infections are skyrocketing.

“The pandemic is not heading for the end, but it is more likely to gradually turn from a pandemic into an endemic,” Dr. Dong said. Pandemics are widespread, and are also characterized by high pathogenicity and mortality with a great global impact—as the Delta strain was. The IHME models suggest that Omicron is of such high transmission intensity that government policy worldwide will have limited impact on the course of Omicron, she added. For instance, the Omicron wave may likely be over by the time vaccine booster coverage increases significantly, and masking or stay-at-home policies have shown little impact on the transmission of Omicron.

As an endemic, a disease still spreads but pathogenicity and mortality rates decrease significantly and the disease is seasonal, similar to the seasonal flu that comes and goes. Endemics are regional rather than global, and its overall impact is far less significant compared to a pandemic.

“The pandemic is entering a new stage. Omicron carries less than a tenth of the probability of death of the old virus. Some countries are beginning to unblock and relax restrictions,” she said.

Dr. Dong commented on how to make wise use of our time in this new, relaxed period.

“This has made it so we can also relax, and use some of that precious time to unwind, relax, visit friends and relatives. Enjoy live performing arts that lift our spirits. Relieving stress and enhancing our sense of social belonging is beneficial to lifting the immunosuppressive state caused by chronic stress, and this is beneficial in helping people recover and in strengthening their immunity against the virus,” Dr. Dong said.

However, she also cautioned that scientists cannot predict the future.

“We have long been familiar with the cunning and versatility of the coronavirus,” Dr. Dong said.

“It is almost certain that new variants of COVID-19 virus will emerge,” Dr. Dong added that if and when they do, it is possible that localized areas experience outbreaks once again, with unknown levels of severity.

“While we can’t sit back and relax, we can take a break and think about our future epidemic prevention strategies. Assuming that a new variant with a stronger transmission rate than Omicron emerges in some areas in the future (which is already the case with BA.2, a subvariant of Omicron), are there any other methods of prevention that we can use if the external prevention measures do not work?” Dr. Dong asked.

“Modern medicine often says that the vast majority of disease occurrence, development, and regression are the result of a combination of endogenous [originating inside the body] and exogenous [originating outside the body] factors. The endogenous factors are the prerequisites, and the exogenous factors are the conditions of disease.”

Factors that influence immunity and prevention are both internal and external, and Dr. Dong explained this in detail. “External causes include pathogenic microbial infection, virus transmissibility, pathogenicity, etc.,” she said, but there are also a whole host of internal factors on both a micro and macro level.

There are also internal, macro-level factors that affect one’s immunity.

“In recent decades, an emerging science called psychoneuroimmunology has played a good role in bridging people’s understanding of the role of the mind on the immunity of the human body, making concrete what people originally considered to be a relatively abstract and intangible spiritual aspect. For example, people who are more honest, tolerant, and altruistic are less prone to viral infections, while people who lie a lot, get angry, and pay more attention to material enjoyment are more prone to viral infections,” Dr. Dong said.

Any spiritual phenomenon has a material interpretation, Dr. Dong said, citing a study conducted by Dr. Babara L. Fredrickson from the University of North Carolina. The study investigated the antiviral profile of two different groups of people: hedonic (more focused on affective or pleasurable experiences) and eudaimonic well-being (striving toward meaning and a noble purpose beyond simple self-gratification).

Accordingly, these two types of people would likely have a different outcome if being exposed to a similar level of SARS-CoV-2.  This could explain why some people won’t be infected by COVID regardless of their multiple heavy exposures to the virus while others will, Dr. Dong explained.

“We should not underestimate the significance of this research. It has provided solid molecular evidence that what we have in our minds is really not something superficial, as we once thought. Our mind’s effects can even reach the deep level of human genes, which modern gene therapies are focused on, and the effect produced by our mind and consciousness could be far-reaching and profound,” she said.

Combatting the pandemic requires looking at both endogenous and exogenous factors, Dr. Dong added, and we cannot solve the problem by looking at it in a single, isolated way, nor by emphasizing only external factors and ignoring the internal influences that contribute to immunity.

“Especially when the spread of the virus is significantly stronger, our intrinsic antiviral immunity can also respond effectively if it is strong to a certain extent,” she said.

“For example, the immunity of the elderly is generally reduced. A French nun, who was 117 years old, recovered quickly from the infection, mainly because of her natural immunity brought about by her kind and peaceful state of mind. So internal factors often play a more critical role in responding to the virus,” Dr. Dong said.

“Therefore, in the midst of the epidemic’s ups and downs, one thing remains the same: advocating the importance of people’s traditional values of honesty, kindness, and tolerance, and tapping into the spiritual aspects that help people enhance the body’s antiviral potential, which may better help people cope with the epidemic. Ultimately, what will bring the epidemic to an end is the ability of many people to increase their own resistance to viral infection.”

These psychoneuroimmunology factors cannot be discounted, nor should we forget that the workings of the human body remain in large part a mystery.

“In fact, we often don’t know much about how the human body works and how it fights viruses. The human body has a complete defense against viruses from the outside to the inside, and the skin, mucous membranes, innate immune cells, etc. all play a huge role,” Dr. Dong said.

“For example, innate immune cells can identify foreign viruses, and they have a perfect scanning and detection mechanism, just like the FBI’s face recognition technology ̶ once they scan, they know if the person is a suspicious person. The innate immune cells do not need genetic identification to identify viruses; they are very acute. In the microscopic cellular world, innate immune cells recognize viruses by a pattern recognition system (PRR), commonly known as toll-like receptors, and, like the FBI’s face recognition technology, they know if it is a virus when they scan it. They do not require genetic identification, either, and they are also very acute and very powerful. Therefore, people with strong innate immunity may not be infected even if they are not vaccinated.”

“The role of vaccine is to strengthen only a small part of specific (adaptive) immunity which is dependent on viral genes, that is, the anti-body, which is only a later-primed part of our body’s overall antiviral immunity. The anti-body IgG from vaccination is mainly in the blood, and it cannot reach the mucous membrane layer. So the vaccine can’t prevent the infection.”

The vaccine can only play a role in helping neutralize the virus and thereby preventing serious illness, Dr. Dong said.

“Therefore, the determining factor for whether one is infected or not by the virus comes mainly from innate immunity. If a person has a defective innate immunity (the elderly, chronically ill, immunosuppressed), he might still get infected even if he gets the vaccine, so it would be wise if people could find ways to booster a broader aspect of antiviral natural immunity to achieve as maximal protection against COVID as possible” Dr. Dong said.