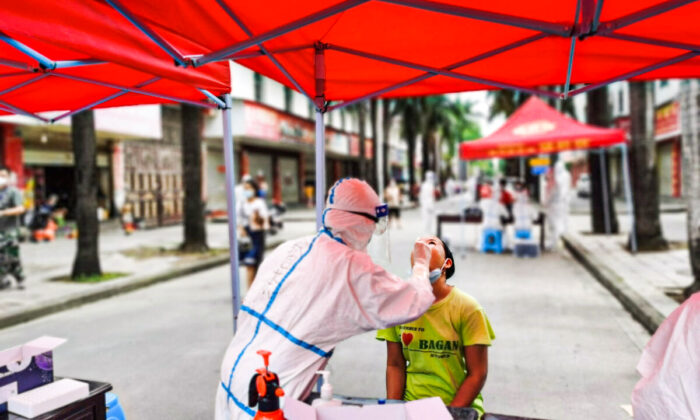 A resident undergoes nucleic acid testing for the COVID-19 coronavirus in the city of Ruili which borders Myanmar, in China's southwestern Yunnan province on July 5, 2021. (STR/AFP via Getty Images)
INSIDE CHINA

The COVID-19 outbreak in mainland China continues to expand, with multiple transmission chains spreading to 20 provinces. Authorities have admitted that the genome sequence of the virus that is causing the infections has mutated. Widening government restrictions have also put many Chinese citizens who are not confirmed close contacts in quarantine based on their mobile phone positioning data.

Among them, the outbreaks in at least 15 provinces are related to the Inner Mongolia tourist group. Chongqing, Jiangsu, Henan, and Liaoning have begun to have outbreaks since Nov. 3, while the number of infected people in Hebei and Heilongjiang has increased rapidly in the past five days. Shijiazhuang city in Hebei Province, which is very close to Beijing, was locked down overnight, while Heihe City in Heilongjiang closed all supermarkets for “hard lockdown management.” Viruses mutations have been detected in some patients.

According to a report by the Chinese regime’s official media Xinhua News Agency, the Heilongjiang Working Group of the Joint Prevention and Control Group of China’s State Council admitted on Nov. 5 that the new outbreaks in Heihe City are severe and complicated. Genetic sequencing has shown multiple transmission chains developing at the same time, caused by viruses with genome sequences that are different from ones previously seen in China.

According to the Australian Financial Review, the deputy director general of the Chinese Centre for Disease Control and Prevention, Feng Zijian, admitted in June that China would unlikely open up like the United States because its low infection rates mean that officials have not had enough data to determine the effectiveness of its vaccine rollout.

While the epidemic in mainland China continues to spread, local governments in various Chinese provinces and cities have continued to put out tougher and wider restriction.

Tens of thousands of people have been tagged as “suspicious contacts” by the government based on their mobile phone positioning data, and tagged for quarantine despite not being confirmed as close contacts.

Individuals are classified “time and space sharers” of infected individuals if their mobile phone data appears in the same location grid, within a significant area of 0.5 miles by 0.5 miles, of a known COVID-19 patient for at least 10 minutes.

Many Chinese have been identified as “suspicious contacts” by these quarantine rules despite not having set foot in any officially designated epidemic areas or come into contact with any confirmed patients. They generally discover without warning that their “health code” on their mobile phone turns yellow, with the classification that they have been a “time and space sharer” with a COVID-19 carrier.

They are then required to report their recent whereabouts to the community authorities, and take two nucleic acid tests within three days. Even if the results of the tests are negative, they still have to continue to self-quarantine for 14 days, during which time they are not allowed to leave the house, even for supplies. Officials called this measure “self-health monitoring.”