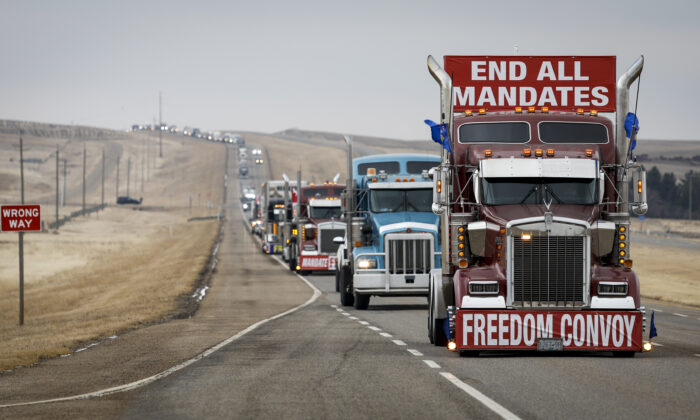 Protesters leave in a truck convoy at the U.S. border crossing after demonstrating against COVID-19 mandates for over two weeks, in Coutts, Alberta, on Feb. 15, 2022. (Jeff McIntosh/The Canadian Press)
Canada

Coutts Border Blockade in Alberta Ends After More Than 2 Weeks

A blockade set up at Alberta’s Coutts border crossing for over two weeks ended Tuesday as protesters said they wanted to maintain the narrative that they are peaceful, and have nothing to do with the individuals arrested by RCMP for having access to a cache of firearms and ammunition.

“We want to wrap this up in a peaceful way,” said convoy organizer Marco Van Huigenbos in a video message, posted by Rebel News reporter Syd Fizzard on Twitter the evening of Feb. 14.

“After the … news released that the RCMP made arrests and [came] forward with an arrest, resulted in long-arm firearms, handguns, and protective equipment, … we, as the Coutts convoy, have decided that as a peaceful protest, and to maintain that narrative, we will be rolling out tomorrow morning at 10 a.m.”

On Feb. 14, RCMP arrested a total of 13 people and uncovered 13 long guns, handguns, multiple sets of body armour, a machete, a large quantity of ammunition, and high-capacity magazines.

Meanwhile, organizers of the Freedom Convoy in Ottawa said they have notified police after being told that “nefarious elements” are planning to plant weapons at the Ottawa COVID-19 mandate demonstrations as a “pretext to forcibly remove peaceful protestors.”

In a video posted on social media on Feb. 14, Daniel Bulford, a former RCMP officer who is helping the protest organizers with security, said they have received information from sources they consider to be reliable that the weapons may be planted.

“Today on Feb. 14, we received information from multiple believed, reliable sources that firearms may be planted in Ottawa, specifically around the Freedom Convey, to discredit the protest and to use as a pretext to forcibly remove peaceful protestors,” Bulford said.

“Due to the nature of this information, we felt it prudent to notify the public in the interest of their safety. This private intelligence correlates with the approximately 2,000 firearms stolen in Peterborough, Ontario, on Sunday morning, Feb. 13.”

The protest at the Coutts border crossing started on Jan. 29. It is one of several demonstrations inspired by the Freedom Convoy encamped in Ottawa, which started in opposition to the federal government’s vaccine mandate for cross-border truck drivers.

The first convoys converged in Ottawa on Jan. 29, and many protesters have indicated they will stay until all COVID-19 mandates are lifted. Since then, the movement has mushroomed to include supporters from across the country who oppose all pandemic mandates and restrictions imposed by governments.

Van Huigenbos said he hoped their protests have started something that will have “wide-reaching effects” on the governments at all levels—“that governments will continue to go back to the grassroots, listen to the constituents, and that these mandates, these restrictive mandates will soon be eliminated,” he said.

“We thank everybody for all their support, [and] for the prayers.”

Canada Border Services Agency confirmed on Feb. 15 that operations have resumed at the Alberta-U.S. crossing.

A video posted to social media showed RCMP members shaking hands and hugging protesters. In the background, people holding hats or hands to their chests, or with arms draped across each other’s shoulders were singing “O Canada.”

Katabella Roberts and The Canadian Press contributed to this report.