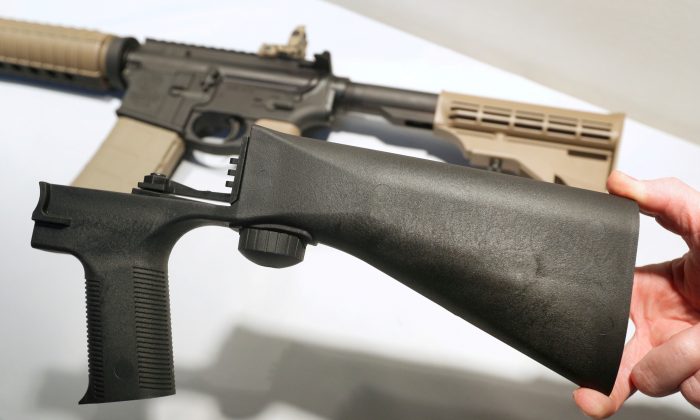 A federal court on Thursday ruled that the Bureau of Alcohol, Tobacco, Firearms, and Explosives (ATF) cannot classify bump stocks as machine guns.

The U.S. Court of Appeals for the 6th Circuit further indicated that the federal ban on bump stocks, which are devices that can increase the rate of fire for semi-automatic weapons, is likely unlawful and should be placed on hold. The ban on the devices was implemented following the 2017 Las Vegas mass shooting that left 58 people dead after the suspect used bump stocks.

The Department of Justice issued the 2017 ATF rule “to clarify that [bump stocks] are ‘machineguns’ as defined by the National Firearms Act of 1934 and the Gun Control Act of 1968” as these devices “allow a shooter of a semiautomatic firearm to initiate a continuous firing cycle with a single pull of the trigger.”

But, according to the ruling this week, the appeals court said that such changes in criminal law are up to Congress, not the executive branch.

“It is not the role of the executive—particularly the unelected administrative state—to dictate to the public what is right and what is wrong,” stated Judges Alice Batchelder and Eric Murphy of the 6th U.S. Circuit Court of Appeals, who wrote the 2-1 majority opinion. “Granting the executive the right both to determine a criminal statute’s meaning and to enforce that same criminal statute poses a severe risk to individual liberty,” they added.

“Entrusting the interpretation of criminal laws to the judiciary, and not the executive mitigates that risk and protects against any potential abuses of government power,” the judges further said.

The judges also wrote that a bump stock cannot change a semi-automatic weapon into a fully automatic, select-fire machine gun.

“We are glad the court applied the statute accurately, and struck down the ATF’s illegal overreach and infringement of gun owners’ rights,” he said in a statement on the Virginia-based group’s website. Gun Owners of America filed the lawsuit to seek an injunction to prevent the ATF from implementing the rule.