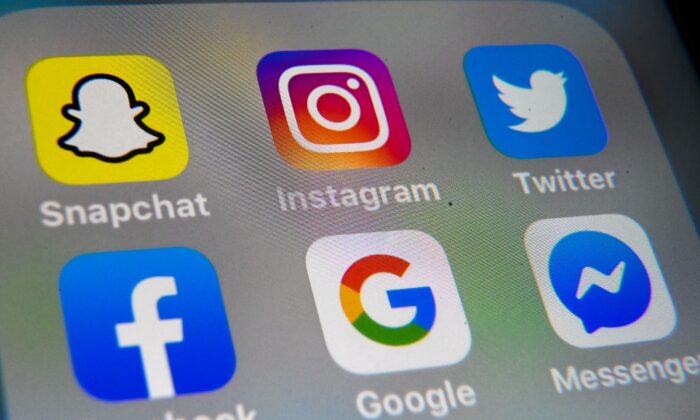 Logos of the Big Tech giants are displayed on a tablet on Oct. 1, 2019. (Denis Charlet/AFP via Getty Images)
Media & Big Tech

A federal appeals court in New Orleans has ruled in favor of a Texas law that seeks to rein in the power of social media companies like Facebook and Twitter to censor free speech.

The decision by the 5th U.S. Circuit Court of Appeals in New Orleans (pdf), handed down on Sept. 16, upholds the constitutionality of a Texas law signed by Gov. Greg Abbott last year and delivers a victory to Republicans in their fight against big tech censorship of conservative viewpoints.

“Today we reject the idea that corporations have a freewheeling First Amendment right to censor what people say,” U.S. Circuit Court Judge Andrew Oldham wrote in the opinion.

“Because the district court held otherwise, we reverse its injunction and remand for further proceedings,” Oldham added, setting the stage for a showdown in the U.S. Supreme Court.

After the law, known as House Bill 20, was passed last year, NetChoice and the Computer & Communications Industry Association (CCIA) sued.

The groups argued in their lawsuit that private companies like Facebook and Twitter have a First Amendment right to moderate content that’s posted on their platforms and decide on what forms of speech to allow or ban.

“The Act tramples the First Amendment by allowing the government to force private businesses to host speech they don’t want to,” NetChoice said in a statement. The groups also argued that the Texas law not only does not prevent censorship but allows Texas to “police and control speech online, overriding the First Amendment rights of online businesses.”

A lower court sided with the lawsuit and decided to block the law, with Friday’s ruling by the 5th Circuit Court of Appeals overturning that decision.

He said the implications of the big tech platforms’ argument are “staggering” as they would allow entities like social media companies, banks, and mobile phone companies to cancel the accounts of people who express views or spend money in support of political parties or views such corporations oppose.

Oldham also said that the protections sought by platforms in challenging the Texas law would allow them to win a dominant market position by attracting users with misleading claims of being champions of free speech but later cracking down on expression.

Texas Attorney General Ken Paxton, who has been a staunch backer of the law, hailed the court’s decision in a statement on social media.

“I just secured a MASSIVE victory for the constitution & Free speech in fed court #BigTech CANNOT censor the political voices of ANY texan!” he wrote on Twitter.

“We remain convinced that when the U.S. Supreme Court hears one of our cases, it will uphold the First Amendment rights of websites, platforms, and apps,” Szabo said.

“‘God Bless America’ and ‘Death to America’ are both viewpoints, and it is unwise and unconstitutional for the State of Texas to compel a private business to treat those the same,” Matt Schruers, CCIA president, said in a statement.

An appeal of Friday’s decision could put the issue before the U.S. Supreme Court, where conservatives have a majority.