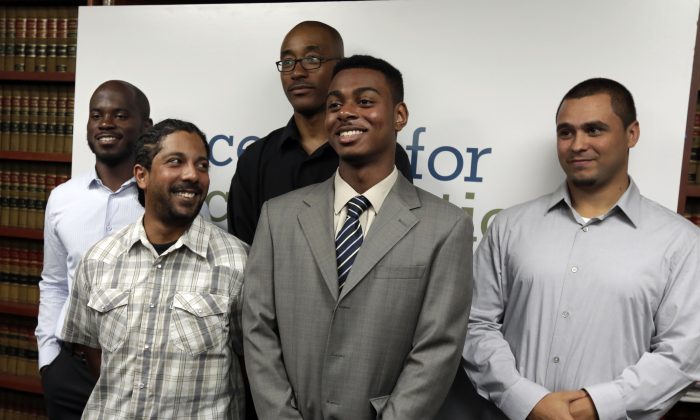 The decision, handed down by U.S. District Judge Shira A. Scheindlin, found that the NYPD’s use of stop-and-frisk in its current form violates both the Fourth and the Fourteenth amendments of the Constitution.

Darius Charney, a senior staff attorney at the CCR and lead counsel on the case, said at a press conference Monday that there were 104 witnesses in the trial, most of whom were NYPD officials. He added that a large amount of NYPD data was analyzed, and there is an 8,000-page trial record for the case.

CCR emphasized the degree to which Judge Scheindlin analyzed relevant information, data, and testimony to make a carefully-weighed decision. Of the two opinions she issued on the case, the first was a 198-page liability opinion, and the second was a 39-page remedies opinion to address future stop-and-frisk cases.

Over 80 percent of the 4.4 million stop-and-frisk cases between June 2004 and June 2012 were of African-American and Hispanic individuals, according to the ruling.
Nicholas Peart, one of the plaintiffs who filed the class action lawsuit, said he was “very happy” with the outcome.

“This restores a sense of trust that our voices do count,” said Peart.

Neither the judge’s opinion in the case nor the testimony of the plaintiffs aim to end stop-and-frisk, but reforms of the current system are being sought.

Scheindlin defined the legal foundation for a stop: a police officer has “individualized, reasonable suspicion that the person stopped has committed, is committing, or is about to commit a crime.” To move on to a frisk, the officer must suspect the person stopped is armed and dangerous. The frisk isn’t to uncover evidence, but to find any weapon the person might be carrying so that the officer can proceed with the investigation safely.

Zimroth will be focused on making sure that the city complies with stop-and-frisk reforms. A facilitator, who has not yet been named, will also be appointed by the court. That individual’s role will be focused on facilitating community input and collaboration.

Zimroth, who could not be reached for comment on Monday, is a partner at Arnold and Porter LLP, and was chief assistant district attorney in Manhattan earlier in his career, which is the highest non-elected position in the district attorney’s office. He is also the past architect of city election finance law.

Working with the police, the city, and community groups, Zimroth is to propose initial changes to policies, training, supervision, monitoring, and discipline regarding stop-and-frisk. Further reforms will proceed under the guidance of the facilitator, who will work with all parties to extend, as necessary, the initial reforms.

Other remedies ordered by Scheindlin include a trial program that requires police to use body cameras in one precinct per borough.

“This is less about celebration and more about validation,” said Council Member Jumaane Williams, one of the council’s most outspoken advocates of reforming stop-and-frisk. He added that stop-and-frisk in its current form has been dividing the community.

He said that because of the mayor’s inflexible attitude over addressing the unconstitutional aspects of stop-and-frisk, several years and numerous city resources have been wasted in fighting against it.

“It’s 2013 and we’re still arguing civil rights cases that are reminiscent of 1963,” said Williams. He did say, though, that he was pleased with the court’s decision.

A vote on a city council measure that addresses other issues related to stop-and-frisk, the Community Safety Act, will go forward on Aug. 22 as planned. The Act was passed once by the city council but was vetoed by Mayor Michael Bloomberg. The Aug. 22 vote will attempt to override that veto.

Williams said that the Inspector General to be established by the Community Safety Act would have a much broader role than the judge-ordered federal monitor.

“Throughout the case, we didn’t believe that we were getting a fair trial,” said Bloomberg, adding that the NYPD needs to have the ability to “stop and question suspects that officers have reason to believe have committed crimes, or are about to commit crimes.”

Bloomberg said he plans to appeal the decision.

Commissioner Kelly said he found it “disturbing and offensive” that the decision reflects “the notion that the NYPD engages in racial profiling.”