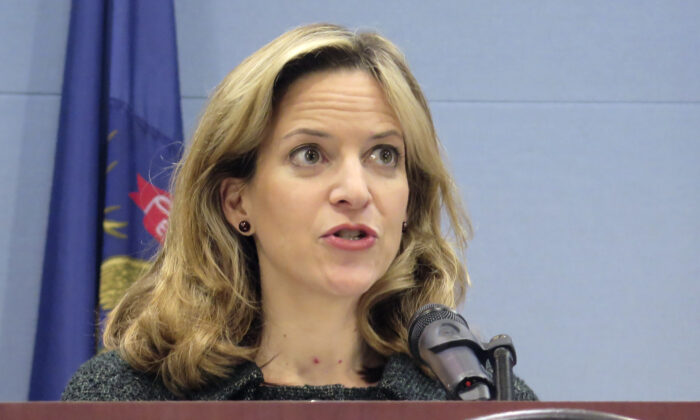 How many dead people should remain on Michigan voter rolls? The answer may be determined by a federal judge.

The Public Interest Legal Foundation (PILF) on Nov. 3 sued Michigan Secretary of State Jocelyn Benson, a Democrat, for allegedly failing to remove from the state’s voter rolls the names of 26,000 registered voters who have either died or moved away.

According to PILF President J. Christian Adams, the failure to remove the names “creates an opportunity for fraud.”

The lawsuit also alleges that 334 people registered to vote after they died, with 15 of those registrations occurring in 2020.

Benson’s office told The Epoch Times that it doesn’t comment on pending litigation. However, Tracy Wimmer, a spokesperson for Benson, told Fox News: “Michigan maintains its voter registration list in accordance with all state and federal laws.

“As we’ve seen throughout the past year, meritless lawsuits serve as press releases for those seeking to further election misinformation and undermine American democracy.”

The office of the Michigan Attorney General filed a response to PILF’s complaint and a motion to dismiss the case on Dec. 13. In the reply, Benson denies any failures to perform list maintenance activities required by federal law.

Her lawyers point out that the National Voting Rights Act (NVRA) requires only that a state conduct a general program and make a reasonable effort to remove the names of ineligible voters from the official voter registration list by notice of death, change of residence, or the voter’s request.

“The NVRA does not require a state to enact an exhaustive program to remove every voter who becomes ineligible,” Benson’s counsel wrote.

The complaint alleges that “when more than 25,000 deceased registrants are identified on the qualified voter list and not removed for an extended period of years, the list maintenance program is not only unreasonable, it is failing.”

Among other requests, PILF is asking the court to require Benson to remove the names of deceased voters from the rolls and to order her to allow inspection of records pertaining to the implementation of programs and activities used in cleaning up the voter list.

Adams said the numbers speak for themselves and is confident the suit will survive the motion to dismiss.