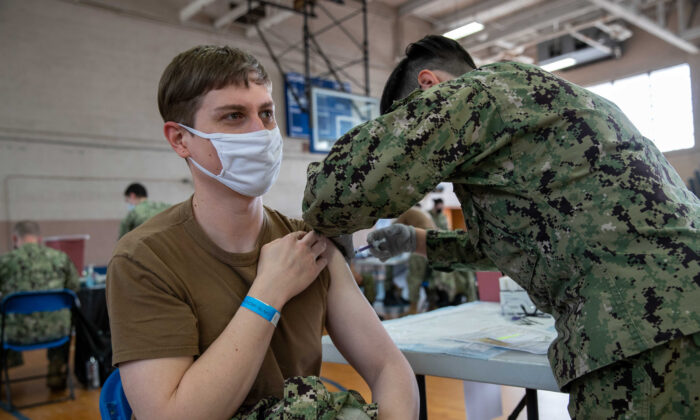 A federal court that blocked the punishment of 35 U.S. Navy service members seeking religious exemptions to the military’s COVID-19 vaccine mandate should widen the ruling to cover any Navy personnel seeking an exception, lawyers said in a Jan. 24 filing.

The complaint in the case, U.S. Navy SEALs 1–3 et. al v. Lloyd Austin et. al, was amended to a class-action effort. That means the judge presiding over the case could widen the block of the mandate to the nearly 4,000 Navy active-duty or reserve members who are seeking religious exemptions.

“Our clients are boldly leading the fight against the vaccine mandate, but no service member should face discipline or punishment for following their faith,” Mike Berry, general counsel for First Liberty Institute, which is representing Navy personnel in the case, said in a statement.

“The fact that the military continues to demonstrate hostility to anyone who expresses religious objection to the vaccine mandate shows that the Biden Administration does not care about religious freedom. The lawsuit seeks to protect as many service members as possible from further punishment. We have to put a stop to this before any more harm is done to our national security.”

The Navy has approved zero religious exemptions, and only two have been approved by the entire U.S. military. That runs afoul of federal law, including the Religious Freedom Restoration Act, according to the plaintiffs.

U.S. District Judge Reed O’Connor, a George W. Bush appointee, agreed, ruling in December 2021 that the Navy does provide a process to apply for religious accommodations, “but by all accounts, it is theater.”

“The Navy has not granted a religious exemption to any vaccine in recent memory. It merely rubber stamps each denial,” O’Connor said.

A Navy spokesperson told The Epoch Times in an email shortly after the ruling that the branch “supports and respects the beliefs and religious practices of our Sailors.”

“Waivers for immunizations are balanced with operational readiness, unit cohesion, good order, discipline, health and safety,” the spokesperson wrote. “When this interferes with a member’s right to practice their faith according to the dictates of their conscience, the Navy works with the member to find ways to accommodate religious practice that are the least burdensome way possible for the member. All requests for religious accommodation, to include the COVID vaccine mandate, are handled in the same manner.”

Twenty-two Navy members have been discharged for refusing to get vaccinated as of Jan. 19.

The military branch has only granted a single religious accommodation request since the beginning of 2015, according to documents filed in a different case challenging the military mandate, which was imposed by Secretary of Defense Lloyd Austin with support from President Joe Biden.

The amended complaint comes several days after Biden administration attorneys asked the U.S. Court of Appeals for the 5th Circuit to overturn O’Connor’s preliminary injunction, which blocks punishment against the 35 Navy personnel as the case is decided by the courts.

The administration hasn’t yet submitted its argument as to why the injunction should be lifted. It was ordered by the court to provide certain information by Feb. 7, according to the docket.