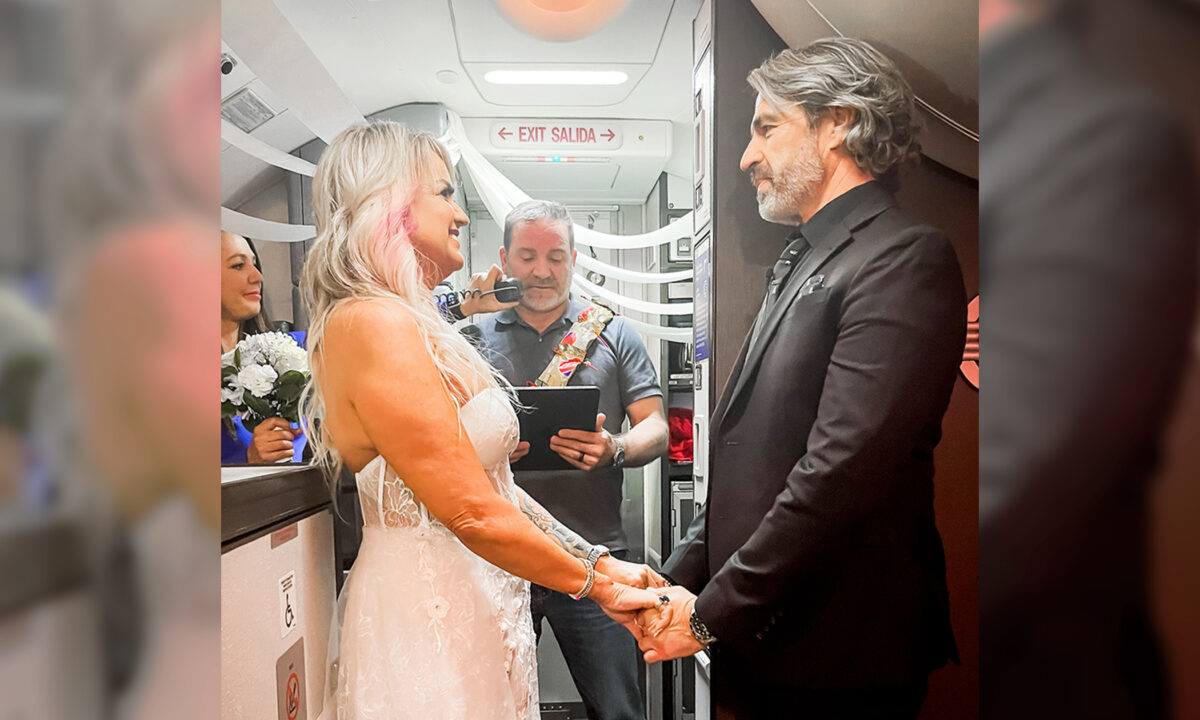 Couple’s Wedding Plans in Vegas Get Ruined by Flight Delay, Crew and Passengers Marry Them Onboard

An Oklahoma city couple excited for a spontaneous elopement to Las Vegas had their wedding plans dashed by flight delays. But after a serendipitous meeting with a minister at the airport, the couple said their vows at 37,000 feet, with the cooperation of the pilot, flight crew, and dozens of well-wishing passengers.

Pam and Jeremy Salda started dating in August 2020. After dating for almost two years, in April 2022, the couple discussed about how fun it would be to elope. Just five days later, they booked a flight to Las Vegas for April 24 and arrived at the airport in full wedding attire with a Vegas wedding chapel appointment for 9 p.m. that evening.

A representative from Southwest Airlines said in a statement to The Epoch Times that the couple kept their plans secret from family and friends.

“But their itinerary took them through DFW Airport, where their final leg to Vegas was eventually canceled after several delays,” they explained.

Amid the ongoing delay, Pam and Jeremy met Chris, who was also booked on their canceled flight, at the gate area of DFW Airport. Chris told the couple he was an ordained minister, and after overhearing Pam and Jeremy’s ruined plans, he offered to marry them in Vegas himself.

The trio quickly booked the last three tickets on Southwest Airlines flight 2690 to Las Vegas from Dallas Love Field Airport and shared an Uber across the city. While boarding, the pilot of their flight, Captain Gil, asked Pam about her wedding dress.

“She explained their story to him, and joked that maybe they should just get married on this Southwest flight, instead,” said the Southwest Airline representative. “To her surprise, the captain said, ‘Let’s do it!'”

“Our flight crew hung toilet paper streamers, made Chris a sash out of snack bags, and cued up the wedding march,” they continued. “Customers onboard turned on their call buttons to light the aircraft as Pam walked down the aisle; Julie, one of our flight attendants, was happy to stand in as the impromptu maid of honor.”

One passenger even donated a leftover powdered donut as a “makeshift wedding cake,” and another donated an old notebook that was filled with well-wishes by fellow passengers and cabin crew as a guestbook.

There was even a professional photographer onboard, who volunteered to take the couple’s wedding photos. Minister Chris, who also works in broadcasting, captured the proceedings on a 4K video.

“As she starts walking down the aisle, everybody’s phones come out, video starts going. They’re flipping on their flash and back lights to light it up. The whole plane lights up! She’s walking down in this white dress like an angel,” Jeremy later told Fox 13 News.

Pam added: “My voice just started to crack because it was so touching.”

She was also touched to receive the “sweet, kind, congratulatory notes,” from her co-passengers.

A Southwest representative told The Epoch Times that the crew onboard flight 2690 were “thrilled” to play host to Pam and Jeremy’s special day.

“Our employees are famous for their heart and hospitality, and we know our crew, our customers, and the couple will remember this flight for a long time to come,” they said. “We offer our congratulations to the newlyweds, and well-wishes for their new life together.”