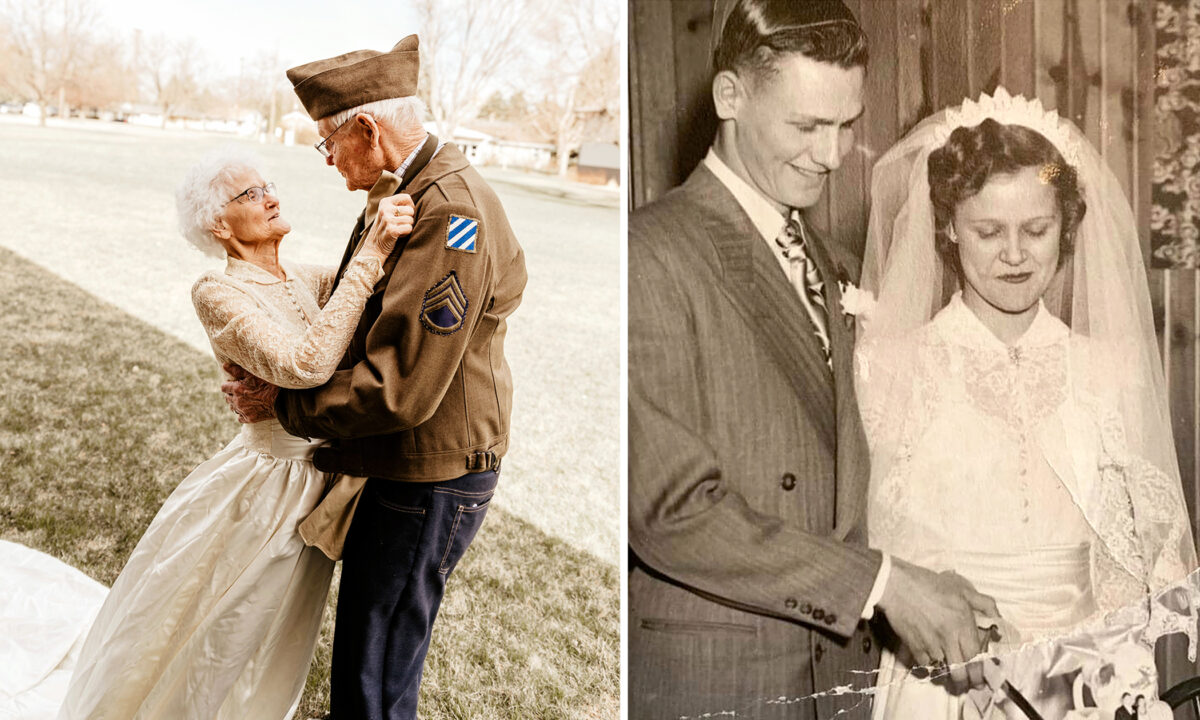 A South Dakota couple married for 70 years celebrated the incredible milestone with a romantic photoshoot, and the bride wore her original wedding dress.

Nancy Lubbers, 87, dusted off her $35 white lace gown for the heartwarming shoot with her husband, Melvin, 91.

The lovely pair first met at a skating rink, and Melvin later proposed at a ballpark. The teenage sweethearts married on Jan. 6, 1952, when Nancy was just 16 years old.

Seven decades later, the pair have five children, with their ages ranging between 67 to 54. They are blessed with 12 grandchildren and 21 great-grandchildren.

The family celebrated the couple’s 70th wedding anniversary in January this year. Their youngest granddaughter, Anna, a professional wedding photographer, decided to mark the occasion with a special photoshoot in the family garden.

Anna said: “My grandparents only have a couple of photos from their wedding day. I came up with the idea to take photos of Grandma in her dress and then my mom, Melissa, found Grandpa’s Korean War army suit for him to wear.

“I’m so glad I got to capture their love, even if it was 70 years after their wedding day. The photos are precious and our family loves them.”

When asked how she felt to wear her gown again, Nancy said: “It really was an honor that I could still get in it. My dress was something special and I loved it, so I just preserved it and kept it all these years.

“It felt really good to wear it again and we had fun reminiscing about our wedding day and the photoshoot was a lot of fun.”

After seeing his wife of 70 years in her wedding gown again, Melvin said that it “certainly brought back some good memories.”

Back in 1952, the couple had a church wedding followed by a meal in the church basement; Melvin recalled they had ice cream and cake for dessert.

Melvin always jokes that he got Nancy’s rings in a gumball machine, but the young couple actually paid for the wedding themselves. The newlyweds had no chance for a honeymoon, with Melvin being called for service just three weeks after marrying. He left for four months to complete basic training as the sergeant and tank commander.

“I was home for a 10-day leave, then I was sent to Japan for training before being sent to Korea to fight,” Melvin recalled. “I was in Korea for eight months in 1952.”

After the war, Melvin worked as a salesman and had a hobby farm with sheep, and Nancy worked at a grocery store.

Talking about their secret to a long and happy marriage, Melvin said: “You won’t always agree, sometimes you have a disagreement, but when you have one of those you sit down and talk about it and come up with an answer. And once it’s resolved, don’t bring it back up.”

Nancy added: “Always respect each other even when you don’t agree. Show lots of love and care and forgive and forget. Just make the best of your life.”