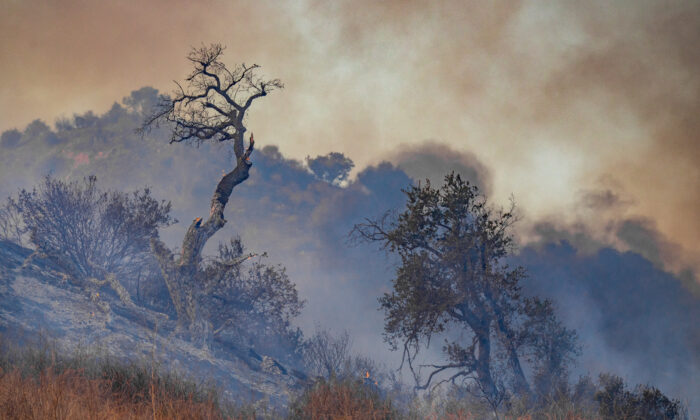 Ineffective forest management policies are much more to blame than climate change for the massive destruction from wildfires in recent years in California, says Sierra County Supervisor Paul Roen.

Fighting wildfires, he said, has morphed into a “self-sustaining” industrial complex, he told The Epoch Times.

“It is out of control. The intent is no longer to put fires out, it’s to manage budgets. It’s just embarrassing, and that’s what I do for a living. I would be the first to say it, and I’m on the record saying it,” Roen said.

In addition, interference from environmental lobbyists has turned forest management, forestry, firefighting, and wildfire prevention into a “train wreck.”

“It’s just really frustrating. I’ve been in fire work for 25 years and what we’re doing today is not working. We’ve got to do something different because this is just getting ridiculous,” Roen said.

Meanwhile, California lawmakers have delayed a wildfire oversight hearing indefinitely amidst the lead-up to the recall election on Sept. 14, when California voters will decide whether to oust Gov. Gavin Newsom.

Butte County Board of Supervisors Chairman Bill Connelly on Aug. 12 drafted a letter to Secretary of Agriculture Tom Vilsack and U.S. Forest Service (USFS) Chief Randy Moore over how the Dixie Fire and last year’s North Complex Fire were handled. However, the letter was revised to “make it less tense,” and to reflect the views of the entire board before it was sent.

The original draft accused the Forest Service of dereliction of duty and demanded an investigation into the way the Dixie Fire and last year’s North Complex Fire were handled.

“Because of the gross negligence of the USFS fire management philosophy, we no longer have trust and confidence in the decision-making process being used by the USFS,” it read.

The final letter was sent 12 days later. It stated: “The fire suppression philosophy of the USFS needs to be questioned. The ‘fire use policy’ which has been used consistently by the USFS [which allows a fire to burn provided it does not pose an immediate risk of damage to homes or lives] is clearly not effective in these times. This practice in recent years has not worked. With the extreme dry conditions and weather patterns, fires are able to burn over 15 miles in one day.”

The letter also acknowledges that the Forest Service has recently stated it “will discontinue this policy for this fire season.”

Both versions of the letter request reimbursement for costs related to the county’s response to the fires and recovery efforts.

The Dixie Fire, one of the largest fires in California history, began above the Cresta Dam in the Feather River Canyon on July 14 and is still raging. It has burned at least 765,635 acres and was 48 percent contained as of Aug. 29, according to the California Department of Forestry and Fire Protection (Cal Fire). It has destroyed more than 1,200 structures and affected five counties, including Butte, Plumas, Tehama, Lassen, and Shasta.

Meanwhile, the Monument Fire and McFarland Fire have each burned more than 100,000 acres. The Caldor Fire in El Dorado County has destroyed the town of Grizzly Flats, Roen said. That fire has burned 126,566 acres and more than 450 homes.

As a chairman of the Sierra County Board of Supervisors in 2014, Roen declared a local state of emergency embraced by all five supervisors. Today, that resolution “reads like a crystal ball to where we are today,” he said. “It’s just amazing.”

“I asked for every other forested county in the state to support our concept,” he said. “We got several counties to participate, but I wanted the whole state to stand up and scream.”

The local state of emergency was updated and renewed in 2016, but ultimately the effort failed to gain traction with state and federal authorities.

The resolution warned the U.S. Forest Service and state agencies that the “uncontrolled build-up of natural fire fuels” posed a “severe and ongoing threat of catastrophic wildfire.”

The document is evidence of the constant battle to mitigate fire risks at the wildland-urban interface instead of “burning out” these communities,” said Roen, who has served as a fire commissioner and now currently sits on the Sierra-Nevada Conservancy board.

Roen said the main reason California continues to fight so many devastating forest fires is that Cal Fire and the U.S. Forest Service keep making the same mistakes “over and over again” and expecting a different outcome.

The first mistake, he said, was allowing environmental groups, such as the Center for Biological Diversity and Sierra Club, to stand in the way of fuel reduction techniques such as the “thinning” of forests, which involves logging some trees and removing dead ones to create healthier forests and reduce fire risk.

Both environmental groups have large legal teams and have sued government agencies and companies involved in primary industries such as logging and mining.

In a statement in response to the allegations, a spokesman for Cal Fire said the agency supports the “active reduction of wildland fuels” and the “development of commercial enterprises that utilize vegetation removed for fuels reduction.”

Until the Camp Fire in 2018, the Center for Biological Diversity and Sierra Club interfered with efforts by contracted Pacific Gas & Electric Company (PG&E) maintenance crews to remove trees near power lines, Roen said.

Contractors were told by environmentalist groups which trees they could remove and which ones they couldn’t, he said.

The Camp Fire was caused by a faulty PG&E transmission line. It was the most deadly and destructive wildfire in California’s history, killing at least 85 people and razing the town of Paradise.

In years preceding the Camp Fire, Roen said PG&E maintenance crews had to “take a tree here and a tree there to not hurt anybody’s feelings,” instead of removing all trees that could potentially fall and hit a power line. “And, that is part of why we are where we are today,” he said.

Though Cal Fire states the cause of the Dixie Fire is “under investigation,” Roen said he’s heard reports from reliable sources that a tree fell on a power line causing a short.

According to a PG&E report (pdf) submitted to the California Public Utilities Commission on July 18, a PG&E worker on July 13 first discovered the fire at the base of a tree leaning on power lines.

ABC 10 reported that PG&E released photos taken from a drone during a 2019 site inspection to a probation judge on Aug. 16. The photos show a fir tree leaning toward the power lines at the origin of the fire, but more recent photos show the tree, believed to have fallen the morning on July 13, “being held up by power lines,” the report stated.

PG&E told the court the tree wasn’t considered a hazard in early 2021, when the site was last inspected, ABC reported.

In a release, the organization stated that “biomass energy is often promoted as a tool to incentivize large-scale tree-cutting (‘thinning’) under the claim that this will protect communities and forests during wildfires.” The nonprofit group stated that thinning is an “ineffective” means of protecting homes and communities.

“Although biomass energy is promoted as a means for disposing of debris piles from forest thinning projects, it’s mostly lumber mill residues from commercial logging that end up being subsidized. Meanwhile, biomass extraction does significant ecological damage to forests,” according to the organization.

The organization claims that “dead trees do not increase wildfire and should not be sent to bioenergy facilities.” It also states that “dead trees—standing or fallen—provide numerous ecological benefits such as wildlife habitat, soil stabilization, water quality, and carbon storage. These ecological benefits are lost when dead trees are removed and incinerated in biomass power plants.”

However, Roen said it’s only common sense that dead trees and dry debris create a tinderbox and needlessly stoke forest fires with extra fuel that could be removed.

“It’s not rocket science,” he said.

Roen said if a whole forest burns, all the benefits of leaving the debris, as well as everything else—including the wildlife—are lost anyway.

“The forest is just a big lawn,” he said. “If you don’t take care of it, what happens? It’s a renewable resource. If we don’t utilize it, Mother Nature will take care of it. She’ll clean it up and that’s what she’s doing.”

Roen estimates that more than half of the Plumas National Forest has been lost to wildfires in the past few years.

Roen disagrees with the narrative that climate change is the sole cause of the wildfires in California over the past several years.

“It’s not,” he said. “This issue we’ve created ourselves.”

While “there is no doubt” climate change is a factor, that’s even more reason to spend funds wisely and develop better forest management and more practical wildfire prevention policies, he said.

Roen said he wouldn’t go as far as suggesting environmental groups have a vested interest in forest fires but pointed out they do benefit from any crisis that helps promote the climate change narrative.

Heavy smoke-filled skies spanning from the Desert Southwest to the Pacific Northwest and beyond over the past two summers should send a signal to federal agencies, such as the U.S. Forest Service, and state governments in California, Oregon, and Washington that their policies aren’t working, he said.

The U.S. Forest Service didn’t immediately respond to a request from The Epoch Times for comment.