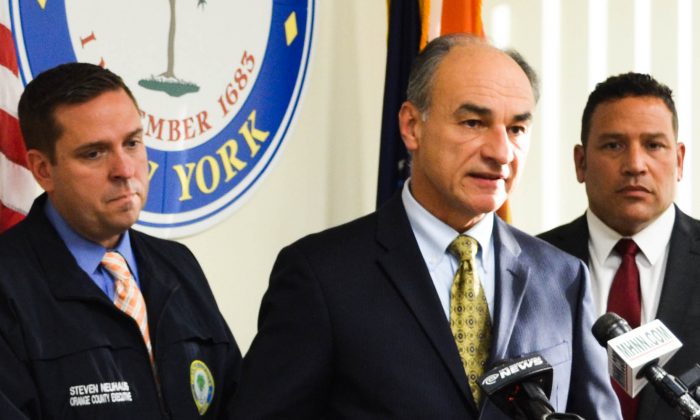 GOSHEN—John Hankins, an inspector with the county’s Department of Consumer Affairs and Weights and Measures, discovered a device on a gas pump that steals credit card data in the Town of Newburgh on Nov. 16. Managers at the Shell station on Route 52 are cooperating fully with Newburgh police in their continuing investigation.

County Executive Steve Neuhaus said the county has often warned county residents about scammers that install skimming devices on ATMs and gas pumps. The device discovered in Newburgh is the first, according to Charles Mitchell, commissioner of consumer affairs and weights and measures.

What we try to do is get people be more vigilant in how they use their cards.
— Wilfredo Garcia, chief investigator in the Office of the District Attorney

The Weights and Measures Bureau in the state Department of Agriculture recently renewed an effort to crack down on illegal credit/debit card skimmers at gas pumps across New York. Agriculture and Markets staffers train county weights and measures inspectors to spot skimming devices in their communities.

Wilfredo Garcia, chief investigator in the Office of the District Attorney, said, “What we try to do is get people be more vigilant in how they use their cards.”

Mitchell credits Hankins with recognizing the device. “John was out there. He did the investigation, he looked at the pumps. He found the device.” The gas pump has been shut down and the device has been removed. Mitchell said only one has been found so far among the more than 1,500 gas pumps in the county.

Garcia said “whether it’s a gas pump or an ATM that looks a little suspicious, a little bit askew where you are actually inserting the card, you should probably stop using that card immediately and approach either the bank manager or the store manager or the pump attendant.”

He said some skimmers have pinhole cameras on ATMs aimed directly at a card that collects card data. “These criminals have nothing else to do but run out to the bank and take out all your money or charge something on the Internet.”

Neuhaus said simple precautions can protect credit card data, such as shielding your pin number with your hand, and not accepting help from someone standing by. Mitchell advised anyone using their credit or ATM card to “just take a moment, make sure no one is watching you.”

Experts recommend that you keep your card in sight. Use cash if you are concerned about letting go of your card at restaurants.

Criminal skimming devices got wide notice in 2009. Banks and security experts said there are several ways the devices can be detected on ATMs. The flashing light is easily observed at the place where the card is inserted, but most skim devices when fitted will obscure the flashing entry indicator.

A long plastic piece above the screen would have a pin hole with a camera that can capture card data. A bank brochure holder on one side could have the skimming device installed to grab data. The U.S. Secret Service estimates that annual losses from ATM fraud totaled about $1 billion in 2008, or about $350,000 each day.

In the wake of the Paris incident, Commissioner of Emergency Services Walter Koury, asked the public to be vigilant in public places, and to notice unusual behavior. “To take pictures of actors performing—that is a usual thing. But when someone turns around and takes pictures of exits, that’s quite unusual.” Koury stressed that even one tip could thwart an attack. The tip line for New York is 1-888-SAFE-NYS or online at nyshomelandsecurity.com.