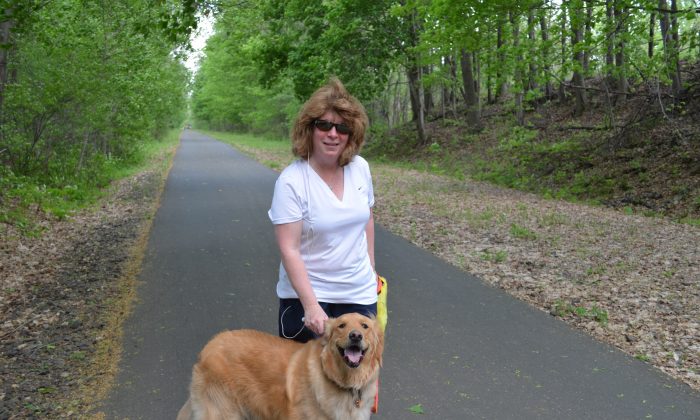 Robin and her Golden Retriever, Ellie, on the Goshen section of the Heritage Trail on May 16, 2015. (Yvonne Marcotte/Epoch Times)
New York

County Aiming for Heritage Trail to be Complete by 2018

MIDDLETOWN—Progress is being made on the extension of the Heritage Trail, but approvals, endangered species, construction, and an intermunicipal agreement are all making that progress slow.

County Commissioner of Parks, Recreation, and Conservation, Richard Rose, told advocates of the Heritage Trail in Middletown on July 12 that the county is doing what it can do to move the project forward, but the timing will depend a lot on outside factors.

“All these things require approvals by agencies that are outside of our control,” Rose said.

The 10-mile extension is broken up into three parts: the first from downtown Goshen to Hartley Road, the second from Hartley Road to Main Street in Middletown, and the third from Main Street to Ingrassia Road in Howells.

The trail would run along the old Erie Railroad track for most of the way, almost doubling the length of the already built Heritage Trail that runs 11.5 miles from Monroe to Goshen.

Rose said the county is working with the Department of Environmental Conservation to get permission to cut trees in the territory of the endangered Indiana bat, and is still working on an intermunicipal agreement with Middletown for the property that the city owns.

The county also has to coordinate with Amy’s Kitchen, which is building a food processing plant off Hartley Road in Goshen and wants to lay water and sewer pipes under the Heritage Trail.

“Clearly we don’t want to be in the midst of beginning to try to build the trail and have them coming in and trying to lay pipe,” Rose said.

Two I-84 bridges over McVeigh Road in Wawayanda are going to be replaced, so the county will also have to coordinate with the New York State Department of Transportation (DOT) because the trail runs along McVeigh Road and under the bridges.

Rose said that if all goes well, he would like to start clearing trees on the trail by the end of the year, and is hoping to see it done by the end of 2018.

When work does begin, it will start on the second section, because while it will need more infrastructure work done, the county has all the rights to it, something it doesn’t have on the other two sections.

The cost of the entire project is estimated at $12 million, with 80 percent or roughly $9.6 million coming from the federal government. Last year the state awarded the project $500,000 and it got another $1 million from the Orange County IDA.

Middletown Mayor Joseph DeStefano told advocates that in addition to the trail running through the city, they are planning to make spurs off the trail, connecting the schools—Fei Tian, SUNY Orange, and Touro College—with nearby neighborhoods.

“And we’ve got a few extra bucks to spend on it,” he said with a laugh, referring to the $10 million Downtown Revitalization grant the city was awarded by the state earlier in July.