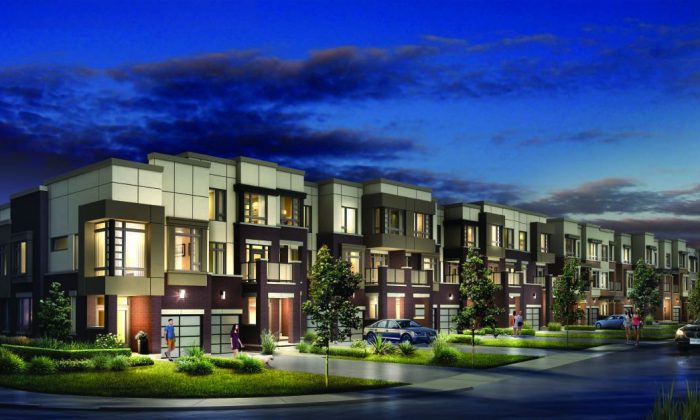 When you sell the fourth-most homes in the Greater Toronto Area, there’s nary a doubt you’re experienced, esteemed, and elite.

After a diligent decade of dazzling design, CountryWide Homes hit a few milestones in 2015, including a new total sales record. CountryWide is bolstered by a stable of veteran executives—some of whom have over 50 years of experience in the industry—who have helped the decade-old company establish unique design hallmarks.

“The first 10 years was entry-level, we were new to this game,” Richard Mariani, sales & marketing manager of CountryWide Homes, told the Epoch Times in an interview.

“Now we’ve officially established ourselves as a homebuilder, and now we’re going to the next level of calibre. The Mercedes-AMG series is what we like to compare ourselves to. We also have a new design studio we’re going to be building out this year with even higher levels of finishes.”

The focus of the new addition of approx 3,000 sq-ft will be luxury design, nestled next to CountryWide’s other 6,000 square-foot studio in the rear of its Concord, Ontario, headquarters. The studios are staffed with qualified interior design consultants to help CountryWide homebuyers personalize finishes and upgrades.

CountryWide’s brain trust had the prescience to buy fringe land surrounding the GTA years ago because there were emerging signs that land would become extremely scarce and its costs would consequently surge. It’s one of the reasons CountryWide hasn’t been hampered by the GTA’s housing shortage.

Mariani said that because the region is growing at an unprecedented rate, everything, including subways, are now routing northerly. As the need for density grows, high-rises won’t be isolated to Toronto’s core.

“We know the way this city is building and expanding. Townhouses may not be the affordable entry-level option in the GTA anymore; it could be the condo option,” he said. “No builder out there looks at what they’re going to sell for just the next year—they’re looking at the next five years, 10 years, down the road. We’re always trying to forecast what’s coming down the pipe.”

CountryWide had 18 active sites in 2015, and seven sold out. The company sold 650 homes last year, effortlessly smashing its previous record of 575. However, Mariani partly attributes the good fortune to Toronto’s searing market. While CountryWide doesn’t expect to take a step back in 2016, it forecasts a slower sales year.

“We certainly can’t predict the 2016 housing market, but I can say on behalf of our company that we’ll anticipate a bit of a slowdown,” he said.

“(Last year) was not realistic; it was a hot, hot market. We’re cautious with what we’re releasing and to whom. There are a lot of factors and variables we don’t necessarily know about, like the Canadian dollar (at a 13-year low). It may hurt the local buyer but could help the foreign buyer. We’re here to sell top-quality houses, and a lot of Chinese investors coming here love our product.”

He added that CountryWide has 11 sites carrying over into this year, with about six new sites slated to launch sales, give or take a few.

Impressively, and as a testament to its vision, CountryWide Homes is one of three builders—the other two are Aspen Ridge Homes and Lakeview Homes—developing a brand new town north of Newmarket called Queensville. In addition to 6,000 inaugural lots, there will be nine schools, a community centre and library, parks, trails, retail, and dining options. The first phase launched last year with 36- and 45-ft lots and townhomes.  The second phase will be released in the spring/summer of this year.

However, closer to home, CountryWide is developing in-demand projects, for which the Chinese community is particularly keen.

The 531-lot Observatory Hill—eponymously named after the historic Richmond Hill district—is a much-anticipated mix of lots ranging between 30 and 50 feet, and will also include semi-detached houses and townhouses. Mariani said the Chinese community has expressed the most interest in Observatory Hill, and many are anxiously awaiting its late spring launch.

“People are telling us they’re planning their vacations around our opening because they don’t want to miss it,” he said. “It’s another milestone for CountryWide, and I would assume the other three builders building at Observatory Hill, because this piece of land is the only piece left on Bayview. It’s important for us to make a statement there with quality design so that for years down the line people can say ‘I’m proud I bought at Observatory Hill.'”

Another project coveted by many in the Chinese community is an as-yet unnamed project located at Bayview and Steeles Ave. in North York, slated to be built on the site of the former Tyndale University College & Seminary. The surrounding milieu will incorporate much greenery, and lots will be built as wide as 60 feet.

“This is in North York. There’s not usually any new development there,” said Mariani. “It’s usually in-fill—someone knocks down a house and builds a one-off. We’re doing this through one-on-one private appointments. I’d compare it to buying a full floor at Toronto’s Four Seasons Private Residences.”

The luxury houses will cost over $3 million and will be designed by the renowned Stephen Hunt of Hunt Design Associates.

When it comes to Chinese buyers, Mariani says they’re particularly fastidious about amenities like schools, and as a result, CountryWide pays careful attention to where it builds.

“At all of our sites’ sales centres, we have amenities maps that highlight all schooling in the areas, from elementary schools through high schools and colleges,” he said. “Now it’s about finding the best schools to build around. We carefully collected sites around good schools. We forecast the land we’re buying around the city.”