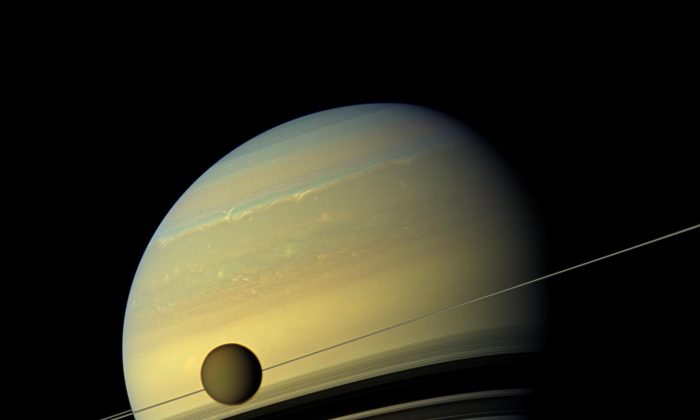 Could Titan Host a Whole Different Kind of Life?

With data from NASA’s Cassini and Huygens missions, scientists have uncovered a chemical trail that suggests prebiotic conditions may exist on Saturn’s moon Titan.

Titan, Saturn’s largest moon, features terrain with Earthlike attributes such as lakes, rivers, and seas, although filled with liquid methane and ethane instead of water. Its dense atmosphere—a yellow haze—brims with nitrogen and methane. When sunlight hits this toxic atmosphere, the reaction produces hydrogen cyanide—a possible prebiotic chemical key.

Discovering the Bath Scum on Titan

“This paper is a starting point, as we are looking for prebiotic chemistry in conditions other than Earth’s,” says Martin Rahm, postdoctoral researcher in chemistry at Cornell University and lead author of the new study in the Proceedings of the National Academy of Sciences.

To grasp the blueprint of early planetary life, Rahm says we must think outside of green-blue, Earth-based biology: “We are used to our own conditions here on Earth. Our scientific experience is at room temperature and ambient conditions. Titan is a completely different beast.” Although Earth and Titan both have flowing liquids, Titan’s temperatures are very low, and there is no liquid water. “So if we think in biological terms, we’re probably going to be at a dead end,” he says.

Hydrogen cyanide is an organic chemical that can react with itself or with other molecules—forming long chains, or polymers, one of which is called polyimine (pronounced poly–ee–meen). Polyimine is flexible, which helps mobility under very cold conditions, and it can absorb the sun’s energy and become a possible catalyst for life.

Saturn’s Moons May Be Younger Than the Dinosaurs—so Could Life Really Exist There?

“Polyimine can exist as different structures, and they may be able to accomplish remarkable things at low temperatures, especially under Titan’s conditions,” says Rahm, who works in the lab of Roald Hoffmann, professor emeritus and winner of the 1981 Nobel Prize in chemistry. Rahm and the paper’s other scientists consulted with Hoffmann on this work.

“We need to continue to examine this, to understand how the chemistry evolves over time. We see this as a preparation for further exploration,” says Rahm. “If future observations could show there is prebiotic chemistry in a place like Titan, it would be a major breakthrough. This paper is indicating that prerequisites for processes leading to a different kind of life could exist on Titan, but this only the first step.”