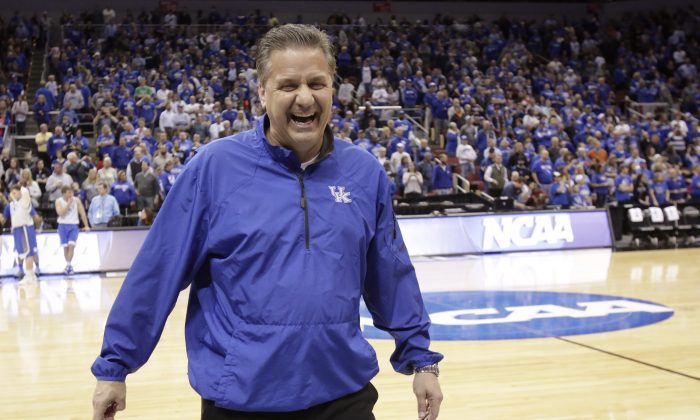 Could John Calipari Be the Brooklyn Nets or Washington Wizards Coach Next Season?

The Brooklyn Nets have put together some nice games this season, but the problem is they’ve also played too many bad ones.

The only reason the Nets are still in the playoff race? They play in the weaker Eastern Conference.

Brooklyn signed coach Lionel Hollins in the offseason to replace Jason Kidd. Hollins has not performed as expected, though the players are certainly at fault as well. As the adage goes, though, it’s easier to get a new coach than new players.

That leads to a new article today that claims University of Kentucky coach John Calipari could become the Nets’ coach once again.

Calipari has for the last 10 seasons or so dominated college basketball, increasingly recruiting top players and helping them improve in one-season stints before they move into the NBA draft. This season has reached an extreme as even several backups on the Kentucky squad are projected to go in the first round of the draft.

But Calipari has learned from what happened and wants another shot in the NBA.

“He desperately wants it,” a front office official told North Jersey. “He won’t say it out loud. The NBA is the only place he’s ever failed and it drives him nuts. He’s not the same guy he was then. He came to the NBA and he wasn’t ready. He’s ready now.”

If not next season, then perhaps the one after that. Brooklyn will have plenty of cap space in that offseason due to the cap jump and several big contracts expiring.

Hollins’s job may or may not be in jeopardy. If the Nets miss the playoffs, he could be fired. ESPN reported that the Nets were evaluating Hollins back in January after the team lost back-to-back games by 39 and 35 points. Hollins signed a four-year contract worth $20 million, making him relatively hard to dismiss this offseason. The fourth year is a team option.

Another intriguing fit would be the Washington Wizards, primarily because their best player, John Wall, played for Calipari in Kentucky several years ago. There have also been rumors that Washington could try to snag DeMarcus Cousins from the Sacramento Kings. Calipari would also be a much better help in recruiting Kevin Durant than Randy Wittman, who could get fired after this season along with general manager Ernie Grunfeld.