Could Auto Loans Be the Source of the Next Crash? 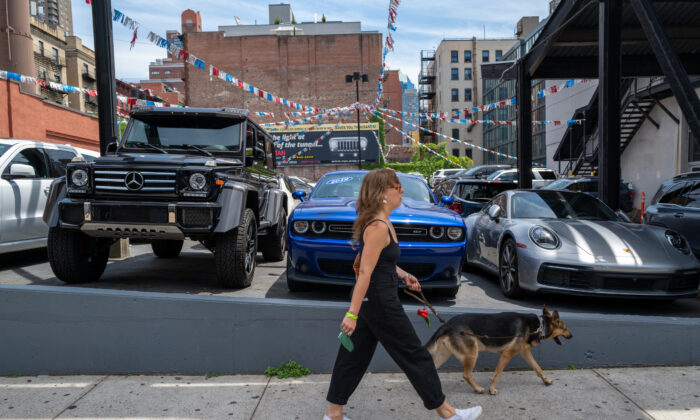 Used cars are displayed at a dealership in New York on June 10, 2022. (Spencer Platt/Getty Images)
By Liam Cosgrove

During the COVID flash recession, annual vehicle sales bottomed at 8.9 million in April 2020—only to rebound to 18.7 million by April 2021, the fastest yearly change on record.

Prices rose as well, eating into the discretionary income of the average consumer. As of mid-October, “the number of median weeks of income needed to purchase the average new vehicle in September increased to 42.2 weeks,” a substantial increase from the pre-pandemic average of about 34 weeks.

Many car buyers resorted to taking on debt.

A survey conducted by automotive analytics company The Zebra found that 50 percent of Americans financed their last car with a loan. Total auto loan originations nearly doubled to almost $80 billion in March 2021 from $40 billion at the 2020 lows.

The size of the auto loan market is massive, with total outstanding debt in the United States at $1.5 trillion. This represents 9.1 percent of nationwide household debt, according to the Federal Reserve Bank of New York.

Much of this debt is repackaged by banks and sold to investors looking to earn yield in today’s relatively low interest rate environment.

Lucky Lopez, a Las Vegas-based auto loan broker with more than 20 years in the business, describes the process in an interview with the investment research and online financial media firm Hedgeye: “They [lending banks] hire brokers like myself to go get their paper and sell it to either other banks like Wells Fargo, Bank of America, some private individuals, hedge funds, stuff like that.”

Answering the call of yield-hungry lenders, post-pandemic borrowers also had an incentive to take on more debt. A study by the Center for Microeconomic Data found that loan forbearance programs artificially boosted borrowers’ credit scores throughout 2021.

With investors desperate for yield and borrowers qualifying for approval, banks went on a lending spree in 2020 and 2021.

“They were just handing out money,” Lopez told The Epoch Times. “The big culprit was the banks loosening up their LTV [loan-to-value].”

Used car prices exploded during the pandemic, and car dealers were forced to overpay for their merchandise and, in turn, overcharged banks that were providing auto loans.

“The dealers started calling banks, ‘Hey man, I gotta sell this for 150 percent, 160 percent of LTV … Can you do this?’ and banks that traditionally wouldn’t, started doing it,” Lopez said, paraphrasing the industry dynamics he had witnessed.

For perspective, the online loan broker LendingTree quotes the average LTV ratio for an auto loan in 2019 at 87 percent.

Loans well in excess of the market value of their collateral present a serious risk for lenders, especially as an increasing number of borrowers simply aren’t paying.

“We’re seeing delinquencies rise before the layoff cycle begins,” Danielle DiMartino Booth, a former adviser to the Federal Reserve Bank of Dallas, said in an interview on the “Forward Guidance” podcast, implying that rising unemployment may hasten delinquencies.

The Consumer Financial Protection Bureau has also shown that loans originating in 2021 and 2022 are experiencing higher delinquency rates than in previous years.

As Stansberry Research put it, “Delinquencies lead to defaults, which lead to bankruptcies.”

Booth and Lopez both see a possibility for contagion, whereby subprime auto loan defaults will force mass liquidations as banks try to recover their losses.

In normal times, banks remedy nonpayment by repossessing cars and selling them at auction. However, with many 2020 and 2021 loans issued at 150 percent of LTV or more, banks are reluctant to commit to an auction sale, where it’s difficult to fetch even 100 percent of the car’s value.

As a result, banks have largely refused sales and continue to delay the auction process, according to Lopez.

The lack of sales is causing a supply glut.

“This massive overhang of inventory continues to grow on a weekly basis because the lenders don’t want to recognize the loss on the loans,” Booth said.

“They’re going to make them clean those loans off their books, and then we’ll see used car prices fall,” Booth said.

Private money managers have apparently taken an interest in the auto loan market as well.

“Investors are shorting the auto industry,” Lopez said in reference to the many calls he receives from hedge funds and wealth management firms asking for insider details.

He believes that if there’s a full-scale financial crisis as a result of mass auto liquidations, it will occur sometime in the first quarter of 2023.

Lopez is concerned about how the government would react.

“We’re looking at probably some sort of step-in where they’re going to start regulating the automotive industry. … It’s going to totally crush the car market,” he said.